My best friend has been back in the States with me for four months. Since that cold February day, the sun has emerged and it is summer time at last.
In the last four months I have watched her run after a truck that was taking her porta potty away while wailing
“Nooo!!! Bring it back!” after a day of consuming beers at the lake.
We have gone wine tasting in Central California.
I have farted in a spa with her under the tree tops of Avila Beach. No Mimi, that Sulfur smell was not part of the natural mineral ponds.
We have danced our butts off in the clubs of Las Vegas.
We have  run through this alpine forest over trails thick with manzanita, and yes bugs too. We are attempting to train for our Mt Baldy run in four weeks.
I missed my Snow Flake so much when she was stationed overseas for eight years.
The last four months have been incredible fun and I can not wait to see what kind of trouble we can continue to get into this summer.
Last week we spent a luxurious day relaxing on San Diego’s beaches, and oh yeah betting on the Ponies at Del Mar, where the surf meets the turf.
I was hesitant to visit Del Mar after last years disastrous events in which my car broke down in downtown San Diego, ultimately costing me something like three grand to get fixed.
Yeah, this year would be better.
After a late start Brie and I made the hour or so drive from hot and smoggy yeah- it’s- pretty-much-the-desert Redlands to the little seaside hamlet of Del Mar. We found a cozy little beach nestled against the tan cliffs of Solana Beach just to the North of Del Mar. Solana Beach was awesome; free beach parking? What? So weird after being accustomed to Orange Counties rigid parking enforcement all metered parking and such. 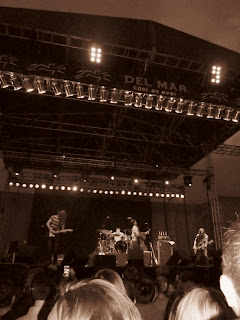 As we made our way through the crowds of people trying to locate our friends on this sunny San Diego afternoon, it seemed like every one we passed was talking about that afternoons horse races at Del Mar and the free Dashboard Confessional concert afterwards. (Angst? Yes please!)
We had been side tracked on our drive by the Whole Foods in La Jolla. Besides being side tracked In Whole Foods by brown rice sushi, cranberry chutney, olives and feta cheese every where, we were also running later because of San Diego traffic. The one set back to San Diego is, holy shit, there are people and traffic everywhere! I’m not used to this in the 909, where I work and run most of my errands. It’s so weird to me to see all these people out jogging and riding bikes at the beach too. In the 909, where I come from, your more likely to see tattooed bikers sucking on a cigarette as they huff and puff their way through the oppressive heat than people who are actually in shape out exercising. San Diego is such a nice change of pace from the smoggy and hot San Bernardino Valley we left eighty miles behind us.
I enjoyed my twenty nine dollar (I have no control) Whole Foods lunch, than it was off to the race track, about a mile across Pacific Coast Highway, where we parked as far away as we possibly could. That was an accident. I parked in the dirt lot where I always park, not realising we had arrived early enough to actually get close parking. I have never been at this race track when it’s not extremely crowded and mobbed with people.
Good thing we showed up early. We checked out the young two year old horses for the first race, bet a few dollars and went up to the second floor of the grand stand to watch the race un fold on the synthetic track. Unfortunately we would not be winners on that day, boo.
From there we made our way across the grandstand to a out door bar that overlooked the paddock and got a great table just over looking the paddock and the horses being led out. It was a perfect place to sip on a glass of Pinot Grigio on a Friday evening. And not pick more winners. Can’t wait for more summer days just like this one with my B.F.F.F (Best farty Friend Forever)