By Amber Wood on Sunday, April 20, 2014
I had just fallen down a twenty foot snowy slope. Right after the fall I was still grasping my left hand, a little panicked that it might be broken but still hobbling slowly and carefully up hill.
I don’t think I have ever hated switch backs like I did in that moment. Which is a pathetic way to feel as these switch backs on San Gorgonio honestly were not even that bad besides the icy snow in the shady places ( which was most of the mountain.)
In June last year I had hiked Mt Whitney, the highest peak in California at 14,505 feet with it’s ninety nine switch backs.
Today’s hike to the summit of San Gorgonio was way harder for me than summiting Mt Whitney.
By the time I fell down the ravine and recovered we were already an hour behind schedule.
So I decided we were going to go fast on our ascent up the mountain. 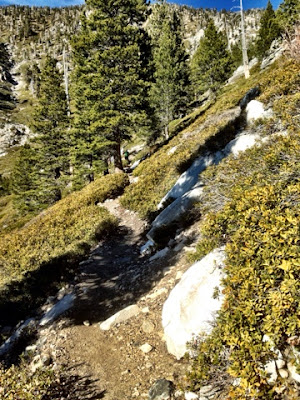 The first six miles of the Vivian Creek hike we had just flown up the trail and it had been easy going.
After stopping for a lunch break below High Creek Camp we set out again, Rosco the dog right at our heels ( that little pup had so much energy it was ridicules!)
Everything was fine, I had tons of energy until I tumbled down a snowy ravine, picked myself up, seconds later bloody and in pain and we steadily headed up that damn mountain. (Now that San Gorgonio had made me bleed I was not quite as in a good mood.)
I guess it was at the end of the switch backs that I started hating life and just wanted to turn around and go back. We couldn’t even see the summit yet and we crested a saddle 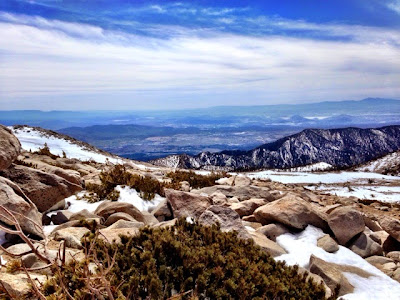 and we were out of the snow and back in the sunshine for a little bit.
Once the switch backs were over the views were just incredible! We could see Catalina Island all the way out by the Pacific Ocean over a hundred miles away.
Across the valley and down below us we could see the snow peaked San Jacinto ( The mountain we had thought of peaking, originally today) 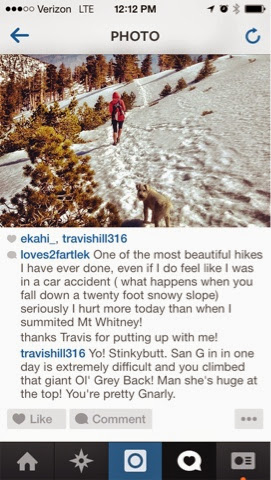 Some where, some where up there was the damn summit, I just knew it… 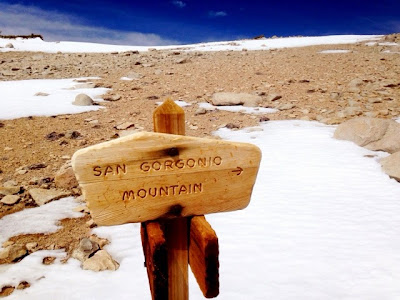