I’m pretty sure the 2013 Tournament of Roses Parade was sponsored by the Church of Scientology.
It was a cold December night, the last night in December, 2012 to be exact. I was camping on the streets of Pasadena California with four good friends. We wanted to be up close and personal for the next days Rose Parade, starting at eight A.M. Our spot was awesome, front of the crowd, right on the very edge of Colorado Boulevard. We would be close enough to smell the excitement, I mean horse poop.
I had never been to the Rose Parade before, even though I had been born in Los Angeles County and lived my whole life two hours from Pasadena. I hate crowds, I hate traffic and I hate sitting still so the Rose Parade was not really my thing.
This year one of my co workers was riding on one of the floats, so that was a little intriguing, plus we had another friend who was in the parade as a director of one of the marching bands so a bunch of friends thought, lets get a group of people together and go.
Camping on the streets of Pasadena like homeless people; it will be fun, they said! We will quietly play Cards of Humanity (A card game for horrible people) and try not to upset the children or the parents! We will have a completely sober New Year! It sounded like an okay plan and cheaper than drinking and more fun than being hung over (Like most people I know) New Year’s day so off to the Rose parade it was! 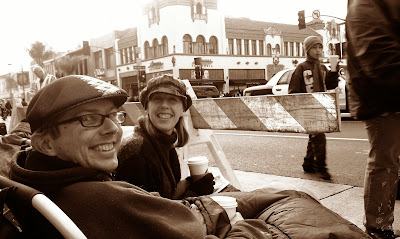 I decided that the parade was sponsored by the Church of Scientology after about ten minutes of pre Rose Parade camp out experience when I was asked by about three different people if I wanted free hot chocolate… In exchange for coming out of the cold to watch a movie about Scientology.
I chose not to drink the kool aid (Or hot chocolate) and embrace the cold, well until I spotted the Cheese Cake Factory across the street from us and started fantasising about their Lemon Cheese Cake Torte. Than I spent all that cash I was not spending on New Year’s Eve margaritas on a Cheese Cake Factory feast of feta farro salad appetizer and then pork stuffed Vietnamese buns. It was a good choice I though to myself, returning to our camping spot on Colorado Boulevard with my lemon cheesecake and feta and pork-a-licious feast. 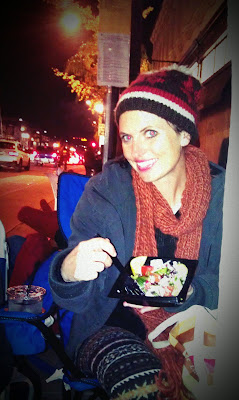 We spent the next several hours watching the group of children camping next to us playing in traffic. See at the Rose Parade, all the kids camp out on the side of Colorado Boulevard and throw marsh mellows and silly string at cars. The mom next to us seemed to have no control over all her kids and they were constantly running out into the boulevard to collect the stray marsh mellows. The sheriffs that were all over the place were constantly telling her to get her kids out of the road. Yea sheriffs.
We also spent this very chilly evening playing cards and walking to the port a potties that were so far away from our spot.
The best part of the mile walk to the portapotties in the frigid evening and very early morning hours was walking over the 210 freeway.From the overpass you could look down at where all the horses for the parade were stabled over night on the Eastbound 210 Freeway over pass.
This New Years Eve I am proud to say I did make it to midnight, yea and we had a glorious apple cider toast on the streets of Pasadena before I retreated to my SUV to sleep for a few hours right around two A.M.
It was loud on the street.
At about two A.M. when the children were still yelling and playing with noise makers and horns, I was ready to go sleep in the back of my SUV.
My friends had decided they wanted the whole Rose Parade experience of sleeping on the cold noisy street next to the traffic so I waved goodbye, promising to be back at dawn.  I was perfectly content to camp in the back of my SUV, where I was very warm in my sleeping bag.
I had about three hours of sleep; the parking structure was surprisingly quiet. I didn’t even need the ear plugs I had brought with me. I went back out to the street about five A.M. to find most of my friends still awake and ready to find coffee, port a potties and breakfast. 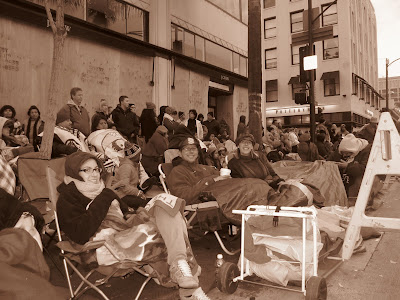 The most popular place to hang out at the Rose Parade on New Year’s Day? Starbucks of course; the line wrapped around the block. A warm latte on a forty degree morning was so perfect. Coffee in hand we were ready for the Rose Parade to start. All our friends were waking up, and I started passing out the Meyer Lemon and Zucchini Donuts I brought with me.
At eight A.M. the parade finally started and the sun was just starting to shine on our cold faces! It was glorious! We had lucked out and chosen the sunny side of the street.

As the parade began I had to explain to my friends, those are not donkeys, they are mules, the love affair between a Thoroughbred horse and a donkey. 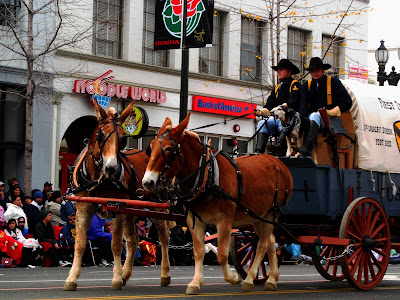 I love draft horses. Huge furry horses are just my favorite. I was way more excited about seeing the big ass horses in the parade than I was my coworkers. 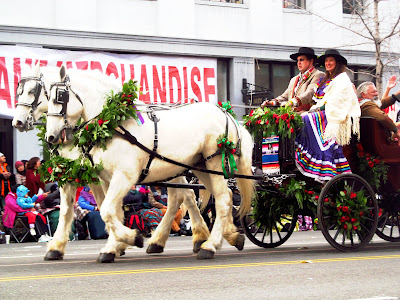 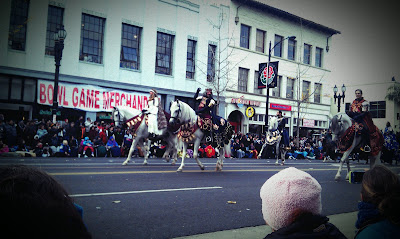 On second thought, it might just have been easier to take me to the zoo for New Years Eve.
And less cold. 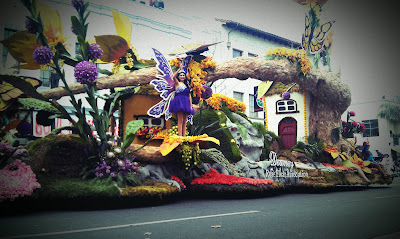 These people definitely did not have the best job at the parade.
They were in charge of picking up the crab apples? 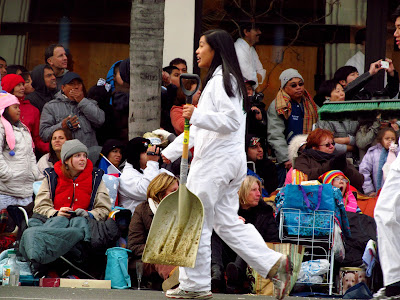 Rose Parade and New Years Eve was a complete success; I would so do this again!