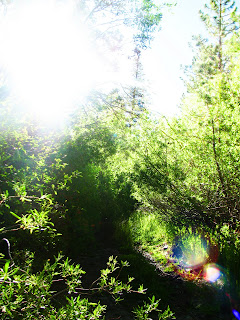 At the moment I have a very happy, purring cat shoving his head into my armpit. Thank god (For Zion) I just took a shower. Until just recently (Like a few minutes ago) I had a sports bra full of squished bugs, mud covered hiking boots and streaks of mud all over my legs. Yes, this means I had a phenomenal day hiking. Such a good day hiking, that it is two hours later and I’m still exhausted. 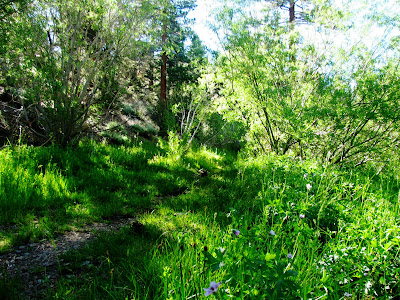 Today is the first day of summer, 2011, and my day off. Yea! I don’t have to go down the mountain in the miserable 100 degree heat! We are having a June heat wave here in Southern California. While in New Mexico and the Southwest they are dealing with horrendous fire storms (Wildfires that I am very familiar with, unfortunatly) here in California we have long smoggy, stifling June  days. Some times I feel like I can’t breath the air is so thick, hot and dirty in the valley below. What happened to the June Gloom, overcast sky’s and showers in the early morning hours of a few days ago? Its official, summer is here. 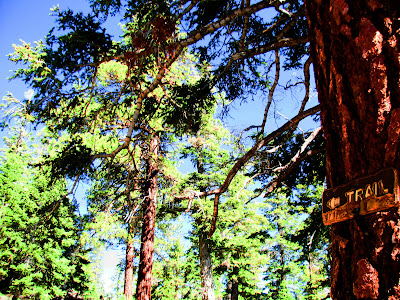 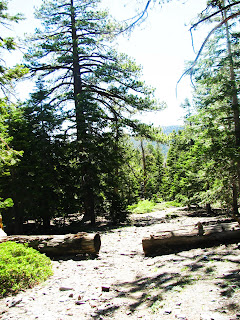 In order to beat the heat of the day I got up at five to prepare for the hike ahead of me. I even tried pounding a five hour energy drink to see if it would give me the extra needed boost to keep up with Alicia. Ha, as far as I can tell that little vial of B vitamins are niacin did nothing. I still struggled to keep up as Alicia and I began our mountain climb.
We drove from Running Springs, up the Arctic Circle to Big Bear, made a left at the dam and drove through the quaint little town of Fawnskin and East through Big Bear City. Onyx Summit is the highest paved road in our area at 8,000 feet and the cutoff to Hatchery Road is close to here, still at 7,000 feet. We took a crazy rocky dirt road in Alicia’s mountain jeep at this point (I say mountain jeep, as  jeep parts were flying off along the way) parking at the base of Mt Sugarloaf.
I’d never heard of Mt Sugarloaf before this hike. The town of Sugarloaf is right outside Big Bear City, on the 38, on the way to Redlands in the valley below. I had driven through the town a few times before but had no idea there was indeed a mountain with the same name, looking over the town. Oh yea, Sugarloaf is a “town” of about 1000 people; it has a mountain store and a bar of course. Apparently the town was named after the mountain, which in the 1800’s was said to resemble a Sugarloaf (How sugar was sold back in the day) 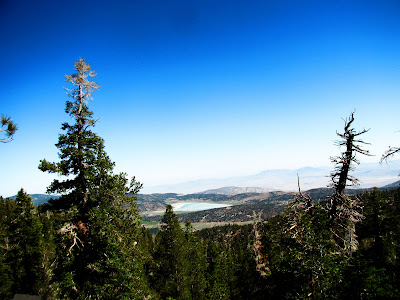 ﻿      As we started our assent up the mountain my ears were popping left and right. I had no idea about the severe elevation change.  As was often the case when Alicia and I hike, I was a little un prepared for the hike ahead. At least I brought plenty of water this time! Actually when we started out hiking up the mountain, I had no idea we would complete this entire hike. I thought we would do a few miles before I got tired and complainy and headed back home.
When we parked the jeep at the trail head and started up the trail, the whole trail was in the shade. I was actually shivering in my shorts and tank top. I would later relish this cold. The trail hugged Green Creek as we started up the mountain; we slogged our way through the mud ( Alicia cursing wearing her new hiking boots today) almost having to ford the creek at places. Alicia had done part of this trail ten years ago but had never made it more then a few miles in. We made our way steadily up hill, climbing through Green Canyon, hoping we would finally see some wild life (And not the want to eat you kind) we did see a ton of butterfly’s and also a ton of bugs. Mostly I saw these as they tried to fly into my mouth and eyes. Have you ever had a bug in your contact lens? So not fun. 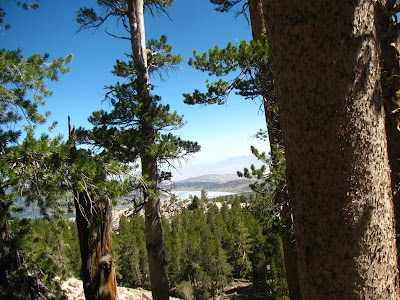 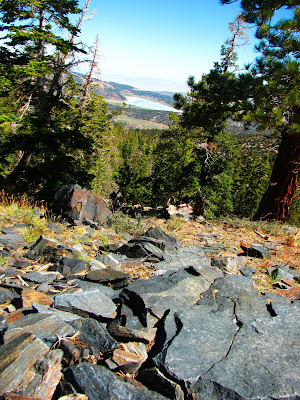 Sugarloaf Mountain was first climbed by Weldon Heald in 1938. I really hope he choose a cool, early morning to start the climb, such as we did. We were so lucky, for the first three miles as the trail took us by wild red Columbines and Indian Paint Brush we were completely in the shade. Alicia is lucky because this meant I complained way less. I call her my drill Sergent because she never gets tired and can hike all day. We hiked three miles straight up to where the trail crossed Wild Horse Canyon and Alicia never took off her sweater, broke a sweat or had to work to catch her breath. I on the other hand, was breathing super hard, while trudging up the mountain. I hike really fast, that’s my problem. So I get tired way more quickly. Its hard for me to walk slow. If I would just slow down and take my time, I probably wouldn’t be such a wreck. As it was, I was constantly begging Alicia  to stop, yet again for another water break. I’m such a wuss! Okay, a wuss who hiked 12 miles today, and six of those miles were straight up hill! 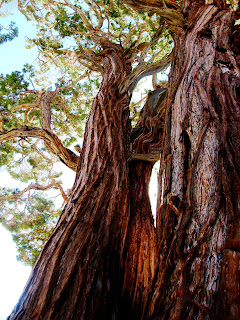 Yes, that’s right. We did make it to the top, 6 miles straight up hill with almost a two thousand foot change in elevation. It was intense. After we crossed the Wild Horse Canyon trail we had an amazing view of Mt San Gorgonio on the left hand side of the trail. Mt San Gorgonio stands at 11,449 feet and is the highest point in Southern California. As we starred across at its snow topped peaks, we felt as if we were almost at the snow level. Wow, how high up are we, we wondered? We almost turned around here and went back, but we decided to just go around one more corner. Thank god we did.
We continued up, in full sun now and wow it was a hot day. I would say in the 90’s, but if you ask Alicia I’m sure she would roll her eyes and say
“More like 80 degrees”
Over 45 feels hot to me, what can I say? As we crested the first ridge we were shocked to find ourselves in a sub Alpine forest. There were majestic, tall Lodgepole Pine’s everywhere. These only grow at very high altitudes. They need severe cold to survive. There were huge black and grey volcanic rocks everywhere. It was absolutely gorgeous and I was so glad we had not turned back. A cool breeze was blowing over the slopes of the mountain too. Yeah, that was nice. We stopped for a snack at this summit before continuing on.

﻿﻿﻿      The trail just kept going up, up, up and it was getting steeper, suddenly the Lodgepole’s parted to the right and we had an amazing view of Baldwin Lake down below. Baldwin Lake is the only natural lake in our mountain community. It usually dries up by this time of year, but we has such a wet winter we could see the pale salty water down below stretching quite far, and the Lucerne Valley went on for miles and miles in the desert below and to the North. The view was spectacular. 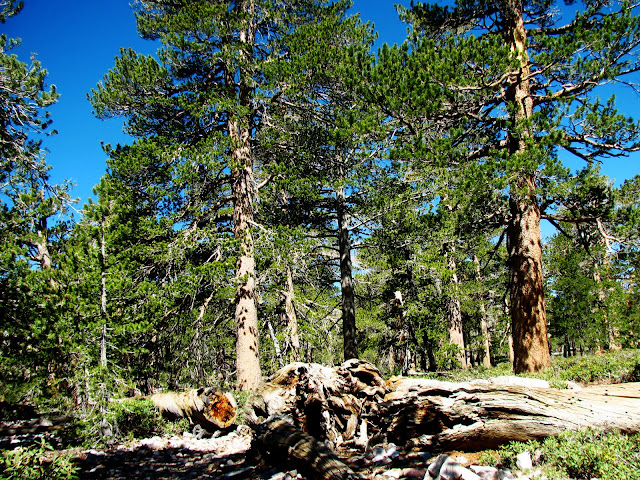 Right after this the trail got really steep and I once again half joked that Alicia should carry me. Was I really joking? I started to get really tired at this point and we almost turned back.
“Lets just go around one more corner”
I said. Famous last words. 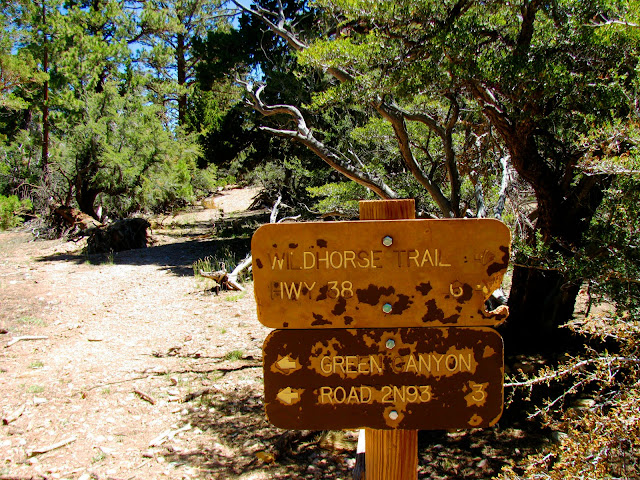 That’s when the trail crested out, and I began to sweat less, swear less, breath less and really start to enjoy the hike again. Part of that was because the trail had suddenly become so absolutely beautiful. I felt like we were in Yosemite! We were back in that sub alpine like forest. Sub alpine trees are used to the fierce winds and extreme cold these altitudes can bring.  There were fir, spruce and juniper trees everywhere, their short needles reaching up into the sky. The needles on these trees being so short helps guard the trees against the wind. As we made our way across the almost flat alpine forest we had a view of Lake Baldwin on one side and snow covered San Gorgonio to the South. Pictures really can not explain how amazingly beautiful it was.

We wandered through the forest, looking for the plaque for the top of the mountain and never finding it.  We did make it to the peak at 9952 hundred feet. This is one of the highest peak in the San Bernardino National Forest, and we climbed it! I felt like I had accomplished so much, before noon even! Even if we did never find the actual official Sugarloaf Mountain Plaque.  Oh well, it was well after eleven at this point and we turned around to start the descent back down the mountain. We didn’t get to see any wildlife, boo, but there were gorgeous butterflies everywhere. I tried to take pictures of them but my batteries were dying on the camera and well butterflies really don’t like when you yell at them to stay still I guess.
The hike was finished in a little over three hours, it was sweltering (For me) hiking back in pure sunshine. We only passed four people in that entire hike, pretty crazy for a Tuesday hike in Big Bear.

If your interested (And I know Alicia is! Here is the Topo map of the area we covered today