Ten minutes ago I was thinking of trading my Subaru in for a Jeep.
That was ten minutes before we almost died on Cemetery Road.
As tempting as a Jeep may sound, I know the sad truth; I can not own a fancy Jeep because I know from past experiences that I would just have way to much fun with it.
Yes, I would look for suitable Jeep Grand Cherokee car covers, keep it clean, and try my best to keep it in one piece… but I know I would get carried away!
I recall 2001 when I had a Bronco and all the fun we used to have driving down muddy Jeep trails and getting stuck and getting in trouble and getting pulled up a rock face by two Jeep CJ’s.
I also recall; the auto shop bill for over a grand to replace broken hubs and motor mounts.
I think I have to much fun to own a jeep.
Being chauffeured all over the back roads of Mammoth in a Jeep Rubicon for three days was beyond fun and made me miss so much having a real off road capable vehicle that is not also my commuter car.
We went off roading in the jeep this morning near Doe Ridge just East of Mammoth Lakes.
The views were fantastic. 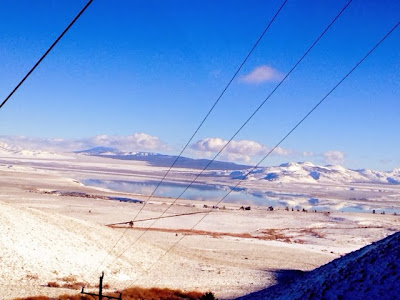 We were off roading in the hills near mammoth some where along the 395 and Mono Lake was like a icy blue puddle two thousand feet below us.
I’m not sure exactly when J took her pants off, probably some time after we left the hot springs near Bridgeport. This was after she was seen galavanting through the snow towards the hot, and I mean almost boiling, waters of the hot springs like a yoga buff gazelle in a bikini, scarf and hiking boots.
That was two hours ago  and now we are on this mountain ridge in the middle of no where and the snow is getting deeper and there is no place and I mean no place at all to turn around.
The Jeep shakes and bucks as we try to make it to a good turn around area on this vacant dirt road. We slowly and steadily head up the mountainside, trying to take in the views of stunning Mono Lake below us and also wondering, where the hell will we able to turn around?
It was all fun until the jeep began sliding sideways down the hill and J’s boyfriend needed to get out and push and one of us would have to drive for a bit.
Luckily I remembered that I have a lead foot and when he asked
“Who gets to drive?” I recommended J. 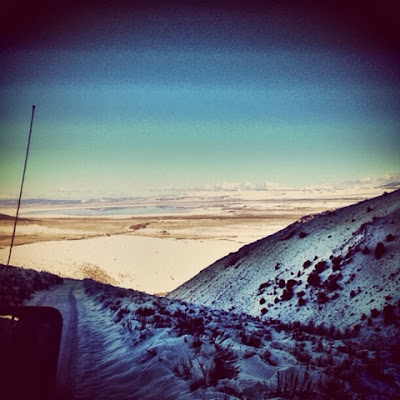 At that point, I was just ready to be down off that damn snowy mountain; happy hour at Tiger Bar in June Lake was just a few hours and miles down below us in the distance beyond Mono Lake.
As J slowly drove down the snowy trail in her chonies and her boyfriend pushed the Jeep out of the danger zone the views of the frozen lake below us were brilliant.
We took in the breath taking mountain views and tried to ignore that horrible hot oil burning smell from the Jeep’s angry engine.