It seems crazy to me that I only knew Johnnie for ten years. I only had ten years of friendship, so many laughs, drinking beers at Hollywood Park and watching Zenyatta run, eating tacos at Los Alamitos Race Course, training for half marathons and trail running all the trails around Green Valley Lake. Alicia and Johnnie encouraged me to be a trail runner and it changed my life. They were not just friends, they were family. Johnnie ran my first half marathon with me, a spur of the moment decision for him! It was both of our first half marathons and we were both limping through it at the end. Ten years was simply not enough time and a year later it still breaks my heart to remember that our mountain community lost this great man. I wrote this blog in 2011 after Alicia and Johnnie and I spent an amazing evening at the Big Bear beaver ponds. These are very fond memories.

Last night Alicia, Johnnie and I tried to spy on Beavers. We did not succeed. We still had an awesome evening, though. As we traipsed through an empty forest, dusk just setting in, we talked about how lucky we were to be out here enjoying nature, while so many of our neighbors were sitting at home watching Dancing with the Stars. We talked about how we are so lucky to have this forest to hike in, and how some people have no idea what they are missing.  It was an absolutely gorgeous night, and instead of listening to the soundtrack of TV and Justin Beaver, we listened to the sounds of the forest… Stellars Jays, crows and frogs. 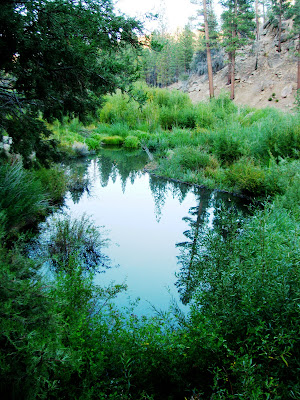 We had wanted to do the Beaver Hike all summer, but you have to go right at dusk when the Beaver’s wake up, and it was hard for us to find a day when the three of us are all free. Normally Alicia and I just hike by ourselves, but this time, we would be hiking out of the forest at night and just in case of mountain lion attacks, we figured strength in numbers. Let me just say, I’ve lived in the mountains for twenty-five years and never seen a cougar, but just because I don’t see them, doesn’t mean they don’t see me. A cougar was just spotted in Lower Rowco, my parent’s neighborhood of Running Springs last week. Yes, they are out there.  Last year, when Alicia and Johnnie did this hike, they were hiking back to the car at night and heard a tremendous, thunderous roar (Then they ran) They still don’t know what the noise was, bear or cougar. Let me tell you, all that marathon training they do came in handy that day! 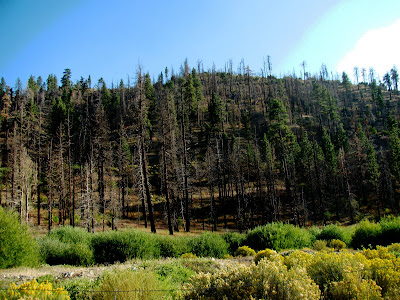 To get to Holcomb Creek, where we would attempt to stalk some beaver’s, you first have to drive to Big Bear Lake. From there you go to the Fawnskin side of the lake and make a left at Rim of the World Drive. You follow this road for about six miles and it eventually turns to a graded dirt road. Of course, that is six miles at twenty miles an hour when you are in a car, but it’s nice that this road is maintained enough that a car can get you there. The last time I had roared down this road in my old pick up truck, was about ten years ago, in my old beast Emmy Lou. I had a great time splashing through the springtime mud and snow in my little two-wheel-drive Dodge truck.  Since then, this part of the forest had been ravaged by wildfire in 2007. Parts of the forest still have huge pines on both sides of the road, creating a canopy of trees and that amazing alpine scent, then suddenly everything in the canyon is dead and burnt. It is so very, very devastating. This fire tore through quite a few years ago, and the plants are finally starting to regrow. There are more wildflowers now, as there is more sun without all the tall pines creating shade. The fire destroyed part of Camp Whittle, the little youth camp you pass on the drive, but I guess the camp has reopened since then. The road winds through the burnt forest, and just as you reach Hanna Flats Campground you can see some of the forests remained untouched from the Butler 2 Fire. The campground looks tranquil, and quite empty actually, but it is early fall.  These couple of campgrounds are the reason this road is so well maintained. 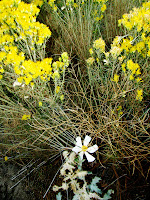 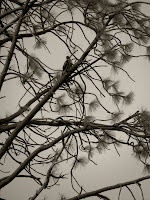 Alicia and Johnnie were amazed at how high the water was compared to last year and we had high hopes to see some Beavers hard at work.  The hike took us through fields of yellow Rabbit Bush, prickly poppies,  and wild rose bushes. This part of the forest was not very burnt and there were tall pine trees everywhere, the sun setting against the backdrop of pine needles. The hike on the Pacific Crest Trail was pretty easy, with no switchbacks, and we did the two-mile hike fairly quickly. We had left my house early, as we did not know if the gate would be locked past Hanna Flats, and that would have added an extra four miles round trip to our hike. Luckily the gate was open and we cruised right through and got to start our hike with quite a bit of daylight still left. As we hiked along, we saw a Cooper Hawk fly overhead and perch in a nearby pine.
The Pacific Crest Trail hugged the banks of Holcomb Creek, and we were happy to discover even at dusk, the bugs were not bothering us at all! What a nice surprise, since I forgot my bug spray. When we reached the area of Holcomb Creek with the beaver dams, Alicia and Johnnie showed me the dens built into the dirt below us, and the sticks the beavers had chewed through with their teeth. Yet there was not a beaver insight, even though we were being really quiet. 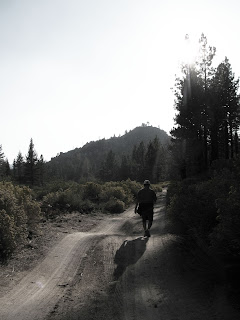 It was so relaxing, just sitting on a hard rock, starring at the pools below, to see if any of the beaver’s would swim out from their den. The only sounds were the sounds of the water, Stellars Jays and the crows flying above us. We watched some bass swim lazily through the pool, jumping every once in a while, while we joked those damn bass are going to scare away the beavers! When we first arrived at the beaver camp there were dragonflies all over the place, as the sun began to set, these were replaced with bats. We talked about how a few years ago we had so many more bats in our local mountain, wondering what happened to our dwindling bat population. With Halloween just around the corner, the bats were a nice touch.
We finally had to give up on sighting any beaver’s. It was getting darker by the minute, and even though we had flashlights, we wanted to make it back to the car before it got too dark. On the hike back we saw two more Cooper Hawks, and I got a few pictures of them in the pine trees overlooking the creek. 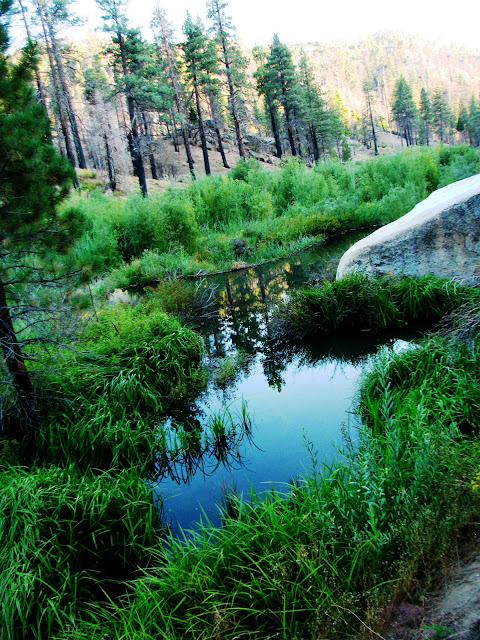 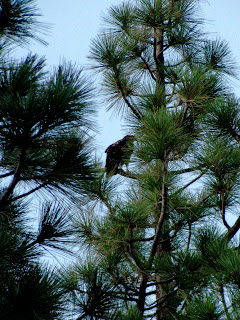 All in all, it was an excellent night for hiking in the mountains. Even the drive back past the tiny town of Fawnskin, on the shores of Big Bear, was so pretty, the lake is so gorgeous in the moonlight with a million stars over head. I can’t wait to go back and do this hike again, and also explore this area of the Pacific Crest Trail. This area of the trail I had just discovered for the first time the other night! Who wants to go?
Beavers empty forest Holcomb Creek Justin Beaver the Beavers
1
Previous Post
Next Post