I’ve never been afraid of heights. I will hike the sheerest cliffs no problem at all. I’m not afraid of Ferris wheels and I’ve been to the top of the Stratosphere Hotel and stood on their outer deck up so high above the Las Vegas strip, no problem.
A fear of heights seems a little different when you are swinging from a thin blue rope twenty five feet above the Pacific Ocean as the waves crash into the red rocks below you.
Being an outdoor girl you would think I would have tried rappelling or zip lining before. Nope never done anything like that, although I have so many friends who are obsessed with rock climbing and I have always heard how fun it is.
Last weekend at the end of a day of fun in Malibu at Point Mugu State Park I tried rappelling for the first time.
I did not shit myself.
I’d say that’s a win.
As my sexy man held the other end of the rope system that would soon hold me in place, he asked me if I was nervous.
I was not nervous in the least bit as I began my ascent up the course red mountain.
The first part of the climb was easy. I had watched one of his friends go before me and I tried to go right where he had gone. At first the hand holds and foot holds were easy to find and I was making good progress.
Than suddenly, it seemed like there was no where else to easily make my way up this sheer cliff side.
From down below I heard every one yelling up at me
“Don’t look down”
It was not the height that was making my heart suddenly beat faster, it was the fact that I was just barely holding on to the side of the mountain with two fingers!
My fingers were gripping a chunk of red, red rock. I could feel the course sand paper like rock slipping beneath my fingertips and although I was barely hanging on with two fingers I did want to climb higher.
My legs wouldn’t let me.
My knees were not shaking yet at this point, and my legs did not feel weak but I could tell I was getting close to that point.
Down below he was shouting for me to just go up one more step and I could feel the harness holding me in place, I knew deep inside I couldn’t fall but I just could not will myself to do it.
I felt frozen. I just could not make my body to take another step.
In my head it totally made sense, this harness and these thick blue ropes were holding me in place. I’m safe I will not fall if I just let go of my death grip with two fingers on this rock and slide my leg up one more step and than maybe I will be in an easier place to continue the climb.
I just couldn’t do it.
Twenty five feet down below me the waves of the Pacific Ocean crashed up against the giant red boulders and a group of five people, all wearing similar harnesses and rock climbing shoes all watched me stuck on this ledge. 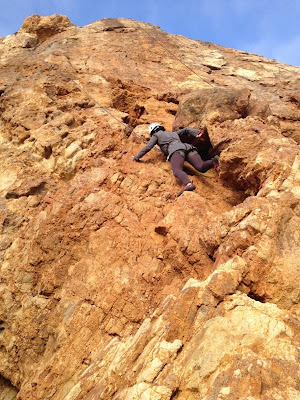 I was done. Twenty five feet up was as far as I was going today.
I told my self I wouldn’t scream and giggle on the way down as that young blond girl I had watched on the front face of the rock do an hour ago.
Yet there I was screaming and giggling as I was lowered down to the safe ground below me.
I thought descending would be the worst part and I couldn’t imagine it five minutes ago, but you know what?
It was actually fun!
As soon as my feet were securely back on the rocky red ground I knew I wanted to go up and try again.
I might be addicted to rappelling.