Winter in a Resort Town in Southern California 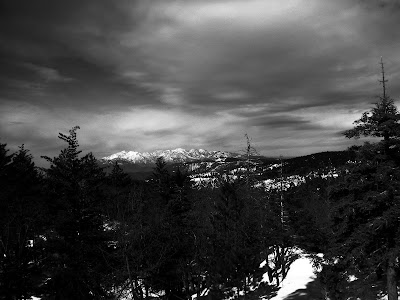 Winter in the mountains make you feel like you are far away from the sand, the shore, the malls and the sweaty deserts of Southern California.
Winter in the mountains almost makes you believe sometimes, you can close your eyes and wake up in Colorado. There are mountain slopes, glowing white with fresh powder against a cloud dotted blue sky, hawks flying overhead and even though its still winter birds can be heard chirping in the tall pine trees.
I grew up in these mountains. When I was a kid we would get four feet of snow in a single storm. The power would be out all day. Our house would be lit with candles, a big fire going in the old fireplace to keep the house a little warm. We would spend all day playing board games, domino’s, Monopoly or backgammon, or we would spend hours putting together jigsaw puzzles. That was until my mom kicked us out of the house to shovel the driveway or tried to teach us how to seal a concrete driveway. Sometimes our snow blower worked, most of the time it did not. So us kids would be in charge of shoveling the long driveway and unburying all of my dads 10 or so cars. Okay I don’t think he ever actually had 10 at one time. I don’t think.
When I was young the storms would leave mountains of snow in our front yard, sometimes the snow was higher then I was. I would spend hours outside shoveling, my fat cat Boots my only companion on a freezing morning. The only sound, maybe a snow blower in the distance. Boots loved to chase snowballs. There were no birds to catch in the winter, and he was a hunter. I didn’t mind those solitary mornings, just me and my cat in a snowy forest.
??????

Now the winter months mean three months of driving on icy snowy roads, watching out for all the idiots in my way. We call them Snow Pigs up here at six thousand feet. Once they pee in your front yard, I  think your allowed to call them whatever you want.
They overflow all over the mountainside on the weekends, like ants crawling over the white snow. By the time they limp down the hill Sunday evenings the snow is brown from the exhaust fumes of a million BMW SUV’s. They drive up here without chains on, sliding into the locals, who are just trying to commute to work.
It would be nice if we could go the speed limit, is that to much to ask? Not 20 miles an hour, the Snow Pigs max speed. They tailgate in foggy snowy conditions, not even using their headlights in the dense fog of course. They brake up hill. They graffiti our signs. They throw trash and beer bottles in our front yards. When they do chain up, its in the middle of the highway. They let their children play IN THE HIGHWAY. They do all they can to make our gorgeous mountain community look like the ghetto dumps they escaped in the valley below.

You can tell the locals. Our trucks are dirty; the beds are full of the snow we cleared from our driveways, usually a shovel sticking out. You never know when you might need it, see a neighbor who’s stuck and needs help or have to fight off a bear or whatever. Or if your me, wave it at Snow Pigs while screaming “Don’t put on your chains in the middle of the highway!”
We ski or snow shoe as opposed to snow boarding. We don’t buy cables ( Cheap chains that do you no good, but they are easy to put on so the Snow Pigs buy them)
Locals are used to driving these roads and used to the winters; we can recognize the snow pigs coming from a mile away!