Running in Snow Shoes; not a Pretty Sight 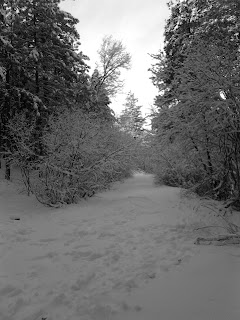 Four days ago I accomplished my best run yet, almost seven miles at Rim Nordic with Alicia.
It was a gorgeous fall day, running through the snow.
Seriously, in spots, the snow is a foot deep here, and keep in mind, it hasn’t actually snowed in weeks. Rim Nordic is the local cross country ski area, and every where we looked we saw signs being set up for cross country ski season starting in a few days. Yup, a winter storm was rolling in and every one was preparing.
I prepared by running an easy seven miles, while bitching the whole time how hungry I was. Okay, well I was fine until mile five, when I suddenly was craving a cashew pizza from Neo’s, and no the Cliff GU Alicia had stocked my day pack with was just not good enough.
Yeah, I think she gets tired of listening to me bitch about being hungry every time we run. I can’t help it, I’m always hungry, and I always want a real meal after my run and not trail mix or GU. So besides the fact that I was starving (And yes, I did have breakfast prerun) it was an awesome presnow run, one of our last chances to hit the trails before the snow came falling down.
?

Actually the next morning I did get in a three mile run in the forest behind my house as the storm was suppose to start at four A.M. When I got up, still no snow, so I did get in a short run, before driving in blizzard like conditions to my doctors appointment and back fighting the snow all the way. Then I enjoyed watching the snow flakes falling down from my leather chair, AKA Gambler’s Paradise for hours, yea.? Which brings us to today’s adventure.
Today I tried running in snow shoes. I normally run in some running shoes from Vessi footwear and running in snow shoes wasn’t as easy! Trust me!
It was not a pretty sight. 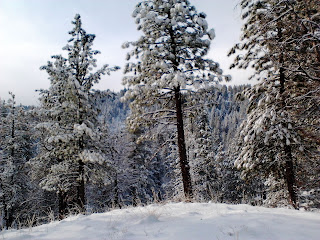 Before I find myself in public embarrassing myself in any way trying to figure out how the hell to actually run in snow shoes, I decided to hike deep into the frozen forest by my house and practice a bit.
I got up at dawn, strapped on the snow shoes and made my way down the frozen streets in my neighborhood. The streets had not been plowed since last nights storm blew through, dropping between three and six inches of snow in some spots. Its weird, yesterday it snowed for about eight hours straight, yet when I walked out with my shovel this morning, I only found three inches of fresh white snow in my driveway. That’s the perfect kind of snow storm, when it snows all day long with minimal shoveling. December snow is nice; just wait until February, when we get two feet of snow in a storm and the piles of snow on both sides of my driveway reach up higher then me! 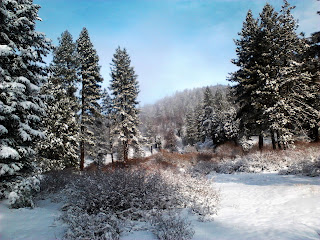 I’m training for a 10 K snow shoe race in February. I was thinking snow shoeing eight miles or so no problem, I can do that easy. Then, I was talking to a friend the other day, who informed me that people run this race, in snow shoes. Running, in snow shoes? Sounds impossible! Sounds like I am going to get hurt! I am so clumsy, running in snow shoes sounds fairly difficult. I need to practice. 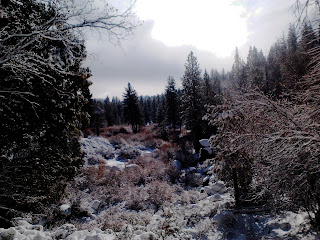 My house is half a block from the forest and its a quick walk through a silent neighborhood this early in the morning that takes me to the dirt roads that lead into the forest. I just ran this same route yesterday and I actually had a really great run. I ran almost four miles, hardly walking at all even on the hard hills. I’m a little bummed its to snowy to run today actually. A little bummed, but snow shoeing in an empty forest is just so beautiful. That and its a nice change to see the snow covering up the burnt forest. The 2007 wild fires burned to within half a mile of my neighborhood. This little hiking area near the creek is full of the carnage that the wild fire left behind. Every time I come back here I see more burnt trees knocked down.
???? 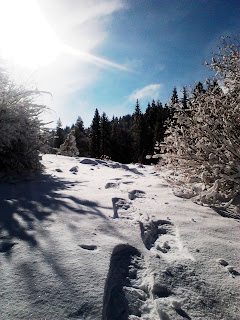 When I was in my early twenties we used to off road in our muddy Ford Bronco’s all the time back here. There was a fence to keep people like us out. It was a wire fence and the trick was that Jenn and I would both stand on ends of the wire’s and Jenn’s brother Michael would drive over the wires. My little brother Sean was best friends with Michael, and we made our brothers move fallen trees out of the road constantly, every time we thought we had come to the end of the line. Technically I think some of this land is owned by the Camp Cedar Crest, a local Christian camp, and I don’t think they are big on locals trespassing on their land, but they’re to nice to really do anything about it.
So for years we spent summer days off roading back on the jeep trails, until finely a metal fence was installed and the off roading good times came to an end. Now I just use these trails for running, hiking and snow shoeing. The main trail I believe will take you all the way to the camp. I snowshoed about five miles round trip yesterday, crossing the creek twice, once going across a slippery log, with snow shoes on, holding onto willow branches to pull myself across and praying I wouldn’t fall into the icy creek. I had to climb over numerous downed trees. Finally about three miles up the dirt road I came across a behemoth of a tree across the road and knew there was no way I was crossing that one in snow shoes. Not today. I’ll have to come back and run this trail another time and see for sure where this road ends up. One things for sure, no cars have been back here in years and years. Just one last point, my friend recently had a pretty major fall accident and decided to file a Slip And Fall Lawsuit to help him while he recovered. He was so glad he did because the lawyer he ended up choosing helped him out so much.

A Summertime Outside in the Eastern Sierra Nevada How I got my Pre Pandemic Covid15 Lbs. Body Back