By Amber Wood on Sunday, March 30, 2014
“I’m going to have to put my pants back on!”
I shout the words behind me into sixty mile an hour winds completely unsure if J heard me or not.
The wind is raging so fast and so hard I might as well be talking to myself, he may be just a few feet behind me on the Devils Back Bone section of the Mt Baldy Trail but the wind is howling so fierce it’s been hard to hear each other speaking as we ascend against the winds up this deserted mountain trail.
Just to be clear, this was not naked hiking.
I had stripped off a few layers of clothing, sweat pants and fleece sweater at eight thousand feet just thirty minutes earlier.
We had both been sick with the flu last week so I had hardly worked out at all in a week and we decided to take the “easy route” up Mt Baldy to the summit today. The easy route is 6.7 miles round trip with three thousand feet altitude gain to the summit, 10,400 feet above Los Angelus.
As we rode the ski lift up to the Notch Restaurant in the Angelus National Forest this morning the icy morning wind froze me to my bones and I just wished for the five minute ride to be over and that was before I noticed my water bottle had leaked all over my pant leg! 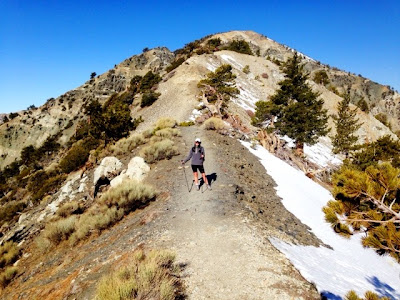 Once we reached the top of the lift, the starting point of our hike at 7,300 feet the wind died down a bit and it felt great in the sun light, probably in the low forties but at least we began the hike in the sunshine. As we began slowly making our way up the barren ski slopes in the direction of The Devils Back Bone and Mt Baldy in the distance I could not believe how quiet the mountain was for a Saturday morning. Sure it is late March but the weather has been great. I thought a lot more people would be doing this hike!
As we slowly hiked our way past fir trees and manzanita bushes the wind began to howl roughly as we approached the edge of the mountain well known to mountaineers near and far as the Devils Back Bone. This is a tiny sliver of land and trail that goes across the spine of the mountain. It is one of the most beautiful sections of trail in Southern California and I would not recommend it if you are afraid of heights. The drop offs are severe and this is at nine thousand feet. 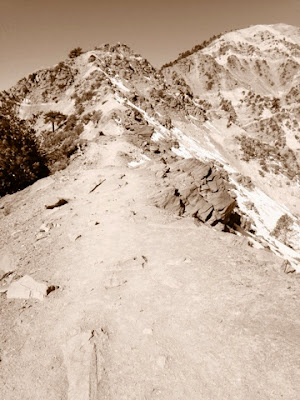 At  this point the wind has picked up and I  was desperately trying to put my sweat pants on over my shorts even as the wind was trying to steal my favorite Mt Whitney I heart switch backs base ball cap off my head. I managed to get my layers back on and shove my hat in my pack before I lost it and than my ears begin to freeze as the wind hit them. The wind chill has to he something like ten degrees.
At last J got tired of hearing me complain about my ears and he let me wear his wind breaker, hood up over my painful ears.
“Were getting to the hard part now!”
I yelled behind me into the wind to J. He is a Mt Baldy virgin and I was trying to warn him the summit was just ahead.
I fought and fought to make my way uphill against the howling March wind; it felt like we were in the Andes and not Southern California!
Now I see why no one does this hike in March!
I looked down at my Merrill hiking boots biting into the sand and it is hard to imagine the girl who tried to run up this mountain two years ago and failed and now I am about to conquer this damn mountain at last, no problem.
Hiking fifteen miles in a day is nothing these days. 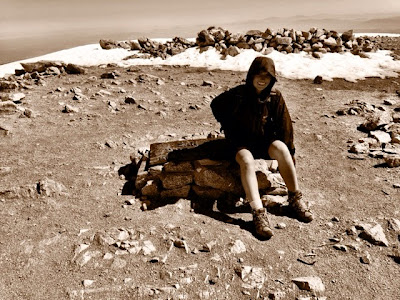 As I approach the summit of Mt Baldy at last, all these years later I feel like a different person. I have new scratches and scars on my knees and arms, many brushes with manzanita bushes. I have torn ligaments in my ankle and still hiked on all summer long. I have hiked through bee stings, thorns under my nails five miles from the car and hoped over more rattle snakes than I can count.
I have bagged peaks and bragged about it to people who don’t care and don’t understand ( and hike in tennis shoes, for gods sake!)
It’s funny how two years ago I thought bagging Mt Baldy would be the greatest thing I have ever done.
These days it’s just a typical morning before work. 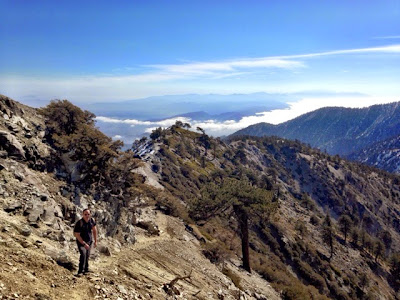