A Wild Life; Growing up in the Mountains in the 80’s

By Amber Wood on Friday, April 25, 2014
It all started with those damn raccoons.
Those damn, cute, adorable I want to hug them except they might be rapid, raccoon. 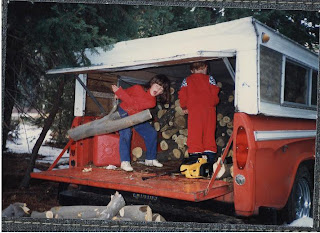 I grew up at nearly seven thousand feet in a small mountain town. I did not have a typical childhood. I never sat in front of the TV watching Rainbow or playing Barbie’s. I helped my Dad and brothers collect fire wood in the forest and spent my free time shoveling snow. Our herd of cats were our toys.

Our household had a raccoon family that lived on our roof. My parents acted like these friendly raccoons were part of the family, our pets really. The raccoon family added to the “charm” of our house. Some times this house reminded me of a haunted mountain mansion. We had an addition put on to this once rustic mountain cabin in the eighties and the addition was never quite complete and on top of that the most random things would happen. My uncle started putting in central heating in the beginning of the nineties; than he moved to . That was never finished, and so our house remained freezing unless you were directly in front of one of the fires. If you grew up with central heating, then you don’t know how lucky you are. There was no Heating service in Durham for us! Logs upon logs upon logs trying to maintain fires was how we kept warm. Then, not only was our house cold, but the unfinished central heating ducts became infested with the raccoon family. Sadly, back then you couldn’t just search replacement boilers Roanoke on Google.
Besides the great raccoon infestation of 1991 the house had some additional problems. There were left over holes in the flooring from the never finished central heating project. We had a massive black antique telephone in the kitchen that would ring so loud, it felt like you could hear it all through the neighborhood. It was so Little House on the Prairie. The only problem was, there was a huge hole in the floor right below the phone that was covered with cardboard duct taped down (So the raccoons wouldn’t get in the kitchen) When you answered the phone, you had to try and not fall into the basement.
Our family kind of made this raccoon situation worse. It began with the cute raccoon mamas and babies living on the roof, but they were just so damn cute so we would feed them late at night. I remember being about twelve years old; my Dad would wake me up at midnight
“Amber” He would whisper in my sleeping ears
“The raccoon family is here. Do you want to feed them?” I would bound out of bed in My Little Pony pajamas because I thought they would give me some extra cute points, and I would hand feed the raccoons raw eggs. Okay looking back it seems not too smart at all to let your children hand raw eggs to potentially rabid raccoons, but this was the late eighties and there were few seat belt laws and my Mom let us eat raw cookie dough straight from the bowl. It was a simpler time period.
Salmonella? Were not scared of Salmonella and catching rabies from the happy go lucky raccoons! So the raccoons began to think they were part of our family of two parents, three children and about eight cats. The raccoons had moved in. They had moved in to the unfinished heating ducts. 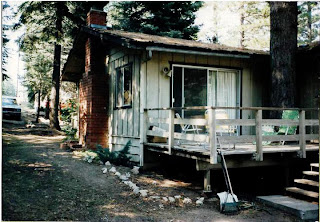 After 1991 we really couldn’t go in the basement any more; that was the raccoon’s territory now. No joke, they would hiss at you. It was scary, dark; cob webs every where, like walking onto the set of a horror film. We were all grown up now; we knew those fuckers could have rabies! Okay our family had brought this on ourselves. We had treated these wild animals like pets and now they owned the place. Yes the Woodyard family and our herd of cats were living in the raccoon’s territory now.

The raccoon harem in the basement wasn’t the only problem with the Pine house. The plumbing backed up on a regular base and we would have to get on the roof, run a house through the kitchen window and plunge the whole thing out some how. I really don’t recall how this worked. I was about twelve when I started crawling up the roof with my father. Oh the eighties and early nineties when it seemed children were invincible and you could leave them in the cars for hours alone while you shopped at Home Depot. Not to mention car seats? I do not ever remember even sitting in a car seat when I was a kid. I do remember being strapped in the front seat of my Dad’s tiny Honda Civic with my brother, both of us in the same seat wearing one seat belt, as I think we had been out all day collecting fire wood and the hatch back and backseat were full of it.
I think about the childhood that I lived through and I am so blessed to have grown up in these mountains living the life I did.
Also I’m very lucky I survived to write about it.

Linking up again this week with the yeah write.me moonshine grid