By Amber Wood on Wednesday, June 4, 2014
Every time I almost swallow a bug I remember that it’s spring time.
Every time I leave the house at seven a.m. for a five mile run in the hot, hot May sun I almost always forget my mosquito net for my face. I than spend most of my sweaty, miserable hike/ run up hill swatting at the terrible little nats and flies and mosquito things as I battle my way up hill after hill.
Today’s hike was exciting (terrifying?) as the trail was covered in poo.
Scat that is.
A ton of fresh wet scat and I was tempted to turn around when I noticed the scat was super fresh. ( as in hours old) I was however, closer to the paved road at the top of the trail and I was hoping ( praying?) the bugs would be less severe on the paved road.
So I kept going at a steady climb up the bug infested trail using my hat to fan by face and keep the biting creatures off of me and scanning the forest for the bear that I was sure was around every corner.
It never appeared, thank god and five miles later I feel like I sweated out all the nasty Jack Daniels I drank yesterday while boating the slimy waters of Lake Perris.
There are a lot of awesome places; trails, lakes, mountains, in Southern California. 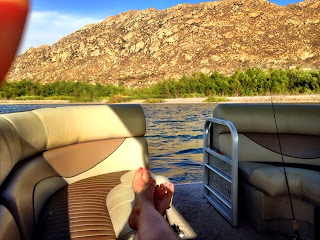 Lake Perris is not one of them.
After a sweaty day on the trail coming home to some tasty eggplant taco treats is a great mid afternoon snack. 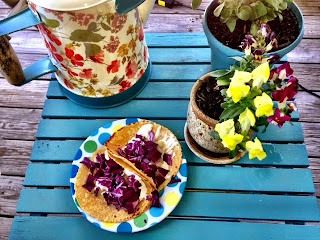 Poke holes in the eggplant and roast it on your bbq until it is chard on all sides.
Let the eggplant rest for at least thirty minutes.
In a bowl mix the tahini, Greek yogurt, lime juice and the parsley.
On the stove top heat a frying pan. Brush a little coconut oil on each tortilla with a pastry brush and fry on both sides.
Assemble the tacos by adding the tahini sauce to the taco shells.
Cut the eggplant in half and scoop out the middle and put it in the tacos and serve with cabbage.