Bob Cat! Bob Cat! And a Recipe for Pork Free Biscuits and Gravy

By Amber Wood on Saturday, August 10, 2013
Disclaimer..
The biscuits and Gravy have nothing to do with the Bob Cat I saw on my 4.5 mile run today.
Lets just make that clear. Bob cats are for admiring as they scamper up the trail,m never for tasting.
Today was a glorious day.
Today was day two of live my life like every day is a vacation.
From the gourmet breakfast I cooked this morning to the hours I spent fishing creek side, I think I succeeded.
I worked an eight hour shift this morning starting at six a.m. At seven a.m. my boss decided we were way ahead of our morning goal and I should there fore make breakfast for our crew if twenty employees.
I chose Biscuits and Gravy, made with chicken sausage for my friends who don’t eat pork, and I made a has brown egg casserole on the side for the vegetarians.
I fed all these employees for twenty dollars and that included one carton of orange juice. Wow, impressive even for myself.
My day at work was going to get even better. At noon the brand new Coconut IPA Stone Brewery beer that I had eagerly been anticipating trying showed up and my boss insisted we try it. Each store in our region is only getting two cases of this special reserve beer that was supposed to show up tomorrow, my day off. I had instructed some co workers to save me a bottle and crossed my fingers, hoping that would happen. So when the beer showed up early, I was thrilled.
Unfortunately though, when we tried the Coconut IPA, I did not like it at all. It had no coconut flavour and was really bitter. So I guess I saved seven dollars for a bottle of beer. So theres that.
It was okay that the beer sucked though as shortly after that I was off work for the day and on my way back to the mountains and ready to fish!
I made my way down the winding canyon to Seven Oaks and in forty five minutes I caught eight fish!
Except for yesterday, this was my best day of fishing ever! 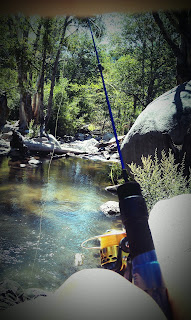 I have a highly addictive personality and it is official, I am addicted to fishing. I’m going again with friends tomorrow before work.
After catching the eighth fish, I did switch fishing holes, trying a few other spots along the creek and exploring some back dirt roads I had never seen before.
Unfortunately there seemed to not be any other fish at any of the other spots I tried and I pretty much got skunked for the rest of the day.
So I gave up on the fishing about six P.M. and went for a run up Onxy Summit way. I was running a section of the PCT (Pacific Crest Trail) I had never run before.
The whole run was up hill and I was getting tired at this point. Honestly about a mile up the hill I was almost ready to give up and turn around…
Than I came around a corner…
Bob cat! In the middle of the trail! He took one look at me and took right off up through the cactus and bucks brush on the hillside.
That is the first time I have ever seen a bob cat while running. I’ve seen a few every now and again from the car but seeing one on the trail with me was awesome! After that I was reinvigorated and managed to run almost five miles total!
Which is good because I ate way to much of these delicious Pork Free Biscuits and Gravy this A.M.

Cook the biscuits in the oven.
Slice the sausage into chunks. Cook the sausage in a sauce pan with the shallots. Add the garlic and the thyme. When the sausage is cooked thoroughly add the butter, garlic salt and the maple syrup. Sprinkle the flour over the top and stir in completely . Let this cook for about one minute, stirring the whole time. Stir in the milk and keep stirring until the sauce begins to thicken and just barely begins to boil.
Serve with the biscuits.