Welcome back to Cougar Crest

You know what pisses me off almost as much as rattle snakes?
People who put fake plastic snakes in the middle of trails.
Not funny.
Not funny even if your a twelve year old boy.
No one will be laughing when I almost have a heart attack jumping over a fake plastic snake on Cougar Crest Trail Head. There weren’t even any cougars (the type you’d find on www Nu Bay com to alleviate my stress).
I wish I knew who left the fake snake on the trail; I would kick them in the neck.
That be said, it was a glorious evening for a run, on a mountain trail spattered with hikers who could not keep up with me, and I was jogging!
Damn, that made me feel pretty damn good about myself.
What did not make me feel good?
Almost shitting myself two miles from the nearest porta potty when some idiot left a plastic snake toy in the middle of the trail.
I run to get my heart rate up, but it doesn’t really need to race like this. This can’t be healthy.
This blog post is not suppose to read as a book report, but I’m reading Wild, by Cheryl Strayed right now.
So far, not so impressed.
This book is really depressing.  The girl in the book comes from a majorly poor family in Minnesota. Her mother is diagnosed with lung cancer and dies forty five days later. Cheryl is fucked up after this. So to heal herself she decides to hike the entire Pacific Crest Trail from Mojave to Canada. She has barely been a hiker before and is not in shape at all.
It’s a good premise for a book, but the book is just so sad and she doesn’t even write about great adventures, how beautiful it is, the stunning scenery or the fun of hiking and camping. She writes like this is hell she is going through, how she wants to quit every moment and makes it seem like hiking is a night mare.
This book has encouraged me to write my book to show how fun and amazing running and hiking is. I would really like to inspire people to change their lives and live healthier, and have as much fun as I am doing it.
This depressing book also inspired me to part of the Pacific Crest Trail today. 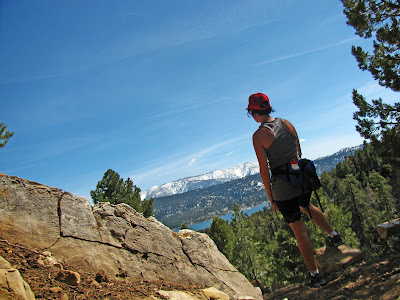 The Pacific Crest Trail runs all through our mountains. I’d like to get to know most of it by heart in the coming years. So many people start out in the spring every year and hike the trail from the Mexico Border to Canada. I really have no desire to do that, because well, it requires living your life like a hippie hobo for three months, never showering or shaving ones legs. I might be the worlds biggest tom boy, but even when back packing, I need to make myself a little less stinky and lady like every few days.

I just ordered about six different book on people who took months to hike the PCT from start to finish from Amazon and these are really helping me get inspired to write. 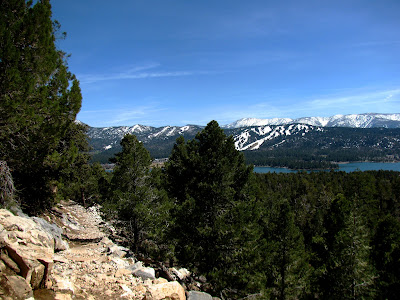 To catch this portion of the Pacific Crest Trail, you run up the Cougar Crest Trail head from near Big Bear Lake. It’s about two miles to where the PCT starts. It was a glorious run through a forest that was just starting to smell like spring time.
I saw no animals, but almost stepped in deer poo.
It was defiantly still winter up in Big Bear Lake. At the lower elevations the Scotch Brush and Corn Flowers are in bloom near all the trails, a mix of yellows sprouting out of the sand. Up at over 6,000 feet, where I began my run it is still winter time although the snow was melting fast. All the oak trees were still bare and dormant and there were no wild flowers to be seen yet. Big Bear knows we might still get some snow in the coming weeks.
I ran to the top of Cougar Crest, so proud of myself with every hiker that I passed. After being sick for so long, this is not even one hundred percent back in shape for me and I was passing hikers who were exhausted, resting in the shade!
Once I got to the top of Cougar Crest the trail crosses the PCT. One side goes off towards Green Valley Lake. I hiked a little bit of that last summer.
I followed the edge of the trail that went East around that shore of the lake. This part of the trail hugs a rocky bluff with an absolute gorgeous view, maybe eight hundred feet up over the lake. I couldn’t run up here; the trail was to rocky. So I just slowed down and hiked it, enjoying the view so far below me.
I had to turn back almost three miles into my run/hike. I was running out of time, meeting a friend in the evening. It was an easy run back to my car. As I drove the windy mountain roads home through Fawn Skin on Big Bear Lake’s North shore, I noticed one of my favorite trails, Grey’s Peak was still closed. Than I saw that all over the hills were signs saying Area closed, eagle habitat.
Now, I know that Bald Eagles always migrate to Grey’s Peak in the spring time. I actually saw quite a few soaring over Big Bear last summer. I have never seen this area closed signs before. After talking to a friend, I heard some great news. A baby eaglet had been born at Grey’s Peak! That is why the area is closed. I guess baby bald eagles are quite a rarity.
All in all it was a fantastic April afternoon run at Big Bear. It was so warm by the time I finished up at four thirty, it had to be almost seventy still, I was tempted to jump in the lake!
Cougar Crest fake plastic rattle snakes
1
Previous Post
Next Post