My first morning in Venice I woke up early just after sunrise.
I was sharing a room with Dawn and Jess. I had holidayed with Dawn before and we got along really well. Jess and I had just met and she seemed nice too. (I might come to regret these words later in the trip)

I tried to be as quiet as possible as I left my sleeping roommates behind and stepped out into the sleeping city of Venice, Italy.
With all these early morning hours in front of me, by myself on the streets of an awakening Italian city, I stopped in a pasticcerias to grab an espresso and a fritelle, a  doughnut sprinkled with sugar, raisins and filled with zabaglione, and walked past the Church of St Mark, the early morning light glinting off the gold paintings on the front of the Basilica. I strolled down to the docks sipping on my strong Italian coffee.

I’m so lucky, all the places I’ve traveled in Europe have the best coffee, well besides the U.K. of course.
Who likes instant?
Bleh!
I took a seat on the steps near the Doge Palace to watch the ocean in the morning light. It was a perfect morning to just sit and enjoy Venice in the crisp winter morning right after sunrise.
That was a moment I will always remember, sunrise in Venice. In two days it would be Ash Wednesday and Carnevale would officially start.
Carnevale runs two weeks through Fat Tuesday, and for those two weeks these now empty streets would be absolutely packed with tourists. I’m so glad we chose to visit Venice a few days before Carnevale so we could see what the city is really like, without the tourists crawling all over it like drunk ants in fancy masks.

As I watched the morning sun rising higher over the ocean, I felt completely relaxed, and a little sorry for my traveling companions who were still asleep in their warm beds!  I sipped my coffee, and enjoyed one of the best pastries I’ve ever had.

A vacation in Venice forces you to be laid back and take it easy. There are no cars or highways in Venice. You walk everywhere, strolling down the narrow calli’s (Alleyways) crossing bridges over the tranquil waters of dozens of canals. It seems like it would be easy to get lost in the maze of Calli’s and canals, but Venice is pretty compact, and I was always able to make my way back to St Mark’s Square pretty easily. Getting lost in Venice is an excellent way to spend an afternoon or an early morning. I loved wandering up and down the little streets, stopping at the little bakeries to grab a gooey snack.
Later on in our tip, one of the afternoons we were in Venice most everyone took a gondola ride, but I chose to not go, and just wandered Venice by myself for the afternoon, snapping pictures of the buildings at a leisurely pace. 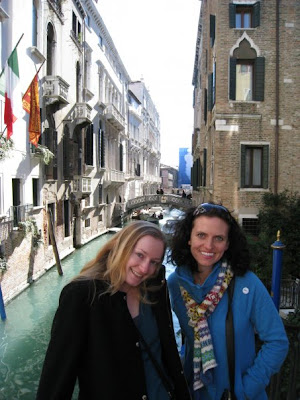 Our holiday in Venice may have been pretty short, just a few days but this was one of the most fun trips I had while in Europe in my twenties. I think a lot of that most have been the amazing food of course, and this comes from someone who says she hates Italian food! Part of that reasoning though is this was the first trip I had ever taken when I di things by myself and left the group behind. This trip would make me into the confident female solo traveler I am today.
But first breakfast!
Our hotel included breakfast, and they had muesli which I love!
Why is it so hard to find in the States? They have it everywhere in Europe? Plus we got all the cappuccino we wanted included! I had like three every morning with breakfast, maybe that why I enjoyed Venice so much?
I was SO awake!
Our first full day in Venice we went on a walking tour exploring this great city. We wandered all over the place. My favorite area of Venice is the view you get by the docks; you can see the Alps in the background, far away across the ocean. It is one of the most beautiful things I have ever seen in my life. I could stare at that view forever!  When we wandered back towards our hotel we stopped at a tiny sandwich stand and enjoyed some delicious street snacks, and house wine. As we sat in the afternoon light eating nicoise sandwiches on artisan bread and sipping on red wine, I thought, this is the life. This vacation was truly so relaxing! Of course this was before the drama, but I’ll get to that.

After lunch we wandered over to the hotel where the masquerade ball was to be held to buy our tickets. The manager of the hotel actually met with us himself, pried us with cappuccinos and gave us an unbelievable rate on the ball. He gave us a group discount, yea! Full of caffeine,  we wandered over to the world famous Harry’s Bar, to have a few Bellini’s, something you have to drink when you come to Venice. Henry’s Bar was made famous by celebrities visiting Venice in the past. The drinks are super expensive; it’s a pretty fancy bar. I just ordered a cappuccino. Because obviously I had not had enough coffee at this point.

Also, Bellini’s are to sweet for me.

That night we made our way through the streets of Venice stopping at all the little bars to try out cichetti, little tapas like appetizers that every bar has in glass cases. We drank glass after glass of sparkly prosecco to wash down the briny marinated squid antipasti’s, marinated aborigines, different cheeses and all kinds of amazing appetizers we could never find at home. These tapas were so good! I was kind of sad we couldn’t do this again the next night, but that was the night of the ball. We ended the night by finding a bar that had a wine tasting for a very reasonable price. We sat outside at a table in the moonlight by a canal and tried five or six different Italian wines, all so great!

Our second morning in Venice, in the sunny yet chilly Venice morning we met in the lobby for a quick breakfast before catching a vaporetti, or water bus, to the island of Murano. Murano is a small island just off the coast of Venice; they are famous for their stunning glass. We watched a glass blowing demonstration, and then shopped in the tiny stores, before what else? No, not more coffee, but gelato on the way back. We had to head back at a decent time to prepare for the ball.
Our last night out in Venice would turn out to be truely amazing. The story of the ball though is a WHOLE different story.
The next morning would be our last in Venice and I had to do two things that last morning in Venice;
behave like a local, followed by,
do something only a trashy American would do.
This was the first day of Carnevale.
When we hit the streets and the calli’s we could already see a difference. The streets were absolutely packed with people!
We had waited until today to go into St Mark’s Church, which might have been a mistake, as the line was really long. We had wanted to go to the top of the clock tower also, but the line was just way to long to do both. The best part of St Mark’s Church was the view over the whole square at the top. All week long there had been construction happening in the middle of the square, some kind of stage being built. It was almost finished and there were people absolutely everywhere.
People were in costumes, selling masks, street performers were working their magic, children were throwing confetti. It was pure madness as we gazed down from the roof of the church, but I’m glad we got to see a little bit of the carnival madness. Before we left I took a bunch of pictures of myself grabbing the balls on the horse statues up on the roof, which was really funny because after I did it, all these guys stole my idea and started doing it to! And that is how I forever left my mark on Italy!
I was the American grabbing the balls.
After I stopped acting like a fourteen year old boy, we wandered back in the direction of the little shops and the Rialto Bridge.
All that ball grabbing had left me starving! We found this little buffet restaurant that was ala carte and we had lunch there. It was so cheap and absolutely delicious! It was our last meal in Venice, and it was incredible!
We split up after lunch to do some shopping and Mimi and John went to the Doges Palace. I was over standing in line for tourist sites so I bought some candy and some really cute leggings. When I got back to the States I realized I had been shopping in a children’s shop. I couldn’t read the sizes because they were in Italian. Suffice to say my Italian fashionables do not fit me. I also bought some cute Italian sunglasses, that broke on the way back. Boo. When we met up, we girls decided to get our faces painted, then we grabbed one last gelato, and it was time to check out of the hotel and say chow to Venice!
First we had to make our way through mobs of people packed together in the Carnevale clogged streets, all while lugging suitcases. I didn’t feel like the shy American I had been four days ago. Like a rude, hurried Italian bella I forced my way through the crowds bellowing “Scusi! Scusi!” at the top of my lungs. All these tourists who had just arrived jumped out of our way. It was such an advantage to know how to act like a local!
Grabbing Balls Local Venice Venice
0
Previous Post
Next Post

How to not travel like a ‘Merican. Let’s Make Overseas Travel Classy Again!