There is a perfect place to spend a glorious spring day. Santa Anita Park beckons me every spring with the sound of hoof beats and the colors of the sprightly jockey’s rainbow silks. In March or April, you can find me leaning against the white railing at the track cheering on limber thoroughbred race horses as they leap for the wire, all hard muscles and ligaments. The little guys on their backs cheer them on with a whisper in furry ears. Whether I’ve just hit a two under dollar trifecta or I’m tearing up yet another losing ticket, a day in the sunshine at Santa Anita, San Gabriel Mountains green and so lush in the distance, is a phenomenal day. 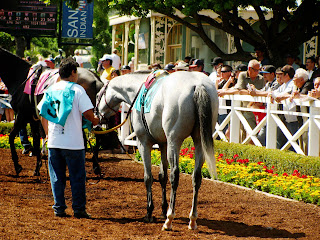 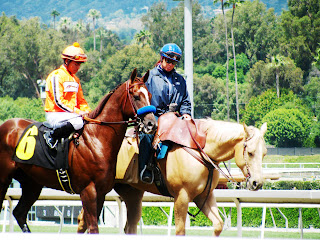 I worked briefly at Santa Anita in 2001. I got up early one spring morning, living in suburban Redlands at the time, and I drove the hour commute to Santa Anita Race Track.  I stood at that same white rail that the great Sea Biscuit, Swaps and Zenyatta had breezed by many a early spring morning and looked out at the sandy track beyond and the horses warming up in the crisp morning light. As the sun began to rise over the tops of Mt Wilson in the distance, I made my way into the maze of stables that make up the back side of the racetrack for the first time in the early morning light. The smell of millions of dollars of horse flesh was in the morning air.  This was (Bling bling) Southern California, no bush track. This was where sheiks and pop singer’s sent their prize Thoroughbreds to be trained by the best in the horse racing business. This was the track gourmet chef Bobby Flay frequented in the early morning light, as his million dollar champions in training first began to gallop over the sand.  I made my way to any random stable that was hiring. Little did I know when I started hot walking horses for trainer John Sheriffs that chilly morning that in less then ten years he would go from being an unknown to training the most popular race horse since Secretariot.
In 2009 until 2010 John Sheriffs would go on to train Zenyatta, a spectacular race horse. This mare would go on to win twenty something straight races before losing by a nose in horse racing’s premier race, the Breeder’s Cup Classic. This is a race that no female horse had ever won before until 2009 when Zenyatta won it with her definitive style of closing from the very back of the pack to win at the very last moment. Watching her race (Which I did, live, about six times) was unbelievable. By the time she hit the wire, first every time, you couldn’t even hear the track announcer, the crowd was so thunderous loud, cheering her on.  It was the most amazing streak in all of horse racing. She was the most phenomenal horse that sport had seen since a Triple Crown winner twenty something years ago. When we would drive three hours from our mountain home to see Zenyatta run, the track would be absolutely packed with racing fans. You couldn’t even move, the fans turned out in droves to see a brilliant mare run her heart out in a sport that had almost been forgotten. 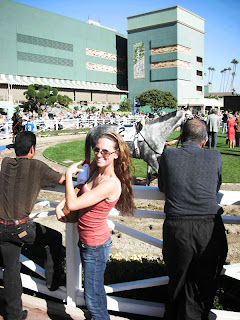 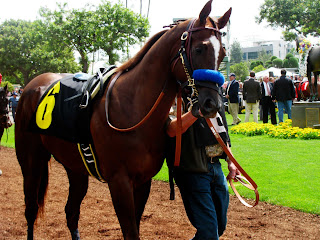 I only worked at the John Sherrif’s barn a week. I don’t think I ever even met John Sheriff’s in person. I only talked to his assistant. Every day I regret leaving that job, it was a hard decision. This was what I had always wanted to do with my life. When I was a little kid, instead of wanting to be a teacher or a doctor like my peers, I always said I wanted to train race horses. Now this was really my dream job, working in any way  with race horses. Now here I was, having a job hot walking horses, literally at the very bottom of the food chain; it was tough. I was making eleven dollars an hour and would be for a very long time to come. I was the only hot walker who spoke any English. I had almost no expedience with horses. These horses were huge and bully’s. I was 100 pounds a pushover and they knew it. The gutsy stallions were walking all over me, trying to  rip my arms out of the sockets it seemed while I was trying  to control them. I started to think to myself after just a few days, why am I doing this? I’d gotten a job an hour from my home with a trainer who wasn’t well known. The kicker was what got to me as I was spending twelve hours a day at the track.

If I worked in the Thoroughbred industry it would be my life. Good bye friends, good bye family. Your at the track from 4a.m. until three or four, horses are your life and there are no days off. Did I want to do this for ever and not make good money for a long time, if ever? I regret quitting even today. I love horse racing with a passion that I don’t love my job now. People ask me why I don’t go into management, because this? Is just a job, not a career. Not for me. Horse racing is were my heart lies. Not with cooking, defiantly not in the grocery business.
So I guess I’ll just be a fan for now. Watch TVG when I work out, make my way to Santa Anita for the big races, and take pictures of John Sheriff’s champions from outside the paddock railings.
glorious spring day rainbow silks Santa Anita Santa Anita Park Santa Anita Race Track
0
Previous Post
Next Post