The Fires, or the worst day of my life

By Amber Woodyard on Monday, January 31, 2011
The day I was evacuated from my home I drove down highway 18 with my radio off. I never drove without Shakira, Gretchen Wilson or the Cure blaring from my speakers. I had just packed up my two long haired cats, 15 scrapbooks of pictures and my oh-so-so-cal True Religion jeans, piled it all into my Baja truck and gave my 3 story house in ArrowBear a quick look goodbye. Angry clouds of red smoke billowed up behind my back yard. It looked like the end of the world. It was almost the end of my world. 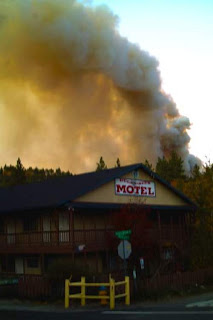