The Day San G made me her Bitch

By Amber Wood on Monday, April 14, 2014
“Be careful, it’s icy”
The words had barely left Trav’s mouth and I’d already lost balance on the slippery icy ledge.
I was sliding down the icy mountain fast and my calves, in short yoga pants burned as they scraped down the left hands side of my body.
I felt like I was leaving a trail of blood on the sharp snow as my left hand fought to try to get a grip of something, anything.
It felt like I was sliding down a sheet of painful glass and I could hear Trav gasping on the mountain above me, shocked I had fallen down the ravine. ( I honestly wasn’t panicked like he was, I saw the prickly manzanita bush twenty feet below where I had fallen from; I knew it’s rust colored limbs and pink berries would stop my slide down wards at some point.)
It felt like I slid down the ravine for ten minutes and it was actually mere seconds
Later Trav would quote such things on FB as
Snowy spring time trails. I witnessed a good friend slide down a ravine out of control with complete calmness and stop herself from becoming seriously injured or dead. One of the sketchiest moments in my hiking experiences. 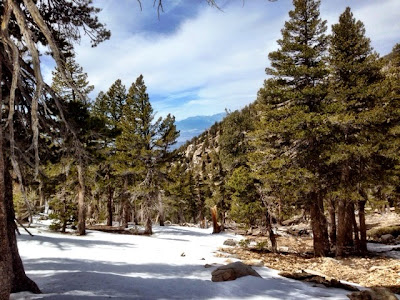 Honestly I have taken good falls hiking before and I will again, it’s just something that comes with hiking. I feel like a expert at falling at this point and I just knew not to panic.
It sounds logical and came in handy thirty seconds later when I came to rest next to the manzanita patch.
First reaction would be oh shit did that just happen and above me I hear Trav asking oh my god are you alright. 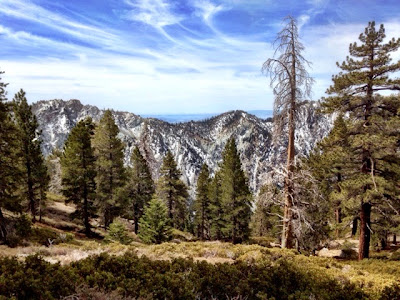 He went from taking a scenic picture of me on a snowy trail to thinking damn this hike is over and I am carrying my friend out six miles back to the car!
Before I could tell him I was okay, Rosco his incredibly happy go lucky dog came sliding down the same path I had just fallen down in terror.
Only Rosco did it sliding down the mountain on his butt, front paws raised with this huge doggie grin on his face!
It was like something out of a cartoon!
I couldn’t help but laugh at the little white dog even as I was hobbling to my feet, checking out the damage, grasping my battered left hand ( wondering if it was broken?) 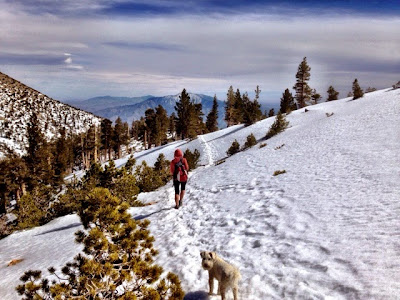 It hurt so badly at the moment as I slowly made my way back up the mountain side to Trav.
My calves were bleeding and my left hand was aching really bad and at that moment I was so tempted to turn around and once again not summit San Gorgonio but a little voice in side told me to keep going…