The Best Fish Curry with Tamarind and Coconut Milk Those are the magical words anyone in the fishing community loves to hear. When I really started to get into fishing ten years ago I actually thought my friend John coined this term himself and it wasn’t until a few years ago when I met my boyfriend on a fishing trip and then promptly stole his heart and all the giant trout in Big Bear Lake, that I realized “Fish on” is something everyone in the fishing community says when they have a fish caught on the line.

It’s a term I have not heard in a long, long time. Not surely at one of fifteen or so different lakes we fished at in the last month in the eastern Sierras of California. Here in California, we had a magical snowy winter and believe it or not, Mt Whitney, Banner Peak, the Mammoth Minarets and basically most of the over 10,000-foot passes of the eastern Sierras are still covered in the fluffy, now frozen white stuff. Which is fantastic for taking photos but not so great for anglers. The snow is melting off fast from the mountains west of Lone Pine to high above Barney Lake near Bridgeport. All that means that fishing the lakes of the eastern Sierras is crap right now as the water is way too cold for hungry fishies and the water is running way to fast from the snow melt off. (As in creek crossings are now rivers link Dorothy) In our month of treks around the eastern Sierras not only did we shore fish everywhere from Grant’s Lake to Scorcher Lake, to Lake George  (And many more) but we also kayaked and trolled through the above lakes as well as Lake Mary and Silver Lake. We also tried hiking into Skelton Lake for some off the beaten path fishing and everywhere we went the story was the same; No fish. Skunked. Even the fly fishermen were not catching hardly anything. We tried worms, we tried lures, we tried power bait of every stinky garlicy overpowering favor. The fish were simply not biting. Meanwhile at home, in our own alpine hamlet, three hundred miles south and up to a whole different mountain range, rumor had it the fish were biting like crazy! After a month of fishing the shores and the high seas of nearly every lake in the Mammoth Lakes region, we drove back from vacation a day early to try our hand at fishing on Big Bear Lake.

And I caught this guy on our first cast. Music to my ears as the bald eagles soared above our boat, glaring down at my catch of this giant…. Carp. Yes, the majestic trash fish of the Big Bear high seas.

Unless, that is if you are of Asian or Indian decent! My boyfriend looked at my prize fish in wonder and told me I had just snagged “The salmon of India” After descaling and filleting this guy, we did see that he had pretty pink flesh just like a salmon, so we decided to soak him in milk, add some turmeric and submit him to our favorite fish curry. I personally found eating carp just to difficult; There are just so many tiny bones. Sometimes I get over eating crab legs because it’s just to much damn work! And I felt the same with picking all the bones out of this beautiful fish. 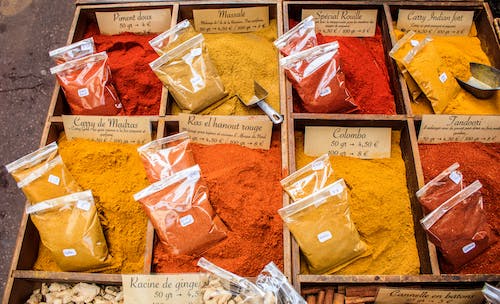 But this right here is the best fish curry you will ever have in your life. You can use basically your favorite fish although I prefer it with swordfish or bass. Do you happen to be a vegetarian? This curry-based sauce is fantastic over yams as well! Just omit the fish! Like we would have done if we were skunked again!

The Best Fish Curry with Tamarind and Coconut Milk Add the fish after ten minutes of cooking the gravy. Pour in the coconut milk, tomato paste and the tamarind. Allow cooking another ten minutes until the fish is cooked.

This is great with just a sprinkle of fresh cilantro.

Love this spicy recipe? Don’t forget to pin it!

The best, and easiest Grilled Trout Ever