The Adventures of Creek Girl

The creek in summer is my sanctuary. There are a million places to hike down to Deep Creek between Big Bear and Hesperia in the high desert. I’ve hiked a good amount of them. When I was a kid we would hike through the Boy Scout Preserve by our house on Pinehurst. The street nearby is called Wilderness, very fitting. The trail winds its way through a pine forest also studded with oak trees and ferns growing wild; and poison oak grows wild everywhere of course. The creek is only about three feet deep here, but it’s deep enough still to cool off in the hot summertime months. We would spend our summers splashing around and trying to catch the little creek trout. Its maybe only a three mile hike down to the creek by my old house in Upper Rowco but coming back we always took a short cut, it takes us straight up hill, and it’s very, very hard. I started doing this hike with my neighborhood friends when I was about 12 years old. I haven’t been back to that area of the creek in about ten years; I heard it all burned in the last fire, so sad.
ï»¿ï»¿

ï»¿ï»¿      When I was in high school we started off roading down Hook Creek Road to Deep Creek. At the time you could drive across the creek at the Deep Creek crossing, if your truck had the clearance for it. The trail winded on uphill to the waterfall, the hardest four wheel trail in our local mountains. I destroyed my Bronco off road here one summer afternoon. I took a full size Bronco up the hardest jeep trail in the San Bernardino Mountains. I did make it out, even if I was towed out by a jeep after I took out both hubs, leaving me four wheel drive-less and with some very burst tires. I decided I needed something a little more suited to off-roading, so after finding some atv tires for sale I was soon back on (or off I guess) the road. 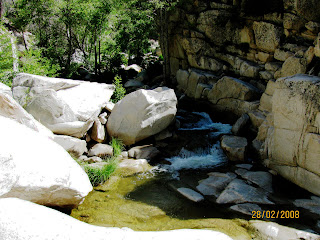 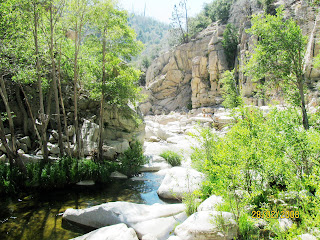 After I wrecked the Bronco we decided swimming and fishing at the creek was a way cheaper past time. Well, okay, actually two Bronco’s later… We moved on to fishing, floating and drinking margaritas. We would pack inner tubes, frozen margaritas, canned beer (No glass at the creek) collapse able fishing poles, and snacks into our backpacks.  At this point a bridge had been built over the creek crossing, so we would park at the bridge and hike upstream from there. We would climb and crawl over the boulders, pulling ourselves up the mountain by the roots of trees, sometimes wadding across the creek in freezing March snow run off. By the time we crossed the creek in the early spring our feet would be numb and aching from the freezing cold water. 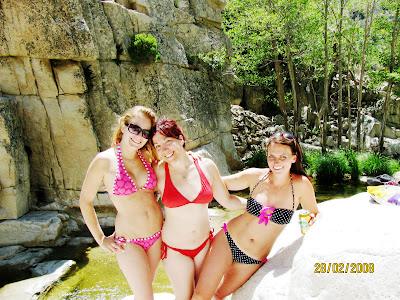 Our aching bones and wet soggy clothes were worth it once we made it all the way to Three Ponds, our fishing hole a mile up the creek. The water was seven feet deep in spots. There were huge boulders to rest on, or cast off of. The fish were good size for creek trout. We rarely saw people back at this fishing hole. A few ponds closer to the trail head was a big pond with cliffs to jump off of. Most of the party animals, Red Neck Yacht Club, as we called them, would hang out here, drinking Bud light, smoking pot, leaving their trash and old socks behind for people like us to pick up when we hiked out.  Three Ponds was our go to spot at the creek for years. Except for the occasional nudist, it was such a peaceful and secluded place to hang out, fish or float on a hot summer day. About July first it was actually warm enough to swim in the creek. 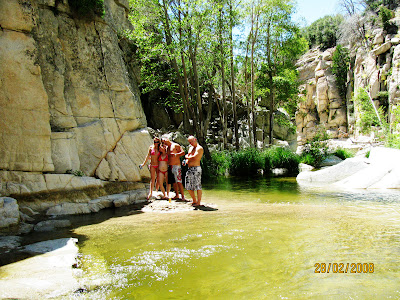 Sometimes we would follow the Splinters Cabin trail head. It follows the Pacific Crest for a few miles, before you come to a bridge and PCT branches off towards Big Bear. If you stay on the left bank of the creek the trail follows above a canyon with the creek down below. There are multiple little swimming holes down steep paths if you feel like braving them. The big highlight is Aztec Falls. On weekends it’s insane there. So many drunken rednecks, covered in tattoos and piercings, chugging bud light and falling down drunk in the creek, kind of like the circus came to town in the mountains. Aztec Falls is cool because there is a forty foot jump to the pool below. Unfortunately there is also a lot of broken glass. The party crowd brings glass bottles in, and the rangers can’t be everywhere at once to enforce the rules. Sometimes we go to Aztec Falls during the week when it’s quieter. People who have never been to the creek before like it because you can jump, but you can’t fish there. Fish don’t like to party.
Last spring Alicia took me to my new favorite creek spot. We set off one morning for a “short hike” before work, Famous last words with Alicia around.  We took the Crab Flats dirt road cutting through what was majestic forest until it burned a few years ago.  Its about a five mile off road adventure along Crab Flats road, at one point you have to ford Crab Creek in your SUV or truck. Don’t try it in any kind of low clearance vehicle. You will flood your engine, I know. 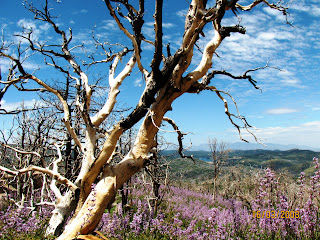 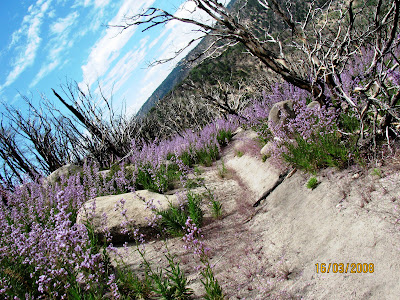 When I was 18 Jen and I decided to go offroading at Crab Flats one hot summer day. When we crossed Crab Creek, my engine was instantly flooded in my little Dodge truck, Emmylou. Jen and I had to walk miles back up a hot and dusty road to seek help. Not only that, but Jenn had been fasting, because she was a good Mormon Girl, back in the day, and she had a job interview at Raspberries Bakery in Lake Arrowhead later that afternoon. Luckily, she had a Mormon friend from church that lived nearby in Green Valley Lake. They drove us back to Jen’s mom’s house in Springs, where we stole The Beast (The beloved family Bronco) attempted to tow my truck out, f’ed up the back end of The Beast in the towing, blamed the damage on Jen’s sister, and Jen still made it to her job interview in time, and got the job! Yea! So many free lattes and Cinnamon muffins for us in the future! It was one of many offroading adventures Jen and I enjoyed together throughout the years.

Alicia and I parked at the Crab Creek trail head and headed towards Fisherman’s Camp, down a long dusty dirt trail. Around the first two turns you get a beautiful view of Lake Arrowhead across the mountains. This is an awesome hike on a clear early spring day. There are gorgeous purple flowers dotting both sides of the path. Around May they are in full bloom. I call them Skunk Flowers because they are really pretty, but stinky. We followed the switch backs, down, down, down into the valley. A mile in, we saw a rattlesnake on the path; the first one I saw last year. After he finally made his way off the trail into the stinky bushes we continued down to the creek crossing, over a trail dotted with yellow wildflowers. 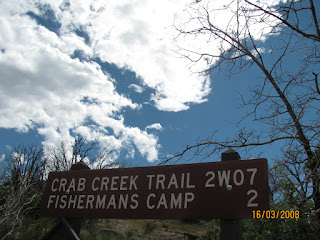 Once we crossed the creek we followed the trail across a ridge line, and finally started descending down into the canyon at a burnt stump. Fisherman’s Camp was about a mile further up the trail. There is a bathroom there and a campground, and hours of fishing good times! Fish on! 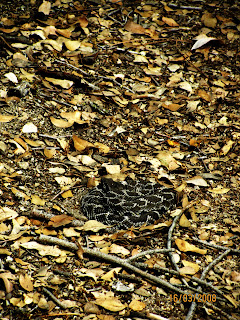 The trail going down is not exactly a trail. You pretty much make a trail, and head across this little valley sprinkled with purple flowers, head towards the sound of rushing water. The creek runs across this little valley cutting through the meadow. There are huge boulders on both sides of the creek, and a large pool about seven feet deep to swim. There is no place to jump here but this pool is the absolute best I have found. I have never run into another single person on this trail. It’s awesome! It’s about a five mile round trip, and most people don’t want to hike that far to swim. This is a different creek then Deep Creek, also and the water is not as cold, so you can swim here in May, and the water is nice. The fall back is there are a lot of Rattle Snakes around. I saw rattlesnakes every time I hiked here last year, including this guy, who I almost stepped on!
Its now early April and only another month until creek season starts; I can’t wait!