That Girl in the Red Hat

I tried to run Mt Baldy with friends the other weekend.
I failed in so many ways.
I did not reach the top of Mt San Antonio, more commonly known as Mt Baldy, at 10,006  feet.
I also lost my friends before the massive hike/ run even began and ended up doing the whole thing solo.
Even with all that, last Sunday was an epic day of mountaineering.
I ran/ hiked over 2,800 feet of elevation gain before I went to work for a eight hour shift Sunday night.
I pulled my exhausted body out of bed at five A.M. on Sunday morning and than drove thirty minutes farther than Mt Baldy into the suburbia of Los Angeles County and Pasadena.
If I was going to drive most of the way to Los Angeles on a Sunday morning, than I might as well make it worth the time and gas.
So I made a pit stop at my local Whole Foods in Pasadena.
Local to me is an hour and a half from my front door.
I’m addicted to juicing and fruit in general right now and I was intensely craving some organic blood oranges before the season ends.
Also there is a Noah’s Bagel’s next door to Whole Foods and I had plans to carb it up.
Than I got distracted by Whole Foods plethora of Cliff Bars (True story, I was enticed by new flavours like Luna’s Cookie Dough and Pure Organic Banana Coconut Bars for about twenty minutes.
By the time I ordered a fancy breakfast sandwich from Noah’s I was running hella late.
That is how I came to be eating a cream cheese egg and Anaheim chili gooey messy sandwich in my Subaru which is a stick shift, in L.A. traffic.
City traffic and messy breakfast sandwich’s and manual transmissions do not go together.
Hours later I would find left over egg in my handbag; not sure how that happened.
Suffice to say I was ready to get the hell out of the concrete jungle.
And I was now running late.
That is how I found myself driving seventy miles an hour up Mt Baldy Road, yes driving my Subaru like a Subaru.
It was fun.
Until I realized I was so almost out of gas.
And I had no cell reception.
And had no fucking clue where my friends were.
They drive a grey Prius just like every one else in California, so I parked next to a grey Prius, figured they had already begun up the trail and sprinted out of my car, spraying sunscreen on my arms and shoving things in my pack.
I had also been wearing sweat pants over my running shorts (My friend refers to them as my runners under pants, because, well, they are a little short) and I stripped off my sweat pants in the parking lot (I think people were starring) frantically shoved them back in my car and took off at break neck speed up the trail, passing hikers left and right. 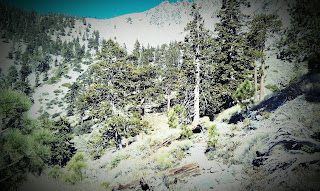 I was sure my friends were right up ahead.
I had run this mountain last Labor Day with my BFF for the annual Race 2 the Top of Mt Baldy. That day I had horrible altitude sickness and only made it half a mile from the summit. It sucked. This was my day to redeem myself, but I knew I had to leave Mt Baldy by noon to get to work on time, so I had no idea if I would even have time to summit today. The Run 2 the Top goes up the dirt road that goes by the restaurant and goes across the back bone of the mountain.
There is a single track trail you can take off the dirt road, the more popular Ski Hut Trail.
I honestly had no idea which way my friends had taken, so I completely guessed and took the Ski Hut Trail.
I think the Ski Hut Trail is actually known as the harder way. It’s shorter but more steep.
On Sunday it was actually way easier for me than it had been doing the road last Labor Day. I am in such better shape than I was nine months ago.
I asked multiple people coming down the mountain if they had seen three Air Force guys and a little blond girl and it soon became clear, they must be behind me or they must have taken the dirt road. 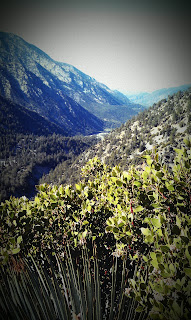 One way or the other I kept going. I was mainly hiking after the first two miles; the single track was very steep, rocky and had sheer drop offs in places. I was still going at a very fast pace and passing people left and right.
The views on the Ski Hut Trail were just gorgeous down to the valley below and Los Angeles in the distance. I took a few little breaks to enjoy the view but I was so pressed for time, I didnt stop much.
I was so glad we had decided to go early because it was getting hot really fast, even at nine thousand feet. There were a few little streams crossing the trail at the higher altitudes and I splashed myself good as I ran through them.
I had been running and hiking up for about two hours when I realized it was almost eleven and I needed to have turned around a while ago.
I met some nice people who informed me the summit was still three quarters mile away. Does not seem like much, but when you are hiking almost straight up in shale it takes forever. If I had an other hour I could have done it, but I will be back. I will summit San Antonio another day.
I ran the whole way down the mountain, passing people who I had passed on the way up who were completely shocked how far I had made it moving so fast and that yes, I was running back down the mountain.
I honestly had so much energy still.
The awesome thing was I ran into my friends at the Ski Hut Crossing! They were an hour behind me and at least we got to catch up real quick and have a quick snack break together.
They told me I was impossible to miss when they saw me galloping down the trail; the girl in the red hat who was running in  her under pants down Mt Baldy.