By Amber Wood on Wednesday, July 24, 2013
“Bitte ein Bier!” These words got me through Germany in 2007. Or maybe it was
“Bitte ein Kaffe! ”   Coffee and beer; two things the Germans do very well. Over the four days I spent in Munich I would have more than enough of both as well as Brats, German style potato salad, crackling pork knuckles, and apple strudel. Oh and my favorite German yogurt, Mueller’s of course. In 2007 I went to Oktoberfest with a group of friends who were mainly there to drink delicious German beer … I went to Munich to eat.
In 2007 I flew into England in late September to spend time with Mimi and John. After a few days of road tripping around England our eventual goal was Munich and Oktoberfest.  To warm up for Oktoberfest Mimi and John’s friends on base were throwing a huge Oktoberfest style party.  Mimi insisted that I be “on her team” for drinking games, which is pretty ridiculous because I barely drink. Our team was the “Wasted Wenches” and we had Fraulein costumes we bought on the Internet to wear, they were pretty cute. It was Mimi, I and her friend Jan on our team.  The party was awesome, it was a beautiful fall day about seventy degrees and sunny which is ridiculous weather for Cambridge, England. I traveled to England three times in the past ten years and this was the only bright sunny day I can remember in all of those trips.
The boys planning the party had thought of everything, they even had a bounce house, which I love!  They thought they were being sneaky when they brought baby oil to spray on the girls in the bounce house, but all the girls jumped out and the boys ended up spraying each other and wrestling. Oh boys, they’re dumb.  So us girls just ate brats and watched boys being stupid, and danced to the live band. The band was awesome, very Van Morrison sounding. . It was a great party and I got to know everyone who would be going with us to Munich in a few days. 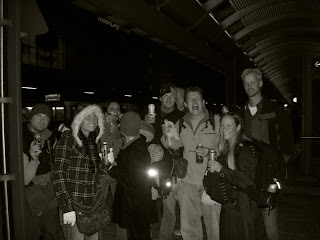 ﻿﻿to have them every night of Oktoberfest. When we came back to the beer garden Mitch was drunk. I sipped on my radler~ a mix of lemonade and beer and then we wandered out to check out more souvenirs and the haunted house. When we came back, yes Mitch was more drunk.

﻿      Oktoberfest ends around 10 p.m. and by that time Mitch was extremely drunk. I think the pictures say it all. Somehow we all got separated in the stampede to get back to U Bahn and Chris, Hannah and I were left in charge of Mitch. This would prove to be an adventure, between helping him to stand up, not losing drunk Mitch in the crowd,  forcing him onto the U Bahn,  watching him puke on the U Bahn, fending off drunken stupid Italians hitting on us, hoping we wouldn’t get kicked off the U Bahn and forced to walk and trying to make it back to our camp in one piece.  At the station Hannah and I ran on ahead through the dark wet forest to get the rest of the guys to help Chris take Mitch back to our camp. Finally we made it, and somehow he rallied and was fine enough to go out the next day, which was an Oktoberfest Miracle.
That night, it rained all night long and our tent was pretty much a big puddle, a big moldy puddle. It was freezing. I pretty much did not sleep for the whole time we were in Germany with the loud party crowd and the cold wet tent. Maybe that’s why I love the German’s coffee so much? 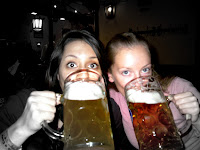 In the morning after another amazing breakfast we walked out to the train station. I don’t know how we were hungry again but we managed to stock up on amazing pastry snacks. I also bought a ton of German candy for souvenir’s. We settled in on the train for the ride to Andechs Monastery, which is on a hill outside of the town of Ammersee. I had some of the best food there I have ever had in my life, and the beer was phenomenal also. The monks brew the beer themselves. I enjoyed my first schweinshaxe, a roasted pig’s knuckle. One of the best pork products I have ever had. Plus we had some amazing stinky cheese, and German style potato salad, so vinegary and crisp. We had apple strudel for dessert which was like no strudel I have ever had ever.  I must have gained ten pounds while in Germany. I don’t even usually like meat and potato like meals, but everything I had in Germany was so full of flavor!
After another night of sleeping in a puddle, I got up in the morning to the sound and smell of horses. This did not bother me at all.  Riders worked their horses on the equestrian grounds every morning and I really enjoyed watching the show horses as we waited for everyone to shower and get in order to go. That morning when we got up the sun was actually out! What a great surprise! It was about 45 degrees out, still a little chill in the air, but it just felt so good to be dry for the first time in days! We hung up our towels and blankets on the outside of the tent to dry and walked towards the train station.
﻿
﻿     Half of our group was going to Dachau the concentration camp for the day. I had thought about going with them, but it just seemed so devastating, I deeply regret not going now.
I ended up staying in Munich with our group. We wandered over to the large outdoor market Viktualienmarkt. This market had everything; every item of produce you could ever imagine, a cheese shop, wine, little stalls with appetizers. I bought some marinated squid; it was so briny, full of vinegar. We explored the market and surrounding shops for awhile then walked over to Englisher Garten, a huge park. We walked around the park for hours, checking out all the different paths and the lake. We stopped to enjoy a tree swing before heading to the outdoor beer garden to meet the rest of our group for drinks. It was our last evening in Germany and we went out with a bang.    Mitch had a friend who was a pilot at Rammstien and had invited us to join their reserved table at the Lowenbrau tent.  We had an incredible dinner there our last night in Germany. We would head back to England the next morning, full of brats and beer. The best points of Germany for me were; every beer hall we went to, stealing Stein’s to bring home as gifts (Yes my super heavy suitcase was way more heavy on the way back!) The amazing Mueller’s yogurts of course, German chocolate, curry wurst and German style potato salad. Okay every single thing I ate in Germany was incredible!
﻿      I don’t have any great German Meet and Potato recipes but this recipe for German chocolate gluten free brownies make a fantastic dessert!
﻿﻿﻿﻿﻿﻿
﻿