By Amber Wood on Sunday, June 8, 2014
There are so many awesome places in Southern California to swim, fish and hike.
Lake Perris is not one of them.
To get to Lake Perris you drove through a place called the Badlands.
Seriously, is this a fucking Stephen King movie?
As soon as we began launching my buddies boat my first thought as the giant pontoon boat began floating in the water and I had a look around was that most of the people around us looked liked they were on parol.
I tried not to make eye contact with any one, less they try to sell me drugs and I have to shriek
” No thanks! I’m a republican! Vote for Ron Paul in 2016!”
( I think this is why gangsters don’t talk to me. We really do speak two different languages, as in I speak conservative.)
At last boat in the water and we sailed away from all kinds of future drug deals about to happen. (Seriously all I could think was what kinds of illegal activities bought those big ass boats and shiny SUV’s to tow them?)
I missed my mountains.
I missed Big Bear.
I missed lakes not full of slime.
It was an okay day setting sail on Lake Perris I mean I was on a boat with a drink in my hand, I just wish it was a nicer lake! 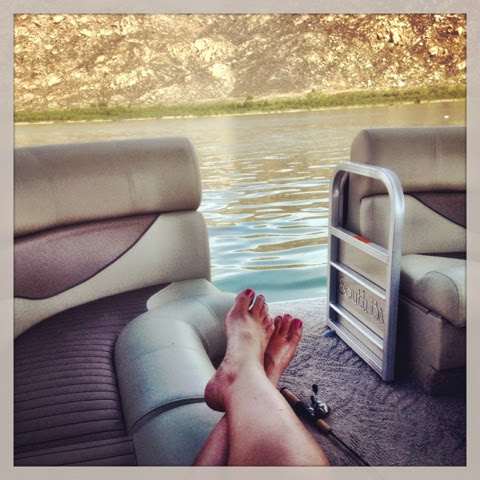 I couldn’t wait to get home and cleanse from the lake slime and the smog and make some delicious veggie filled Sweet Potato Tacos.