By Amber Wood on Thursday, April 24, 2014
” The View from San Jacinto is the most sublime spectacle to be found anywhere on this earth”
~John Muir

From my first ascent (Of many sure to come) of  mighty San Jacinto Mountain last May. At the time this was the tallest mountain I had climbed at 10,834. The entire hike was over fourteen miles round trip with a elevation gain of 4,590. This was our warm up trip for Mt Whitney the next week. I highly recommend this hike if you are training to do Mt Whitney. It’s a little shorter and easier than San Gorgonio via Vivian Creek.

I just made San Jacinto my bitch.
It’s been a long day.
My morning started at four a.m.
I didn’t sleep at all last night. I was exhausted and worried about today’s eighteen mile hike up to San Jacinto Peak and back.
I left my house in the mountains and drove six thousand feet down to the valley floor. I headed east towards palm springs and than up another mountain side, zig zagging my way up alpine covered mountain highways towards idyllic Idyllwild.
I hadn’t been to the hippie haven of Idyllwild in over ten years. It’s one of those small towns that I bet has not changed in fifty years even as smart phones and hybrid cars became all the rage.
The buildings are all cabins, rustic and charming.
Birds flit in the chilly mountain air and I’m so glad we decided to get a early start
to our day.
It’s seven a.m. when we meet at Humbar Park.
It’s seven a.m. and already sixty degrees.
I’m going to be hot today. I’m going to complain, I just know it.

Of course I strip down to my yoga shorts ( My bff Snow Flake calls them my runners undies)
They might be a little short.
Might as in she will tell me in many miles and miles as we approach the summit,


“you know your whole ass is hanging out, right?”
Whatever, they still cover more than most bathing suits. 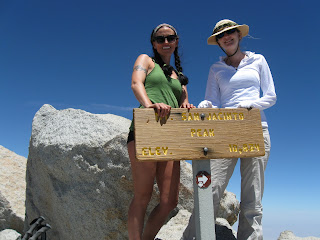 The beginning of the trail is all in the shade and it is truly gorgeous and pretty cool, weather wise. This area of the San Bernardino Forest must not have burned in decades. The pines are so very thick. Tauqawich Peak looms large granite and intense so high above to the east. It is intimidating, but I know we will hike much farther up than even that by nine a.m.
I’ve trained for this hike for months now. I did get sick at the beginning of May and I still have a lingering cough.
I joke to my friends as we traverse the trail.
” You can’t lose me in the forest, you’ll hear my cough” 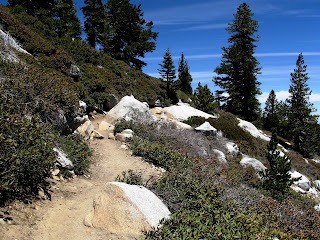 Than I sprinted about a mile ahead of them on the trail. I just have so much energy today!
The morning is growing warmer as we climb higher and higher into the lush forest. Near eight thousand feet we cross the Pacific Crest Trail. I love exploring new areas of the PCT and I’ve never been on this section of the trail before.
The first two miles of this hike were the steepest and once we’ve done that and crossed onto the PCT were still in the shade… Well I’m feeling pretty damn good I think to myself, glancing back at my friends making their way through the thick manzanita bushes that hug each side of the trail.
I consider the fact that if I did not have this damn cough and a pack with three liters of water in it, I could totally run this trail.
This was so much easier than I expected! 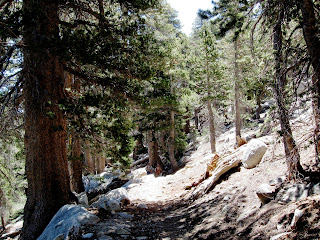 Around eleven a.m. we reached a steep branch of trail that was all in the sun and that was pretty hard. I do not do well with the heat when it is over sixty degrees. The trail quickly dropped down into a shady pine forest though and the altitude was still going up but I had expected this trail to really be a lot harder!
We crested the summit about one p.m. It had taken us about five hours, with lots of snack breaks to make it to the peak.
We took some pictures at the top, met some dirty old men, who were enamored with me. Gross,
than headed back down the mountain. I ditched my friends and ran most of the way back. 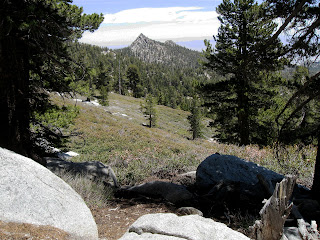 I ran most of the way when I was not falling. I took a good fall about two miles below the summit. Some how I managed to get my right arm out to take the brunt of the fall though. My teeth were just inches from the dirt and I was thanking god I did not break my face today. (How many times have I said that now?)
I pulled myself out of the dirt and continued down the mountainside back towards the car parked some eight miles away and four thousand feet down this granite and pine covered peak.
The road down was rough. It always seems like I run two miles to far.
The last two miles my calves hurt.
My legs ached.
But I knew in that parking lot in my SUV some where below me sat a cooler with six cold beers for my friends and I.
At least they were cold hours ago.
I powered through the pain.
Beer wins.