Life’s little problems seem real small when you almost step on a rattle snake in the middle of an empty forest. All I can hear around me are the birds chirping in the trees, the lizards scurrying through brush, and all I see is my life flashing before my eyes as my foot hangs in mid air over a black and white reptile. I just want to quote a certain well known Samuel Jackson movie right now, as visions from my childhood of collecting acorns in this same forest and sharpening pine branches into arrows, flash through my head. But any one who knows what well known action adventure movie I’m talking about, knows that would be rude wouldn’t it?  As visions of a life in Southern California flash through my head, I think to myself, if your life were flashing before your eyes what would you see?
I see myself running through endless alpine forests, and I see sleek thoroughbred race horses, coats sweating in the California sun shine. I see days spent on inner tubes floating down a creek bed in the summer sunshine with the best of friends, feeling as lazy as the red and blue dragon flies that buzz by my face occasionally.  I see two angry long haired cats who really want me to feed them some goat cheese, RIGHT NOW. 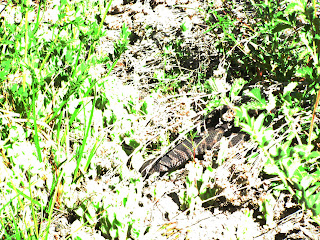 It’s funny how in an instant, I can completly forget about lifes little problems and contempulate a much bigger one. What if this snake had actually bit me?  In one minute my life could go from training for 10 K’s, running through a spring time forest to oh shit I need to call 911 and explain to them where in the boonies I am.
Luckily that sweet little snake gave out a big ‘ol  rattle and my foot did not even graze his body as my New Balance running shoes stayed a foot in the air and I let out a scream. There is no one any where nearby in this forest to hear my scream. I can see Lake Arrowheads aqua waters in the distance and if I was in a better frame of mind I would have taken a picture of the gorgeous view on this last day of May 2012.
Instead I tried to hold in the mini heart attack that felt like was about to rage through my body. As I stood ten feet away from that black snake, assessing the situation and trying to decide if I really felt like running further into the forest, I pulled out my camera and took a few shots. I did not even notice that my camera was set on the wrong setting (What does M stand for anyways?  M for Most buy sun glasses because the brightness seems to be turned all the way up?) I was to busy willing that snake to stay where it was to notice camera was set on M setting.
Luckily for me that snake didn’t care about me one bit. It gave out that one little rattle and just stayed stock still. If it hadn’t been for the rattle I would have thought it was dead! It was hidden in the leaves and flowers of a little creek crossing and I could barely see any of the black scaly body peeking out of the green leaves.
I had only run a mile at this point, down a road I had never taken before on a branch of road that shot out of Crab Flats Road and followed a leg of Crab Creek I would guess towards Cedar Glen. I wasn’t tired at all and man, I felt really awake as I starred down at the motionless snake in the wet weeds and tried to decide if I should cross the creek or turn back.
After contemplating the situation and waiting five minutes for the snake to move, I went way around him, watching him the whole time and continued up the road, that was becoming more and more corroded with sticks, fallen trees and weeds growing high. As I glared at a fallen Sugar Pine that blocked the road I thought, should I just go back? All I could think of was more snakes ahead of me. Suddenly, running was not fun any more. I really wanted to know where this road went, but I was freaking out and my heart was beating so fast. As I crawled under the fallen pine tree, I felt like Indiana Jones in the Temple of Dune, the scene where they are going through the cave with the spiders? bugs? I can’t remember, it’s been years since I’ve seen that great film. With every step I took, I felt like I would come face to face with the poisonous fangs of another snake. Luckily, the road disappeared completely into a forest burned by wildfires a few years previous. My decision was made for me; time to run back. That meant crossing that damn creek again and looking every where for that snake. He was no where to be found at that point, twenty minutes later.  With every step I took on the run back I felt like that snake would be inches away from my feet.