Run to the Top ( Snow Edition)

By Amber Woodyard on Thursday, February 7, 2013

It was never a life long goal to run to the top of Keller’s Peak.
I have spent many a summer evening camping at Keller’s, roasting marshmallows over a camp fire, climbing over its huge granite boulders, watching the sunsets over the valley below and driving the long twisting road to the top. The road going up is about five miles to the fire look out tower at the peak.
Last Spring I ran Exploration Trail which goes about three and a half miles up near the summit of Keller’s Peak. Than I ran back down Keller’s Peak Road. Running down was the hardest part. My knees and legs were aching so bad by the time I got to the bottom. At that point I had only been running about six months. That was run was so hard. I never imagined I would do anything like it again.
Until today, that is.
Today I ran up Keller’s Peak Road, in two inches of fresh snow, no less; and back down again.
I actually just started to think about this run the other night. I was mulling it over as I tried to fall asleep. The run from the gate at the bottom of Keller’s Peak to the top is about ten miles. That’s not really to far considering around ten miles are what my longer training runs are coming down to these days.
The last few nights as I lay in my warm bed I have been considering doing this run. Than I thought what would be really cool would be to see Snow Valley Lake at the top of the mountain in winters weak light. I bet it’s really pretty with a dusting of snow on the Manzanita covered hills.
I decided that today being my day off I would run from the locked gate at the bottom to Children’s Forest and Snow Valley Lake near the summit of Keller’s Peak.
I did not realize that it would actually snow two inches last night and this new snow fall would stick around all day long. This would put a slight hamper on my plans.
When I drove to Keller’s Peak and parked my SUV on the unplowed road I was all alone. There were fresh tracks in the snow, some one had been here walking a dog this morning but they were long gone now. 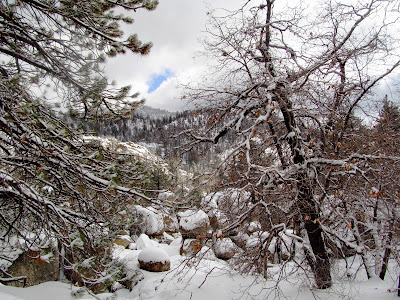 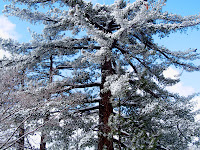 As I grabbed my Cat Tracks, sun screen and turned on my GPS on my phone my fingers were freezing in just a few minutes. It was almost twenty degrees out at about eleven A.M. The storm was suppose to clear out leaving a sunny yet cold winters day behind but it was still overcast and my fingers ached they were so cold as I quickly pulled on my gloves and began running up hill.
It soon became clear to me this was going to be really fucking hard. Running in snow up hill is really hard on your calves. Half a mile in my calves were aching and I was actually heading back to my car to grab my snow shoes instead. I did turn back around though and back up the mountain. I really wanted to run this morning, not snow shoe and I could see patches of bright blue ski here and there. I was sure this storm would clear up quickly.
I told myself I would run up hill until my feet were wet and uncomfortable than I would turn around. I even had dry shoes in the car so if I did not make it that far I could just come back to the car, strap on my snow shoes and hit one of the trails instead. 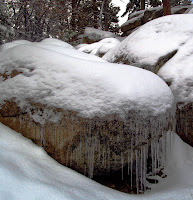 My calves were truly aching as I began my trek up hill on this kind of overcast day. The sun was trying so hard to come out. The sun and clouds made for such a beautiful day. There was no one out in the forest with me. There were tracks of man and dog that went about a mile up before turning around.
It was clear that on this cold day no one wanted to stray into the forest to far.
I did want to turn around after the first mile and I almost did but I powered through and before I knew it, I had gone almost three miles and I was about a mile from Children’s Forest!
I was really excited.. The Arctic lake was just over those hills!
Than I realized, shit, the lake was probably frozen from last nights storm. This was not going to be the pretty view I had been hoping for! 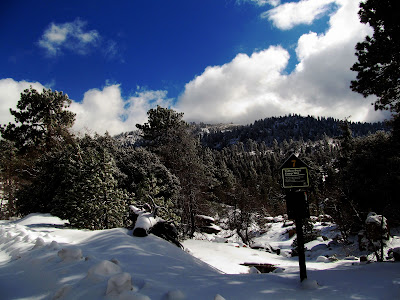 I was not turning around at that point though. I still have a month of half marathon training ahead of me. I will have to run this road again on a more defrosted winter day. 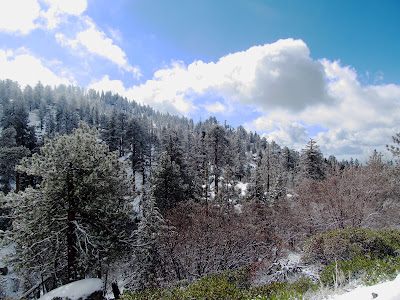 At this point in my run I was not even cold any more. My legs were getting really tired though. I was fast approaching Children’s Forest. I was close to the summit of Keller’s Peak. 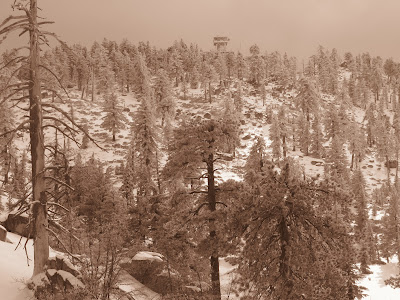 The Keller’s Peak Look Out Tower seemed to be so close to the altitude I had run to!
I was surprised to look over at the Snow Valley Resort and I could see the ski lifts I had run so far! 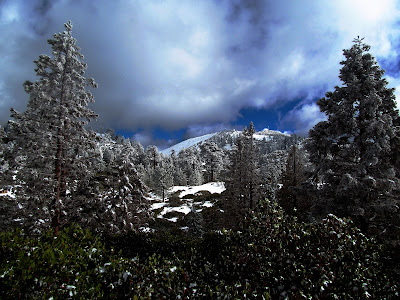 Even Slide Peak, the tallest peak in my area was surprisingly close. It sits at about 7,400 feet. 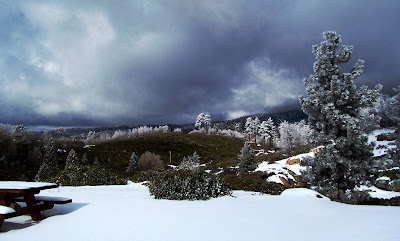 The road that branched off to Children’s Forest had not been plowed at all all winter long so it was kind of an adventure with snow up to my knees in places. 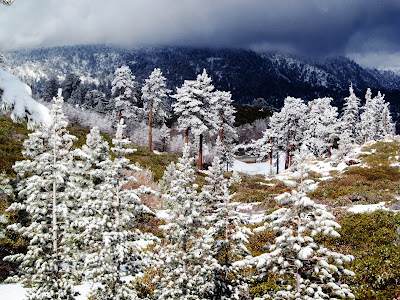 Eventually I made it to Children’s Forest and took a few pics of the lake. 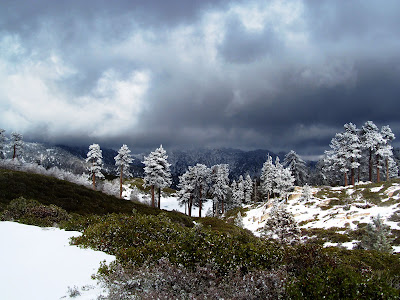 Yup, there really is a lake there, it is pretty frozen. 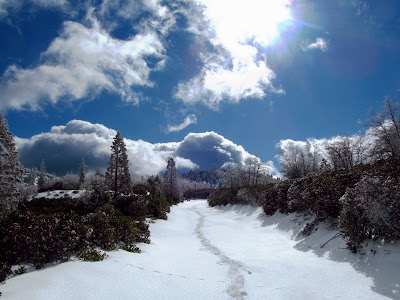 I am going to have to come back for sure. I do know that next time will be easier. Running in two inches of snow a total of almost ten miles was so hard, it has to get easier next time, right?
I did want to continue up to the summit at Keller’s Peak, but the clouds were dark, really dark at this point and I was afraid there might be another storm rolling in, so I turned around back the way I came.
Even heading back before the summit I still had well over a thousand feet of elevation gain! 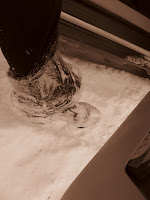 The run down was pretty easy, although I had so much snow stuck to the hem of my pants, it looked like I was wearing bell bottoms!

I was thrilled when I reached the bottom of the mountain and had dry boots in the car to change into!

In all my altitude gain today was over 1,200 feet! Wow, pretty impressive for a run that I wanted to quit the first mile in!

I went to the post office real quick after this and I had a hell of a time walking. The bottoms of my pants were completely frozen solid with ice and snow and the weight of it was pulling my pants down! I had to hold my pants up the whole time I was in there! 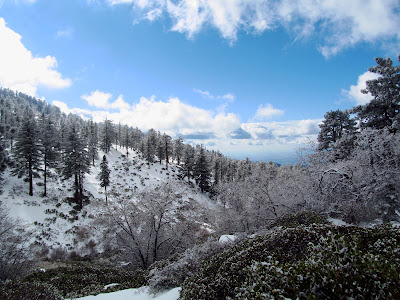 I Used to be a Runner