Last week I spent my days off camping in the mountains. Yes, camping a mile from my house. Camping right outside my front door is actually quite nice. It means I can simply drive home (thirteen minute round trip) when I forget camping essentials (Like my super warm Uggs) It also means the store is only two minutes away when we run out of beer. Yea.
The area we chose to camp in on this August evening is called Keller’s Peak. Its up a windy road near the rustic mountain town of Running Springs. The altitude is over 6,000 feet. There are pine trees and manzanita bushes every where, its so mountain pretty up there.  Its not a well known spot. Pretty much only locals know about it; and the well kept secret… You can camp at Keller’s Peak for free!
There are nine designated camp grounds and there are no reservations. There are posted signs you can only camp at Keller’s Peak for fourteen straight days. I think that’s because some people, I suspect might pretty much live up there in the summer months! Some of the camper trucks we passed on the way up looked like they hadn’t moved in a while. With only nine camp sites available you just have to hope that the resident hippies haven’t taken all of them!
The down side with camping in the San Bernardino National Forest? For the most part campfires are illegal. So I was surprised when a friend of mine told me she thought we were allowed to have camp fires this time of year at Keller’s Peak. Sure enough, their website informed me to just stop at the Ranger Station and get a permit.
The ranger station is less than a two minute drive from my house so this wasn’t a problem. We would grab a camp fire permit real quick from smokey the bear. Or so I thought. What I didn’t expect was to walk into the Running Springs Ranger Station and be greeted by children. Yes, this local Ranger Station was maned by a spunky group of fourteen to ten year olds. Only in the mountains. Okay it had to be some ranger in training kind of program, which is pretty cool and a great way for kids to spend their summer but still it was pretty hilarious that the kids are in charge of handing out these legal permits. I guess the children didn’t think i would start a wild fire because they gave me a permit no questions asked. They didn’t even ask if I had a shovel to put out the fire! This doesn’t sound very safe for the future well being of the forest to me. I’ve gone through plenty of evacuations. Wild fires are no fun.
With margaritas in the cooler and a crisp fire permit in hand we made the drive up to Keller’s by around two. Good thing we were so early; all but two campsites were already taken! The one we chose was awesome. It was a quarter mile down a dirt road, so far off the road and no where near any other people. We took our time setting up our tent and gathering fire wood, we still had lots of time before the sun would set. That’s when the bugs started coming out. Luckily as the sun set low behind the trees I whipped out my 35 percent Deet burn your skin bug spray. I believe that’s about as high a Deet percent as they sell, legally in California.

I was looking forward to an evening with a campfire gazing at the stars with friends, but was soon disappointed to discover a full moon and an evening so bright we could barely make out Cassiopeia. Boo. We did however have a fantastic evening sitting around the campfire drinking beer, than switching to smores and listening to country music, blaring from the speakers of my Subaru. It was nice not to have any neighboring campers anywhere around us!
As night descended it started to get cold! So weird for August. Some August nights it’s still in the seventies up here! I was glad I had changed out of my sandals and into my comfy Ugg boots to keep my feet warm. Although I hadn’t brought any socks; big mistake. We put out the campfire and made our way to bed and I soon discovered my feet were freezing and we had not brought enough blankets. Yes, even though it was the middle of summer it was freezing cold in the mountains. 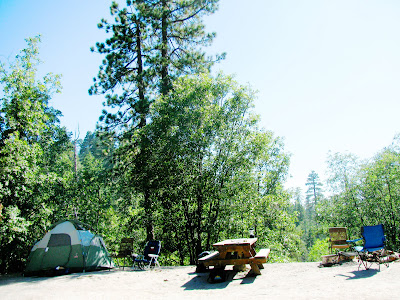 I did manage to at one point fall asleep anyways, but was awoken in the night by animal noises. At first, I thought bear of course but it sounded way quieter and I heard bottles clanking. I knew that sound anywhere. Alcoholic Raccoons! Okay, before we went to bed I had put all the food in the cooler in the car. I hadn’t really been thinking about the trash however and I left it in the bed of the truck. That was kind of dumb.
I hate being blind. I can’t see a thing without my contacts. I fumbled around the dark tent trying to find my glasses, finally locating them I took my flashlight out into the bright light. Yes, a very bright night. I didn’t even need a flash light to see the cute masked bandits trying to sneak off with a crust of brie cheese. Yes they are yuppie raccoons I guess, enjoying left over Fat Tire Beer and St Andres Brie. Their Fancy huh? I scrambled to collect all the messy raccoon slobbered on trash, threw it all in the backseat of the Tar (I’ll worry about the smell later) and shivering something fierce I ran back to the tent and climbed back into the sleeping bag. Maybe I’m getting old, but even sleeping on a sleeping pad and a down blanket, that ground was really f’ing hard. I guess its spose to be good for a bad back though, right?
I’m really glad I made myself get out of the only slightly warmer tent to go defend our trash from the masked bandits. It was so distracting listening to the partying raccoons clank beer bottles together. I can’t believe I left the trash out. I’ve camped so many times. Newbie mistake, right there. 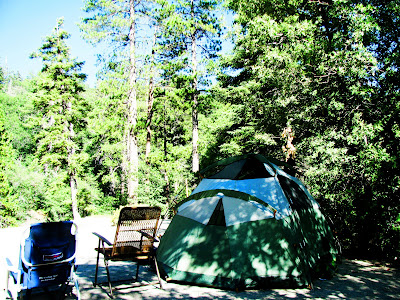 I managed to get a little bit of sleep after that. My alarm went off at 6 A.M. I had to get up early to pack up the tent so I could go to work cleaning mansions in Lake Arrowhead at 9 A.M. and that was prior to my real job of shucking natural foods to yuppies in the valley below, that afternoon.  We woke up to a gorgeous blue sky full of pink clouds from the sun starting to reflect off of their puffiness. I also woke up almost being able to see my breath. Yes it was 39 degrees when we got up. In August! I wish I would have taken a picture of the gorgeous sunrise but I was freezing and started frantically throwing chairs in the back of the tar in an effort to warm myself up with some exercise. 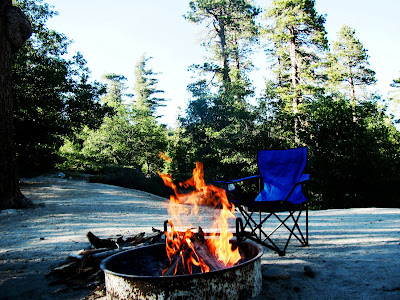