By Amber Wood on Monday, May 5, 2014
When I think back to my favorite race ever that would be for sure the time I ran the Red Rocks Half marathon. I did this race with my best friend and it snowed the night before. The mountains outside Las Vegas were beyond gorgous. This however is not that blog.
This right here is a blog about that one time I dated a Canadian Dumb Dumb who caused me to miss the 2014 Red Rocks Half Marathon. I also mixed the 2015 race as I was injured and am still injured.
But 2016 here I come!
Linking up this week with the FitBit blogging challenge.
I’ve been in near constant pain almost every day for two months but today I over came that pain and ran to the top of a mountain.
If ever there was a day to overcome fatigue and pain a gorgeous very early autumn day in a forest changing colors with the season was the perfect place to make it happen.
I had hiked to the top of Grey’s Peak before but never run the sandy trails through the pines all the way to the granite boulder strewn top. This is where our local bald eagles nest in the winter months.
Early fall is a great time to do this hike/ trail run before the area is closed as a eagle sanctuary all winter.
I’ve been plagued though out the end of the summer with injury after illness and I’m feeling horrible as an athlete.
So of course this week I decided that next February I will run my first marathon.
It’s always when you are feeling down and out that you make the most grand plans and the come up with the craziest adventures or maybe that’s just me?
I had plans to run the Red Rocks Marathon last February but my plans were way laid by a retarded Canadian.
Well I didn’t realize he might have been retarded at the time and I think I might not have noticed what with the cute Canadian accent, eh.
I was training hard core last winter for my first marathon when I started dating The “special” Canadian, eh.
I had grand plans of running my first 26.2 and I was super excited about it and my training was progressing well through out December 2013.
Than he offered to take me on a seven day cruise to Cabo.
The same dates as my marathon.
I thought it through for about five seconds.
Run 26.2 miles or drink and eat and party on a ship down Mexico way for a week?
Before you could say fartlek my expedited passport info was in the mail.
I was on the way to Mexico … Adios California and marathon dreams 2013!
Now this is where in the story I make the realization that he might have honestly been mentally retarded. 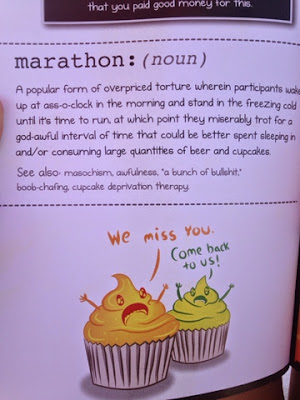 The “special” Canadian does not get the days off for the Super Bowl so he calls into work. And than he calls in to work the two days after because I guess he’s just that hung over? After that he dosnt have enough vacation days to go on the cruise. So the cruise was cancelled, which honestly wasn’t that big of a deal, I was just so pissed at myself that I stopped training for my damn race!
He told me after we cancelled the cruise
” Well you can still go do your marathon eh!”
And I had to explain to him,
“You can’t train up to a marathon in two weeks time!”
I’d like to say that’s the end of the story but than he showed up on my doorstep crying one night.
That wasn’t awkward, eh.
It’s now close to nine months later and once again I have 26.2 in sight.
It’s far, far away, down a road that cuts through red rock canyons some where in Nevada but yes I have that marathon in my sight and now I just need to stay healthy and train up to it!
Today was a great day back at training; 7.3 mile run followed by a two hour kayak.
I’ve also been researching cruises with the intention of actually going on one this time. I’m making sure I count my vacation days this time.
Red Rocks here I come!
canadians Las Vegas Red Rocks
0
Previous Post
Next Post

Coconut Cream Cappuccino ( made without a espresso machine!)

I Choose to be a Runner

Pumpkin Raviolis with Pancetta and Sage