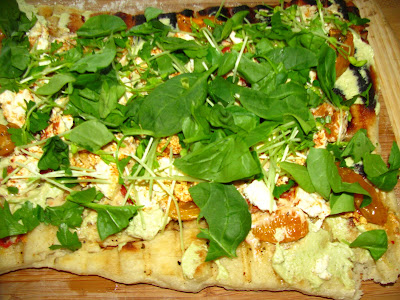 Pizza dough
Flour
Edamane hummus
Tahini sauce
Sun dried tomatoes
Feta cheese
Red pepper flakes
Sprouts
Spinach
Lots of olive oil or garlic oil
Roll out the pizza dough and flour. Turn the gas grill to very low heat. Oil one side of the dough, heavily. Make sure all of your other ingredients are assembled at this point, ready to go. Put the dough oiled side down on the grill. Oil the other side of the dough. Close the grill. Wait one to two minutes. Open the grill, with a metal spatula check the dough to see if it’s cooked, but not burned. When it is, flip the dough. Cook until just browned on the other side.
Move the dough inside, spread with the hummus, and tahini sauce, than feta, the chili flakes, sun dried tomatoes and garnish with the veggies.
My power did not come back on until well after eleven A.M. The first thing I did was make a claim online Edison’s website. Their website said they would get back to me in three days. A week later I called, and was told it takes two weeks to process a claim. Okay, whatever. Than today a claims adjuster calls to tell me my claim was denied.
I argued up and down with the guy for thirty minutes. He said they had mailed me out a card warning of the outage and it’s not their fault if I didn’t receive it. Then he told me it’s normal for the power to go out in mountain areas for up to three days at a time. I told him, I have lived in this area 26 years and never experienced a twelve hour outage, except when the whole mountain was evacuated for two weeks during the wild fires. My neighbors haven’t heard of an outage that lasts this long either. He then told me that I’m the only person in my area to put in a claim, when I know for a fact several of my neighbors have also put in claims. So after half an hour of arguing with the guy, I lost my temper, my mountain rage appeared and I called the guy an asshole and hung up. Stupid mountain life that I love.
0
Previous Post
Next Post