A Path Through the Ice Plant

Sometime I dream about Mexico; The foggy beach mornings, walking through the ice plant down to the cold ocean below the beach houses, and the fun times I had in Baja California with friends when I was in my early twenties. 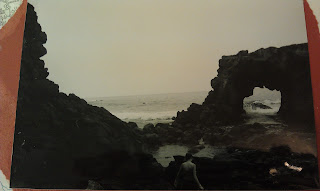 I don’t dream of the Mexico of 2013 with the drugs and the gangs and the violence. I dream of the Mexico I experienced when I was eighteen years old and we told our selves it was safe to cross the border into a third world country and eat as many fish tacos as we could consume in twenty four hours at Just for the Halibut in Rosarito Beach. We were not afraid of Montezuma’s Revenge or the Federales with huge guns resting on their shoulders as we sped past the toll stations that littered Highway One on the Baja Coast. We ate as much street food as we could consume, squeezing the tiny Mexican limes and feeling the sticky juice run down our hands as we squeezed the tartness over yet another fish taco.
I ate a lot of fish tacos between 1999 and 2004.
Our group of friends would steal the keys to Jenn’s families beach houses a few times a summer. We would make the three hour drive from our small mountain community, through the traffic of San Diego, usually crossing into Tijuana late at night. Jenn was usually driving and she was usually speeding many kilometers over what the speed limit was as we left the odors of Tijuana behind and hit the open highway to the beach houses.
We would usually roll into Los Olas about midnight or so and once we convinced the gate keeper with the cattle prod
“Oh yes sir, Senor Lawler is totally okay with his grand daughter and all her teenage friends using the houses for the weekend”
Most of us would run into the ocean below the patio area of the beach houses. There was a path that led to the sand through fields of lavender ice plant. We would carefully climb down the sandy steps into the cool night and then we were on the beach, ready to shoot off fire works that were legal here, drink margaritas and build a bonfire. 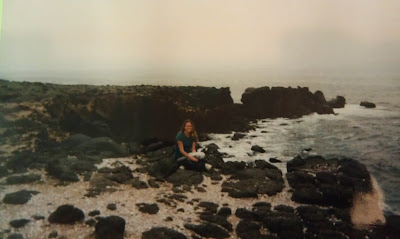 Sometimes I dream at night of the sharp tang of that ocean smell and I can see the waves through the overcast mornings. We would spend all morning praying that the marine layer would burn off and that hot, hot Mexico sun would come out.
We would spend these overcast mornings hiking down the beach through the ice plant to the cliffs that rose up to meet the ocean. If it looked like it would be to foggy and cold all day we would head into Ensenita to shop at the Giante Supermarket for giant liters of no name tequila. It was pretty much lighter fluid; it’s amazing no one ever got sick.
It’s so embarrassing now, but us girls would stick to buying Boone’s Farms in Strawberry or Peach Flavor. Thirty year old Amber feels her stomach is queasy just thinking about that fruit juice/alcohol. I’m glad I grew out of that and moved on to fancy beer and wine.
My memories of Mexico were such a fantastic experience and something I feel I will never get to live through again. I miss my Mexico memories and that path through the ice plant to the Pacific Ocean. I’ll Have the Nut Cream; Regional Cuisine of Baja