By Amber Wood on Sunday, September 13, 2015
I didn’t want to go to Venice.
I know, I know, everyone says it’s the most romantic and one of the most beautiful cities on earth.
All I could think about was, I do not want to eat Italian food for four days.
I grew up eating nothing but pasta. When I was a young child if we were not having lasagna for dinner we were having spaghetti, if not spaghetti, then manacotti. Some times my Mom would throw together a creamy fettuccine alfredo, that okay, maybe I did enjoy a little bit. Yet, I completely can not stand those red sauce smothered pastas. After years of eating pasta after pasta that I hate, that is when I taught myself to cook, my mom tells me.
I was tired of Italian food.
My family isn’t even Italian!
My mom is Jewish! Oh don’t worry, I ate my share of Matzo Balls when I was a kid as well. I don’t like those now either. I do love some Jewish foods like Halvah, the sweet sesame candy that crumbles like sand in your mouth, in a good way. I’m a huge fan of mouth watering liver. It makes my mouth water anyways. My mom and I ate a ton of liver when I was growing up, while the rest of the family looked on in disgust. Liver is the only food I have ever cooked for another person that was promptly thrown up and not digested (Thanks Scott)
Veering away from the topic of vomit…
In 2009 I flew to Cambridge, England during the bleakest winter Britain had seen in years. I went to stay with my best friend Mimi and her husband John. I had such a great time in England and if you’re thinking of visiting, I would 100% recommend it. I went to London, York and I even visited some historic houses similar to Adlington Hall. I had a fantastic time. We wanted to travel to another destination in Europe while I was out and they wanted to go to Venice. I would’ve been happy to stay in England but Mimi and John wanted to head down to Europe.
I have always wanted to go to Spain, or Belgium, or anywhere that didn’t cover their noodles in a dreary red sauce that all tasted like tomatoes. Every pasta dish tasted the same to me; bland.
I was, however, outvoted, by the twelve other Americans we would be traveling with and Venice it was. I resigned myself to at least not overeat on this European vacation as surely I would hate the food.
The moment we disembarked from our Ryan Air flight and sat down on the water taxi that would take us to Venice I instantly knew this was going to be a fun vacation even if the food wouldn’t be. Venice was truly glorious. The water taxi sped across the ocean to maroon us at a city built on stilts that sat in the middle of the ocean. That first sight of Venice was truly incredible. We pulled our luggage through the streets of Venice, not a car to be seen any where. There were no vehicles on Venice, a fact I learned as we deported the little boat. We left the water taxi at St Mark’s Square and under a sky filled with sunshine we made our way less then a block to our hotel, right adjacent to St Mark’s Square.
I was sharing a room with two other girls, Jess and Dawn. We threw our luggage in the door, took a peak out this window, and were ready to face Venice! 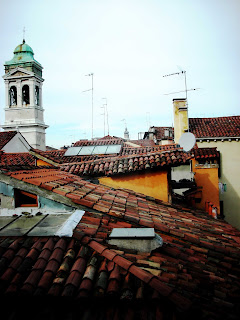 Yes, this was the view out our window!
Look at those rooftops! Glorious!
Bags thrown on beds, we were out of our room and on the streets of Venice ready to explore this famous city.
When we had left a chilly damp England the temperature had been in the twenties. I love the frosty cold days, but two days of damp cold misery had left my bones aching for sunshine.
When we stepped onto the streets of Venice I felt the sun on my cheeks for the first time in days. I was craving this much needed Vitamin D, and I started to feel a little less grumpy about pasta, pasta, pasta.
Than I discovered gelato, and I got a ton less grumpy.
Yes, it’s true. At twenty seven years old until I walked the streets of Venice, I had never had Gelato. It was only forty degrees outside and we were all bundled up in sweaters, scarves, hats and gloves but you would have thought we were in the Bahamas the way we inhaled those dolci gelatos in the sunshine, the sticky sweetness sticking in our gloved hands. Venice had been flooded a few days earlier and the wooden cat walks still could be seen in all the streets. We used those wooden platforms as benches to lounge on, enjoying our desert in the sunshine. 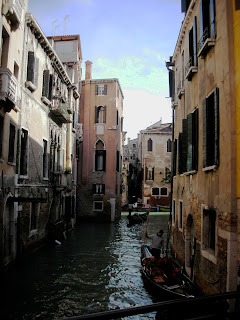 Our gelato break in the morning Venice sunshine was a glorious way to start a vacation!
But after that everyone wanted real food, and I buckled up to be forced to eat pasta, ew.
Every tour book you read warns Americans, what ever you do, do not go into the restaurants that have the menu in English. These restaurants are like the McDonald’s of Italian food, the food is catered towards Americans from Texas who like ranch on their salads and the food will be crap.
So what did we do? We walked into the first restaurant we saw with a menu in English.
The food was outstanding. Every restaurant we went to in Venice had fresh baked bread, olive oil and aged vinegar on the tables to start. The olive oil at every place we went was simply incredible. It was like no other olive oil I have ever had in my life.
From that first oily swipe of bread and fat on my plate I found myself hooked. Plus when I opened my menu I found a Gorgonzola pizza and I love me some blue cheese. I was a little guarded walking into that cozy restaurant, but as I drowned my sorrows in amazing olive goodness, I mean olive oil and a crunchy crust of bread, I was feeling more upbeat. 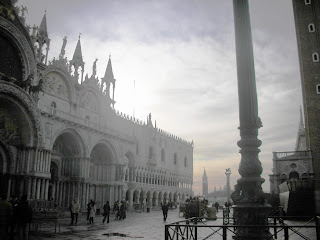 Then a tomato covered and blue cheese adorned pizza was set before me. I had to eat the whole thing. We had no fridge in our room. It was one of the best pizzas I’ve ever had in my life. The crust was crispy perfect, almost with a sour dough consistency. The sauce was tart, tasted like the tomatoes had just been picked from a summers garden. The cheese was a salty party of blue cheese heaven in my mouth.
That was my first meal in Venice. It began with dessert first, as vacation meals truly should. I had my doubts when I boarded that air bus in Brittan. Thank you Venice, for proving me wrong.