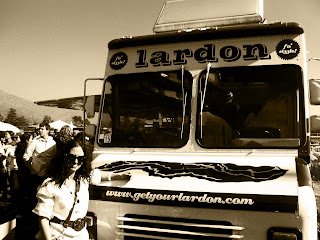 “Hey Janette, stand next to baconmoblie!” Which obviously is the best food truck of all.
“um, no”
“Please! I’ll take your picture!”
“No”
“But its bacon! Bacon, bacon bacon!”
“Amber, I’m an Adventist!”
“Wops, I forgot” The scene is the infield of Santa Anita Race Track, Arcadia California. Janette and I are on a mission to eat lots of food from lots of food trucks and this infield is filling up quickly with a lot of very hungry horse racing fans.
“Is it rude to belch during the singing of the national anthem?” I politely asked Janette as we watched the horses enter the paddock two food trucks later. 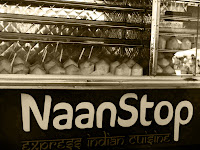 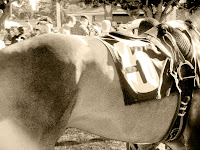 What if you’re attending a food truck fest and you just consumed a tasty micro brew? Still rude? Probably. But the race track is no place for manners, and judging by the mullet and tattoo toting guy to my right it’s no place for deodorant either. It is a beautiful sunny day in Southern California in January, and it smells like armpits. The weather guy said it would be 67 today in Arcadia but I would think it’s at least 76, In January. Because of this beautiful day we have ventured far from our home in the snow capped San Bernardino Mountains to Santa Anita Racetrack two hours to the west. Okay were not here just to witness the talented Thoroughbreds make history happen on this 9th annual Sunshine Millions day. Were also here for the gourmet food trucks. 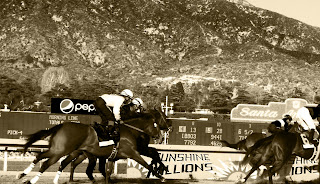 Sunshine Millions day is a contest pitting California racing against Florida. All the stakes races run on both cards on opposite coasts that day are for California and Florida-breds, and whichever state wins the most takes the title. It’s a contest between Santa Anita Park in Arcadia, California and Gulfstream Park in Hallandale, Florida. This would be an epic sunshine millions day. There are no Best Pals, Swaps or Dr Fagers, legends of the Sunshine States glorious past, running for the title today; but we did see a record number of upset winners. Lucky me, I picked most of them! Including the biggest price of the day, a horse that paid 56 dollars to win! 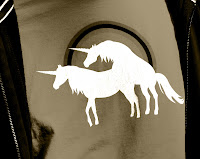 We arrived at the Santa Anita infield starving and ready to eat at 11:30 right when they were opening the gates. The first thing we did was head right to the food truck fest, where 25 of Los Angeles most gourmet food trucks had set up their various cuisines. I had planned to head straight to the Lobsta Truck, but even ten minutes into the food truck fest the line was SOOOO long! There had to already be 100 people in line. We were searching for the BBQ truck, but we came across an Indian truck, the Naan Stop and the line was short. Jannette and I love us some good Indian food so a hot lamb naan-which it was. Did I mention the lamb was slow roasted for four hours? The guy who worked for the Naan Stop was super nice, telling us this was there grand opening and they were searching for venues to serve. I suggested they do Big Bear, just three short hours from L.A. and we all had a nice laugh. Mountain people, they’re crazy! Then I saw a guy wearing a shirt with humping unicorns and I was distracted. Hey, Unicorns have urges too!
Luckily our lamb-which’s arrived before I could take to many pictures of unicorn love. They were amazing. The Nann-which’s, not the unicorns. I also ordered a side of naan and dips which came with a lemony tangy raita that I might have had to drink if no one was looking. Yes it was that good.
We were so into the food that we had to watch and listen to the first few races of the day from the infield. I wish I had a chance to lay eyes on RunFlatOut, the impressive winner of the second race. This was a horse that had been well spoken of in the press, and he won this, his first race in a fast time easy. He could be looking towards the Kentucky Derby later this spring.
By the time we had finished round one all the food lines were incredibly long. I could have gone for another snack, but we didn’t want to wait in line anymore. Luckily there was no line at the Margarita stand! I grabbed a margarita for the road and we went to the paddock to watch the horses being led out for the third race, in which my horse would end up finishing last. 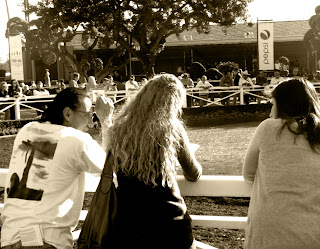 We had a great time inspecting the young horses as they were led around the walking ring. There was a bit of excitement when one of the favorites, Evening Jewel freaked out in the paddock. She’s getting near breeding age and sometimes older mare’s loss it between the ears when they grow up. 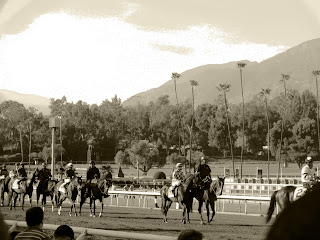 By the fifth race my luck seemed to be turning around. I picked Amazombie, who we then started calling Amberzombie, and he won easily paying 26 dollars to win! This is the best part about horse racing; the elation you feel as thousands of pounds of horse flesh comes screaming past you and you watch your horse cross the wire first. I pumped my fist in the air and screamed with joy as the horses galloped out past us. We were in a much more upbeat mood as we watched the feature race from Florida in which I had money to win on Tackle berry and he won easily too at 27-1 ! We watched that race on the big T.V. screen in the paddock as we were waiting for the horses to be led out for the next race in California, and I was the only one in the paddock area yelling for Tackle Berry. At one point before the race he had been 57-1. Unbelievable considering Tackle Berry has won six of ten races now! Not only that but the next live race at Santa Anita I had picked the eventual winner Caracortada, a horse I have been following for a year now, who would pay over nine dollars to win. I ended up leaving the race track over a hundred dollars ahead! Not before we ventured back to the Food Truck Festival for some Donut Ice Cream though. It was all in all a great day of food truck and horse racing fun and I had picked up some great Professional Horse Racing Tips that I would be able to re-use for the rest of my horse racing career!