Today I fell up a mountain.
It takes a real talent to fall uphill but luckily, well I am a talented girl.
I should point out the road we drove than ran up was incredibly icy. 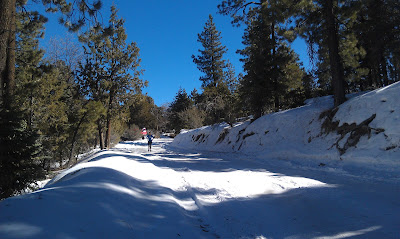 We off roaded up Pilque Canyon Road to this point where we parked the just detailed a month ago Outback in the mud. Yes, look at that pretty mud

We all knew it would not stay clean forever, at least not in a typical  mountain winter. There is melting snow every where and red cinders on most roads for those most icy days. Cars don’t stay clean in this community in the months of January and February.
Snow Flake was staying with me for a few days and we had it in our minds that we would train none stop for three days for our up coming half marathon. It hadn’t snowed in a week and it had warmed up to the fifties and almost reaching near sixty one day, so I figured if we drove to nearby Big Bear there would be little snow on the trail.
Holcomb Valley where we intended to run was on the desert side of the mountain range any ways and I was really thinking there would be little snow at this point.
I forgot that Holcomb Valley sits at almost eight thousand feet. 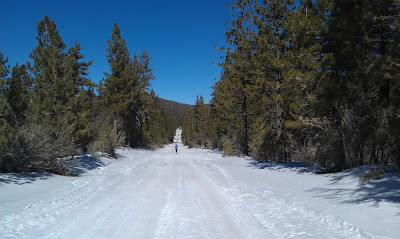 Yeah, there was at least a foot of snow every where.
When we began the run the road was pure ice. Snow Flake had never run in Cat Trax before so I let her borrow my pair. I really did not expect us to be running in snow the whole time. I did not think I would need them.
Cat Trax are super cool. They are like tire chains for your feet. They are mainly elastic bands with studded undersides. You put them on the tread side of your running shoe.
Snow Flake was wearing the Cat Tracks and I was ahead of her on the first big hill. She is so much faster than me, but on the hills I am way faster than her. She had a great view of me as I took a bad slippery step, just as I realized I had chosen a very bad trail through the snowy road and was on the most icy part of the road I could possibly be on.
Than I fell up hill hard and landed on my hip and arm.
It must have looked really bad because she could not believe I was okay.
I just jumped up and started running up hill again. 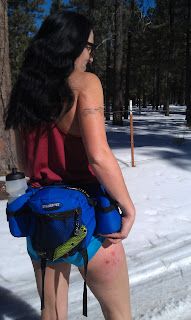 It wasn’t until a half mile later that I realized yeah, I was in pain. My hip and right side hurt and would be sore for days after this.

I took a bad fall but we still managed to run a total of ten miles up the rest of the summit and than down the last long hill to Holcomb Valley.

I had never seen Holcomb Valley in the snow before, it was so gorgeous! Such a great day, even if my right butt check was a casualty!

It was a great winters day to do this run. There was snow every where and I was running in shorts and a tank top and yes I was pretty damn hot  by about half way through.

We were both exhausted by the end when we came to this hell of a hill. It was the last hill before the car. I was hurting bad at this point. Usually ten miles wouldn’t be to hard on me but the fall had made me instantly sore. 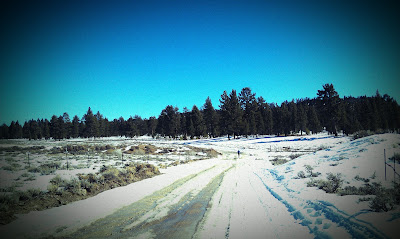 I’m so proud of Snow Flake! This is the farthest she has ever run!