I haven’t destroyed my body on a trail, got lost, had a dead battery on my cell phone, and wondered if I was going to end up having to backtrack 30 miles in one day in so long. I guess it was about time for all of that to happen on the same day. Just a precursor to this story; If I had been not been hauling a mountain bike straight up a steep jeep trail this would have been a fantastic day in the forest, but unfortunately while hauling a mountain bike up said jeep trail, my shoulders muscle burning and sweat dripping down my back made for a completely different expense, If I had been hiking this trail I no doubt would have enjoyed the fantastic views over Holcomb Valley far down below me and had a way more fantastic day out in nature, It as still a great day out in the forest, just a majorly hard pain in the butt work out. Don’t take a mountain bike up a jeep trail; I do not recommend this.

I woke up at dawn completely wide-awake and motivated to do a nice little mountain bike ride. The pup and I had mountain biked 12 miles the day before which is kind of a lot for her but she seemed to not be limping at all and to be very refreshed so I figured she had a good 8 miles in her for sure.

That was the plan as we started up the road to Holcomb Valley from near the bottom of Van Dusen Canyon. I wanted to check out N23 a little bit and take that farther than I normally do and then I figured we would just turn around and go back to the lake and relax and work on my handicapping for the week. That was the plan as we made our way up past Burnt Flat Road.

The trail was pretty easy and it was a beautiful nice cool morning, maybe just 50°. The pup and I were having a great mountain bike ride and the trail was not so hard so we just kept going farther and farther into the forest. The trail was heading up slowly and steadily but the altitude gain was not to bad and I figured we might get a nice view of Holcomb Valley way down below at some point.

Even with my weak mountain bike skills the gradual going uphill trail wasn’t to hard on my legs and it was just a gorgeous early fall morning in the forest. I didn’t really have to walk the bike a lot and I could actually ride almost the entire thing so I was feeling pretty good about myself about 5 miles in. That’s when I noticed that N23 turned into John Bull Trail. I clearly remember running John Bull Trail from the Western end about five years ago. I don’t remember making it very far up the trail and I figured this would be a really good loop to do and that John Bull would eventually take me back down to Holcomb Valley. When I first started up the trail I was thinking that it would probably be about 8 mile round-trip. 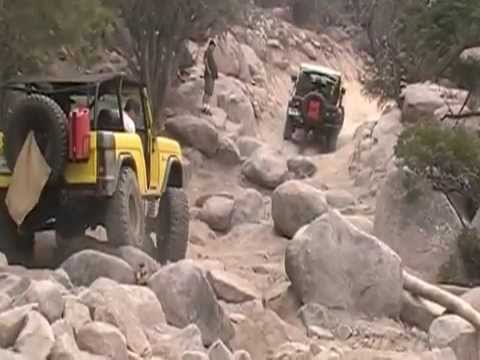 I was upbeat. Life was good, the forest was pretty, the pup was having fun; then the trail turned into an absolutely terrible Jeep trail ( maybe not so terrible if you are in a Jeep CJ with lockers but pretty terrible when you’re dragging a mountain bike up and over boulders the size of your mountain bike ) I was so high up on the ridge line, I was high above Holcomb Valley and even the Holcomb Valley Pinnacles I figured I had to be at the top of the mountain, right?

So I just kept going.

The trail got worse and worse, there was no improvement at all and for 2 miles straight I think I was pulling my bike almost straight uphill over these giant intense boulders in the full sun. It no longer felt like 50°. It felt like 90° and like I was an oven in the middle of the desert.

Oh and also I was almost out of cell service battery. I was trying to constantly look at my map to see if the trail did indeed go back down to Holcomb Valley or if I should turn around and go back down the terrible jeep trail and all the boulders. If I was hiking this would’ve been an easy choice. I would’ve just gone back down the trail but as hard as it was to drag my mountain bike up over the boulders I knew that going back down it would be even worse. I kept trying to look at Google maps and it was so frustrating as I had four bars and no cell phone reception #VerizonWhatAFuckingJoke #VerizonOhYouWantToInternetWithYourSmartPhone?

But enough about how my #verizonphoneiscompletelyuseless

I had bigger problems. Like the fact that even though I had full cell phone coverage I couldn’t  make a call or use my internet to check maps or google John Bull Trail to get any information.

I managed to get a text out to my neighbor, a retired forest ranger, finally, asking him if my memory was actually correct, and if this trail did actually go all the way back down to Holcomb Valley. Luckily as I sat on the top of the ridge line enjoying the view over Holcomb Valley and kind of wondering how on earth I would get back down there my neighbor responded with an answer, that yes John Bull Trail did go through.

It was almost 10 o’clock at this point and I had been on the mountain bike and scrambling over boulders for almost 2 hours at this point. My little dog was getting tired but I knew that once we got back down to Holcomb Valley where the trail came out at Arctic Canyon it would be 95% all downhill to get back to the car and once I got back to Holcomb Valley it was only 3 miles to the car. It would really not be that bad at all.

My neighbor told me that if I just kept going down the way I was headed towards the west on John Bull Trail I would eventually hit 2n10 and Arctic Canyon Road.  I got back on the bike and started pedaling in what I hoped was the correct direction but I just felt like I was going farther and farther to the north and although everything in me told me that this trail is going to take me back down to Holcomb Valley I just had a really bad feeling that I was going to end up on the opposite side of the mountain down in Lucerne Valley and have to end up asking someone to come 45 miles out-of-the-way to pick me up. I guess I must have been completely mixed up about where east, west, north and south were because I felt like I had to have been going in such the wrong direction and plus I had been going downhill for so long I felt like I must be halfway to the high desert by now. Finally after three hours of riding I saw something familiar up ahead and then I had a memory flash through my head of running this trail five years ago and driving by some old gold miners ( yes we actually have a gold miners Association up here in Big Bear Lake  and they dress up like gold miners and they go panning for gold.)

Well I can recall these particular gold miners laughing at me and scoffing at me for running John Bull Trail in the first place. Now I know why. It’s a terrible hard trail and I need a jacuzzi with Epsom salts.

What the Hell is that Smell? A hike to Mammoth Rock