When we had arrived in Anchorage a week earlier we had looked like the poster children from sunny southern California, our tans, white teeth and sandals clearly making us stand out amide the sweat pants, and work boots of the locals. Now after spending three days in the bush, well we definitely smelled like locals. Steven and Ryan had a weeks worth of Alaska facial hair making them blend in; my facial hair was still under control at this point.
Our clothes were dirty and smudged with bug juice, our hair was messy and greasy, we could not wait to check into our hotel in Fairbanks and wash the Alaska off of us. But of course driving into town we saw a Fred Meyers and had to stop for paninis.
Everyone else in Alaska went out in public like this, right?
It was 2003, After three days of camping in Denali National Park we drove straight up the Parks Highway to Fairbanks.  Once we left the park, and the rain shadow that surrounds Mt McKinley, the rain and fog lifted and we were back under sunny skies. As we loaded all our gear and our dirty bodies into the little compact car we realized three days of not showering had left us very stinky. Our poor rental car was going to need to be detailed when we retuned it. Not only did it smell like armpits and deet, but there were dead mosquito’s crushed on every surface. That was on the inside. The outside had a fine coat of dead bug on every inch of paint. Finally a day of  sunshine,  made the coat of dead insects glisten in the sunlight.
As soon as we stepped out of the car in Fairbanks we noticed that there were no bugs! What a relief! It was nice to be outside without constantly swatting at yourself!
We quickly inhaled our fix at Fred Meyers then checked into our hotel, a small budget kind of place. In any other town it may have been kind of cheap but in our Alaskan adventure it was perfect for traveling on a budget. We felt like we totally fit in with other like minded travelers our age back packing and hitch hiking their way across the great state of Alaska.

We had chosen to be in Fairbanks for the Summer Solstice in the end of June, the longest day of the year. We were planning to drive up the Dalton Highway on the night of the Solstice to the Arctic Circle over 150 miles miles north of Fairbanks. The Dalton Highway is a dirt road that is extremely desolate and definitely not supposed to have rental cars driven on it.  It ends in Dead Horse, Alaska over 400 miles away from Fairbanks. We would only be going over 70 miles on the unpaved gravel part of the road; the dangerous and not maintained part. 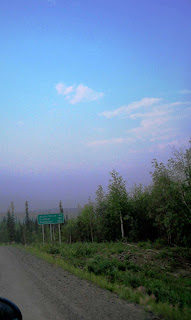 The Haul  Road has mainly truck traffic of the eighteen wheeler kind, and they drive fast; eighty miles an hour.
Little cars like ours just try to stay out of the way. The trucks need to accelerate to make it up the big hills, so you try to get the hell out of their way and hope they don’t break your windshield with flying rocks and gravel.  The road also has major dips in the dirt from the perma frost  in the long Alaska winters. These dips are like driving into a huge pothole. You have to watch for them or they can take out all four tires at once. 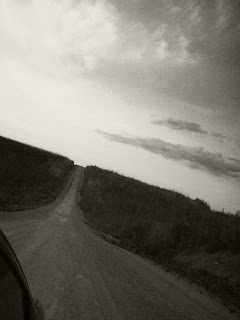 This is a quote from the Dalton Highway website
” Most rental companies will not allow you to drive their cars on the Dalton. Trucks speeding along the slippery gravel track kick up thick clouds of dust or mud, reducing visibility to absolute zero; potholes take a heavy toll on cars and services, gas, and repairs are practically nonexistent. Don’t even consider driving the Dalton unless you have 4-wheel drive, a CB radio, extra fuel, food, tires, and a trunk filled with supplies. This is grizzly country, so when camping, keep a clean campsite, storing food at least a quarter mile from where you sleep.”
We did not have a four wheel drive. We didn’t have CB radios. We did have cell phones that barely had service in Fairbanks! We didn’t bring extra food, tires or fuel. All we had were a few leftover Panini crusts and maybe a bottle of water rolling around under a seat. We were extremely unprepared to drive the Haul Road and I would never do it again with out carrying all of those supplies. Up until 1995 you needed a permit to even drive the Haul Road, its that dangerous.
At least they have little red flags by most of the dips to warn you. 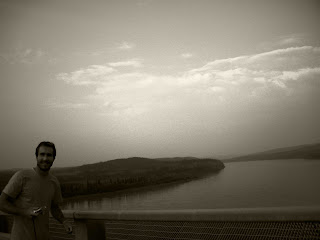 After a day of relaxing in Fairbanks and checking out the Solstice Festival we set out in the evening for the Arctic Circle. The road was completely empty leaving Fairbanks. Once we got out of town, it was very green and pretty. The boys really had to pee so we stopped at a turnout outside of town. You know how I said there were no bugs in Fairbanks? Well once we approached the far north and left the interior of Alaska the bugs were the worse we had ever seen. The North Slope not only has mosquito’s the size of your head but biting black flies. The poor boys had a very hard time peeing in nature. Jenny and I felt really bad for them.
I mean through our laughing we did.  Once they jumped back in the car we tried to smash all the bugs that had followed them into the upholstery of the car and continued up the Highway.
Past Fairbanks the road v’s at the junction to Manly Springs. We turned off towards the Dalton Highway, our adventure in the far north began.