This mornings run was going to be a quicky. 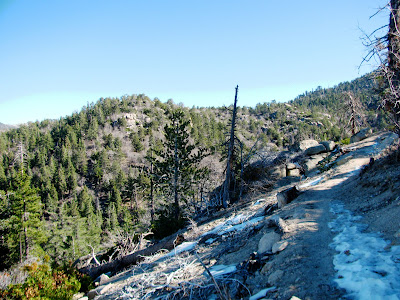 I had an hour. 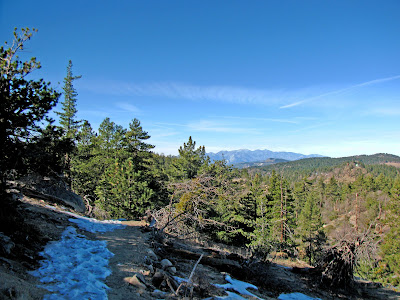 Tired of running the same trails in my neighborhood I took off for Exploration Trail at Keller’s Peak. Keller’s is the place to run in the winter months.   The road is closed to vehicle’s and it’s only dog walkers, nature lover’s and joggers. Exploration Trail starts near the bottom of Keller’s Peak road and winds up through the mountains and ends farther up Keller’s Peak road at the intersection of Children’s Forest. Now for some reason I had in my head that Exploration Trail was only three miles at the most to the top. Ha. Was I wrong.
As I started my run, the trail was super slick and very icy in spots. The parts of the trail that still had snow on it had packed down icy snow. This must be a popular snow play area at the bottom as its so close to the highway.
Icy trail meant I had to walk way more then I would have liked to. It was a real pain in the ass and and I decided that I would run the three miles up to the road and then run Keller’s Peak Road back, hoping to avoid the icy trails.
So I started running and running and running, I mean where I could. I ran the parts that were not icy slippery falling down the ridge, death! I guess this walking slash running has a name. Its called fartlets. Giggle giggle. I knew I was meant to be a runner! I am awesome at fartlets!

I had a nice little laugh as I fartleted my way up the trail. That may or may not be a word.
The Exploration Trail turns out is nine miles round trip. 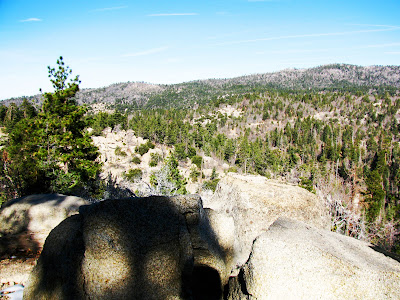 Crap.
Of course I was unaware of this. For some reason I just had it in my head that it was around three miles to the top of the trail and the road. I had hiked about a mile of this trail before so I knew a little bit what to expect.
The Exploration trail has over a thousand feet of elevation gain as you run through an ever changing forest made up of pine and oak trees. This trail ascends the Northern part of Keller’s Peak. Keller has to summits both at over 7,800, Keller’s Peak and Slide Peak. Keller’s Peak is well known for the B-62 bomber that crashed here during World War Two. I have heard you can still easily find the crash sight and debris near the summit of the North Slope.  There is a asphalt road that runs through this area of the forest up to the fire look out tower at the top of Keller’s Peak Road, and also Children’s Forest, a cool little park area. 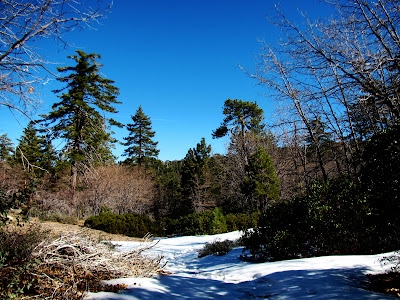 As I ran through the empty forest the forest began to change from a pine forest with Jeffrey pines, black pines and cedar trees to an oak forest. Instead of huge pine cones to vault over, I was running through fields of crisp dried leaves. And snow. Lots and lots of snow. At the lower elevation the snow was a packed down icy mess and I was annoyed as I slid up the icy trail. As I found myself miles down the trail the foot prints and signs of snow play thinned out and I found myself running through two feet of snow in places. In shorts. This was a sixty degree mountain day in January. You have got to love Southern California, right? So I had to wear shorts. It seemed like a good idea when I was walking out my front door into the warm winter sun light. Less of a good idea when you’re jogging through two feet of snow and getting a rash all over your lower legs from the icy course snow. Yet I just kept running. I mean I had to be at the top soon, right? As I made my way to the top of one of the little mountains, I was met with one of the most gorgeous views I have ever seen in our mountains. I was high above the pine forest at this point and from this vantage point I could look all the way across the pine forest to the ridge across from me. Interesting that I did not see town, the highway, or Keller’s Peak Road. Where the f was I? And If I was going to cross the road in a mile or so, where was the damn road? I leaned against some big ass boulders and contemplated this. Then I just started running up and up and up the trail again. The road had to be up here somewhere, right? Oh yeah, and my GPS on my phone was not exactly working. I’ve run at Keller’s lots of time’s and I know I have cell service here. I was getting frustrated as I kept trying to look at the map on my phone to see how close to the road I was and the road was no where to be seen on the grid. I felt like I had run my way into the mountain twilight zone! 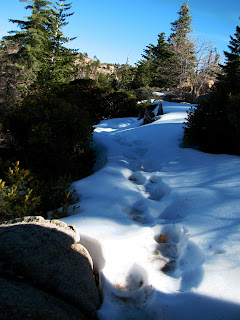 Now I knew that where Exploration Trail met the road there was manzanita growing every where, so as I ran out of the oak area of the forest I was waiting and waiting for the manzanita to appear. Yet all I saw were fields of Buck’s Brush, some more big ass boulders and more and more snow. Where was I? Alaska?I sneaked a peak at my GPS and realized I had been running for almost four mile’s at this point. And my running shoes had been soaking wet for about two miles of that. I could feel my feet swishing wet with every step I took. At least there were no blisters yet. Yea. Especially as I was so many miles from the car. One last angry glance at the GPS and I gave up. It was 11:45 and I was suppose to be at my boy friend’s house down the hill at one. I did not mean to run for hours and hours, but what an amazing workout! The only problem was as I made my way back down the mountain I found myself way more exhausted then I expected to be. Running down the mountain was suppose to be the easy part, right? I was so frustrated running back. I tried to enjoy this truly gorgeous day in the surprisingly warm winter forest but all I could think about was how badly I wanted to go home and look at a map! I started to wish I would run into another human being on this deserted trail so I could ask where I was. Well, there was one way to make a crowd of people show up.
I had to pee in the forest. You see, the second I take off my pants in the forest, whip out my white, white ass, and probably pee in either poison oak, stinging nettle, an ants nest or a combination of the three, a crowd of school children or possibly a bus full of Korean tourist will unload around the corner. I was running the trails by my house yesterday, trails where I have not run into a person in years. I decide to have a pee in the forest and just as I get my pants back on, I have a friendly black lab in my face and then a super hot fire fighter runs around the corner.
My system work’s.
Well kind of.
I accomplished peeing in nature without any visible rashes or bug bites showing up right away. I had my pants resecurred and I was running quite slowly back down the trail. Oh yeah, did I mention I was exhausted, and starving at this point? I was so wishing I had thrown some Cliff Gu or glucose tabs in my pack I was fading fast. The run down the mountain should have been easy. I was thinking about all of this when I ran around the corner and almost smack into a pit bull puppy, owner a few steps behind. See, my peeing trick works! So I stopped to talk to this lady who was also out running the trail. I realized I actually knew her through a friend of a friend and we had a great talk about Exploration Trail and how it is eight miles to the top! Good thing I turned around! Or that’s what I gathered from our conversation. Looking at a map now, I realize she must have been saying it was eight miles round trip and I was almost to the top! Grr.
So tomorrow before work, all I want to do is go back and make it to the top! Also, the nice blond lady told me that there is actually a short cut you can take through camp site seven, and I might try that in the spring, when the road is open to car traffic.  It was so nice to finally complete the run at almost eight miles and go home to a big bowl of berries and granola!