By Amber Woodyard on Thursday, February 28, 2013
I keep saying that this year I want to snow shoe to the top of Craft’s Peak.
Today I realized that will never happen.
There is an easy way to get to Craft’s Peak in the Spring and Summer months.
You can drive Snowline Road most of the way in and than I do a six mile loop of a run to the summit.
It’s not that easy but it is not agonizing either.
Today’s hike/ run was agonizing.
Even worse, I gave up a mile from the summit, exhausted sweaty and hating myself.
I went the hard way, parking by the radio tower and going up the dirt road and than following the ridge lines above Highway 18 so far below me.
It is a truly epic beautiful hike/ run. I did run the first two miles maybe.
After that the trail was mainly straight up in  spots.
I was stopping every few minutes to rest and guzzle the little bit of water I had left.
The first time I did this hike, the Rim Nordic approach to Craft’s Peak, I said it was one of the hardest hikes I had ever done.
I was not running at the time, and was in way worse shape than I am now.
We also got way lost in the forest and ended up hiking about ten miles that day, going up and over the same mountains twice, lost on the animal trails.
We did eventually make it to the top and it was a glorious sight.
I did not make it that far today and I hate myself for it.
Still, it was an epically hard workout.
Only 5.5 miles round trip but worth every drop of sweat. 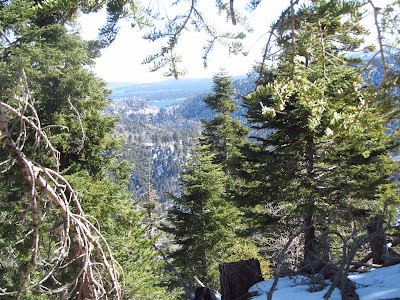