By Amber Wood on Monday, May 19, 2014
“Go eat a fish ass hole!”
Little did I know the furry masked bandit I was yelling at in the camp at three a.m. was the least of our problems as I wrestled the bag of tortilla chips away from him and headed back to my tent that had been slight warm ten minutes earlier.
It was in the twenties out side and I was not in the mood to argue with a giant raccoon bigger than both my house cats put together.
Two hours later I awoke still seeing my breathe in the Coleman tent to my friends aghast.
M had not locked her car the night before and a bear had opened the car doors and gone exploring in her car.
Apparently the raccoon joined his friend the bear in the car as we also saw his prints in the  back seat of the car.

This was what we awoke to on a freezing cold Sierras morning.
Yes it was 28 degrees in the morning every day of our Sierras vacation in Silver Lake, California. Silver Lake is near 7,000 feet in elevation and we might have left highs of 103 in Southern California behind us in the smoldering (early fire season) South Land three hundred miles behind us but it was still trying to be winterish hear in the high Sierras.
No joke, as I was whipping eggs for French toast in the morning, the eggs were freezing as I was whipping them.
It was that fucking cold! 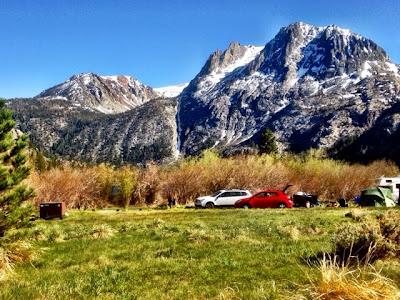 It might have been cold in the mornings but as we watched the sun creep across the long valley where our camp ground lay every morning, it was just so beautiful.
Every morning at eight a.m. the sun shine would finally reach our campsite 26 and in just a few minutes we were all warm and shedding layers and putting on shorts and ready to get started on our days of hiking.