I’ve hiked at City Creek Ranger Station quite a few times and I’m always amazed by how much, well, shit there is on the trail. Last time we did this run, Jenn commented
“Some one must have been walking their herd of huskies up here!” 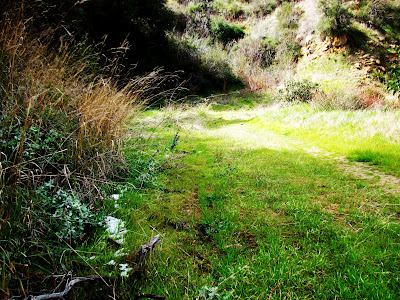 It’s a little annoying to have to dodge land mines while running five miles up hill and also keeping one eye out for any early season rattle snakes. What’s weird is the poop parade doesn’t start until half way up the mountain. Today I came to the realization that I think it’s actually large cat scat, not some hiker out walking his dog. 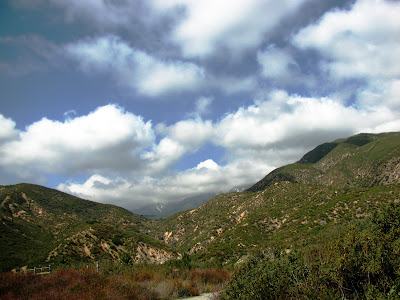 That means, in this Gorgous area I love to run in, there are probably a ton of large cats watching me. Now, I don’t know know if that means bob cat or cougar, but neither would be a wise choice to run into when I’m five miles from my car.
Yes, that’s right, today I ran ten miles, before I went to work for eight hours. I really had no intention to run that long. I meant to go about eight. I just started running up City Creek Road and I ran way father than I had ever been before. Legend has it that this road comes out on Highway 18 at the Arrowhead Hotel, and I had it as my goal in my mind that I would run from the Highway 330 to the Hotel. After four miles of running I came to the top of this hill and the road forked. One half of the road headed up and wrapped around a mountain side that was heading back towards my car. The other road was heading West, towards highway 18.

At this point I was cutting it close to my turn around time to make it to work, change out of my running clothes and inhale a snack real quick. But a new, unexplored trail beckoned me, so I sprinted down the mountainside towards the 18. A quick run down a suddenly much improved road, yes it was suddenly drive able again, took me to a great vantage point and I could see the hotel down below me!
It was easily still three miles away. Yes, that also means another three miles back. It looks like my dream to run from Highway 330 to the Highway 18 is not going to happen. I mean, unless I feel like running 18 miles in one day. Today’s run of ten miles was the most I have ever done. I actually felt really good afterwards and even during my run. I do need new running shoes (Already!) I discovered about seven miles in today that these shoes are falling apart, ow, on the heel. Besides that, I had the energy to keep going.
I blame that on the Jack 3D I took before work. Jack 3D is my newest supplement I am trying out for strenuous runs of seven miles ore more. Jack 3D has a ton of Creatine Mono hydrate in it, which is the kind of creatine you need to build lean muscle mass. Creatine  increases the levels of phosphocreatine in your bloodstream, which helps with the production of adenosine triphosphate, ATP. ATP is a high energy nucleotide, giving you the endurance to just keep going during a work out. Jack3D also has Beta  Alanine, which helps fight fatigue, a ton of caffeine, and  Dimethylamlamine HCI, or geranium flowers. This supplement keeps me going for about five hours nonstop, so it’s great for these long runs. 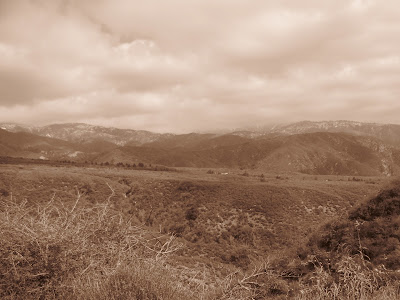 Today’s run convinced me that I think I could do a half marathon, of 13 miles. I’m going to start looking around and see if I can find one sometime this summer that I could add into my schedule.  What’s great, is I’m not even sore today after yesterdays heart pounding run!
Okay, it was heart pounding because I was almost late to work, had to change in my car on the side of the highway and was starving so I flung hand fulls of cereal and dried fruit at my mouth as I sped to work.
You see, once I realized that the road to the 18 was not doable today, I decided to spend my last twenty minutes of my run taking the other fork of the trail up that mountain. As I ran I started to see foot prints and mountain bike trails in the wet mud. I hadn’t seen any other foot prints, I mean besides deer, this entire run so far. This trail must come out some where in San Bernardino, I mused, wishing I had the time to take it to the end. I was actually doubling back to a vantage point where I could see my car, way way below me. That’s when I looked at my GPS and realized I had already run 5.5 miles! And I had to work in an hour and a half!
I love to run, but I ma so slow. It’s hard for me to run fast. Even when I try and run fast, I space out and forget and am soon back at my turtles pace. Today i ran faster than I ever have. I sprinted down about half of the trail going back. Luckily ninety nine percent of the road going back was down hill. My elevation gain today was well over 1,250. Pretty impressive for a quick run before work. The only wild life I saw today was a beautiful Cooper Hawk flying over me and a few bull frogs at one of the creek crossings. Kind of glad I didn’t run into the now legendary Cougars or Bob cats that must roma this canyon. I’m sure they see me. It was such a gorgeous day for a run. Even at the 2,000 foot altitude there was a ton of snow all around from the storm the other day. Up near Crestline the pine trees were still covered in a dusting of white. This was such a perfect before work run, I can’t wait to take my coworkers here!

I Used to be a Runner True Tales from a Nature Host