I would just like to say I’m pretty sure I do not and have never had the Coronavirus. But that being said my immune system has been broken since I got the flu from hell at Borough Market in the U.K. in January. I puked my way through Venice, walked the streets of Rome feeling like a dehydrated zombie, and days later flew back to the U.S. where I must have inhaled every germ at Los Angeles International Airport because before one could say, welcome home, two days after we returned to the U.S. I had a cold that seemed to last for most of a month. Oh and because I have asthma I was of course coughing through most of February after being sick. Being sick twice in one month with a cold, and then having a cough that would not go away was terrible but I am just so happy that all that was behind me in February. I feel like if I had that terrible cough in March people would mad dog me everywhere I went. So many people think I had the Coronavirus in February and I can say, I was not that sick, I did not have it. Especially with me having asthma, I’m pretty sure if I did have it I would have been very sick, not to mention, spreading it to everyone I know unknowingly.

Everyone and their mother really truly think whatever tiny little cold they had back in January was actually the Coronavirus. I don’t think I ever contacted COVID-19 in our Italy travels. Now that it is June and we have been self-isolating for months, all those little colds may be behind me but I have had the absolute allergies from hell mostly all of May. Thank God we stay home almost all the time because if the masses saw how many times a day I sneeze and blow my nose people would be just terrified of me.

It’s a completely different Coronavirus filled world we are living in here in June 2020. I keep thinking back to six months ago when we were swimming in the ocean in Goa, India and watching wild Langur monkeys in the jungles near Ooty. That feels like a different world. That was a world where I just hoped and prayed we would find a bathroom on our India road trip where I wouldn’t catch a terrible dirty potty disease and now, we live in a world where this pandemic is a real reality.  It honestly seems so unreal all the time. Yes, as I sit at home in our mountain town, I think all the time, man I would give anything to go back to those winter days road tripping around India with our family and stopping for breakfast puris just outside the Masinagudi jungle.

A month ago I drove to the city and stocked up on all the good foods from Trader Joe’s, Wholefoods and Sprouts. This caramelized onion cheese was one of the things I had been craving. In this crazy time that we are living in, we don’t leave our mountain town basically ever, so driving an hour off the mountain to go to Costco or Whole Foods is unheard of. When I can every month or two get to Whole Foods to buy my favorite raw cheddar or kale salad I’m just ecstatic. And then I can make these awesome stuffed cheesy bell peppers. 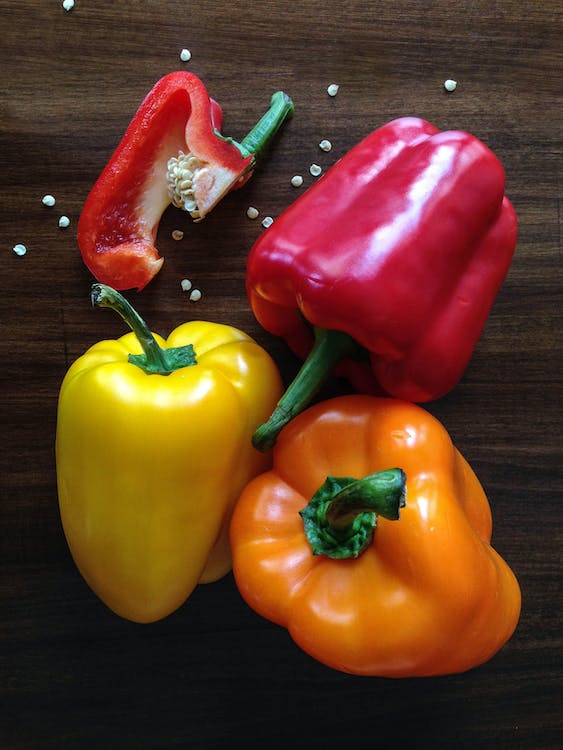 Broil the peppers in the broiler until slightly blackened. Set aside to cool.

In a saucepan heat the chili oil and fry the onions. Turn on your ovens fan as the chili oil may cause you to cough. Add the mushrooms and then the sirloin. Mix in the dinosaur kale after the meat is cooked and stir fry just a few minutes until the kale is cooked.

Preheat the oven to 375. Cut each pepper in half and stuff the halves with the sirloin mixture. Sprinkle the top with the caramelized onion cheese. Bake for 10-12 minutes until the cheese is slightly browned.