By Amber Wood on Monday, June 30, 2014
I think I see vultures circling
I’m laying flat across a giant boulder in the shade trying to soak in the granites cold ness and trying to not breath so fast, hyperventilate and pass out.
Some where on the switch backs above me I’m sure Jenn is doing the same thing.
I wonder if she will ever talk to me again after this hike. 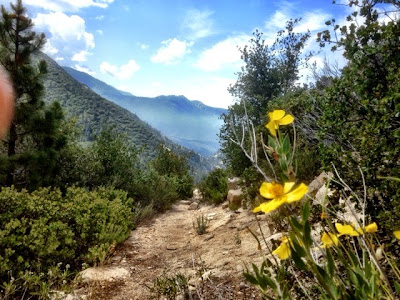 We hiked down to Bear Creek on the Camp Creek Trail for four miles to the bug infested creek below the manzanita and pine filled forest.
Today must be spring time by the hoards of bugs in the air, on my neck and in my sports bra.
This was suppose to he a cool breeze filled hike through a rainy forest.
As we drove towards the trail head down a dusty dirt road there were massive thunder heads in the sky above Big Bear.
The whole sky was black and grey.
Except over where we were hiking. 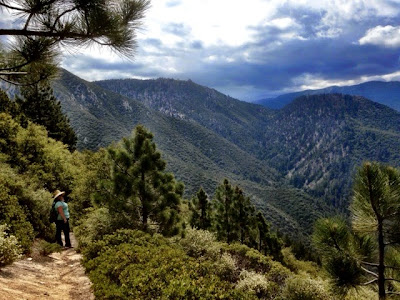 As we begun our way down the massive and steep switch backs I was already sweating and this was the easy part!
I kept looking at the dark clouds in the sky to the north praying they would make their way towards us as we dropped in elevation.
The trail was extremely steep in places ( Jenn asked a few times, shouldn’t there be ropes to hold into?) as we made our way out of the pine forest and climbed further into the chaparral.
We could hear the pounding waters of the creek miles before we could see it through the lush trees and shrubs that crowded the banks of Bear Creek.
In late May there were wildflowers in yellows and purples every where and the trail side had the bright red indian paint brush covering it’s edges. 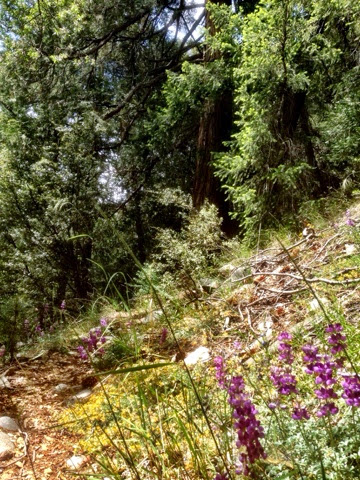 As we finally started to near the creek bed, I told Jen nonchalantly
“That is where the bear attack happened”
She thought I was joking of course.
I usually wait until after I’ve drug a friend two miles down a dusty trail in the miserable hot sun to admit a dude was chased by a bear here three years ago.
A mile from the creek bed his torn up and destroyed back pack and the remains of his camp litter the forest.
Jenn turned around on the trail a little before we hit the icy creek waters and the bugs went from a few to hordes of insects.
I splashed into the frigid snow run off, soaked my top and my buff I was wearing on my head, took a few shots and headed back up the trail.
We were running about an hour behind time wise which was okay as I ran up the trail constantly swatting at my face.
It felt like a cloud of nats, ants and spiders were trying to eat me.
Seriously the only other time I have seen bugs this bad was in Alaska a few years back. 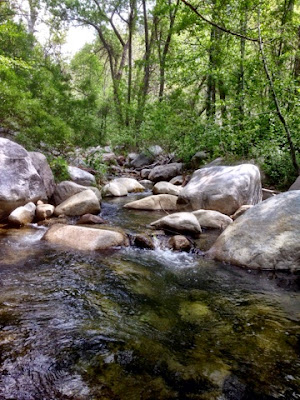 I put my buff over my face burka like but that was miserable; it was so hot and sweaty I felt like my whole face was just drenched in sweat. ( and now the smashed smelly ants and bugs were smashed into my skin)
Yeah, it was gross.
I had to sit down twice so I wouldn’t pass out.
When we finished the hike hours later I saw that we did over 2,600 feet of altitude gain in the hot sun.
Finally about two miles from the car the sun finally, mercifully hid behind the clouds.
The Bear Creek hike is so tough Jenn said she lost eight pounds on the hike today! ( and she also puked when she got home!)
But it was worth it; so beautiful!
Bear Creek bugs hiking insects
0
Previous Post
Next Post