When camping in the high sierras breakfast tacos are a must in the morning. They are especially needed after the bears ransack your campground the night before!

Day three of camping in the high Sierras we woke up to discover the bears had feasted the night before.

I had told my friends specifically, yes there  are bears in this area but no one chose to believe me. It’s really frustrating when you are camping with people who camp all the time and still they don’t listen to you when you tell them to be bear savvy!

Our camp ground had bear bins and the sad thing is, they were mostly empty as my friends left the coolers, camp stoves and coffee makers out all night! After a few margaritas I gave up trying to explain how ruthless the bears are when it comes to margarita mix and tasty snacks like tortilla chips and put my personal cooler in the bear bin and went to bed. That is how I found myself making these tasty breakfast tacos for everyone in our group in the a.m. hours at Silver Lake on a morning so chilly that the eggs were freezing even as I whisked them up!

As I cooked the chorizo up in a frying pan over a campfire I mused, thank god the bears did not chew up the coffee maker. We stayed up late Thursday evening, snuggling around the camp fire. The night before the temperature had dipped into the twenties near the lake and we woke up to frozen beer in frosty bottles and coconut oil that was frozen completely solid in the chilly mountain night. None of us were looking forward to another twenty degree night in a cold tent but finally we pried ourselves away from the fire and bottles of white wine and card games to go to bed.

I put my cooler in the bear bin first and warned my friends to do the same. It was some time later that the bears came. Those bears had a real good time in our camp site.

It was windy all Thursday night and I did not hear a thing aside from my tent sounding like it was trying to take flight.

I’m kind of glad that none of our friends heard the bears come through our camp ground as every one with me brought guns and bears, fire arms and drinking all night really do not mix.

All I heard all night was that damn wind and my tent flapping in it.

I didn’t hear the bears drink our neighbors mixed drinks.

I did not hear them scurry through our camp ground drunk and eat Ryan’s wine and garlic marinated chicken.

I didn’t hear them destroy the butter I was going to use for croissant cinnamon rolls in the a.m.

After the bears were fat happy and drunk, well they were apparently dehydrated.

They opened up Ryan’s cooler and some how got the tops off all Jen’s Gatorade bottles. They did this nice and neat, not even a tooth mark.

Than the damn drunk bears drank all their Gatorade.

Then they tore apart their coconut water.

Once they were fully refilled on electrolytes on they went down the road to the next camp site, leaving trash and destruction in their wake.

Because all my buddies food was destroyed in the raid we would be having these delicious breakfast tacos for breakfast and not the Croissant Cinnamon Rolls.

Next time maybe my buddies will listen to me? 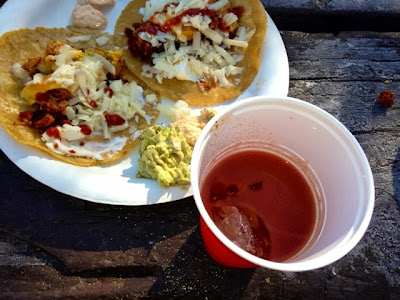 In a sauce pan cook the chorizo with the onion.
Chop the bell pepper and add that to the mix.
Mix the sour cream and the hot sauce. Scramble the eggs into the chorizo.
Fry the tortillas in the coconut oil to make taco shells.
To assemble the tacos put the chorizo eggs in a taco shell, top with the spicy sour cream and both cheese.
Serve with Bloody Mary’s.