This one time, some where in Brittan, a passport agent yelled at me “Take off that ridiculous hat!”
And it began; my love affair with hats so crazy that they inspired anger in government officials.
I had bought the wool hat a few days prior in our shopping excursion to Nottinghill. It was a warm wool winters hat. It was a cold winter in England, and this being my first trip abroad I had no idea one must remove all cute head accessories while entering passport control.
As all my friends stood behind me giggling at the fiery tea fueled rage one hat could inspire in that British man, a fashion trend was born. I buy a lot of ridiculous hats. It’s what I do. And I wear them in public.
How can it be, then, that I do not have one hat ridiculous enough to wear to the Renaissance Faire? Land of all that is ridiculous? (As in chain mail dresses) I feel like such a fashion failure as my head will go naked, sans a head band today, and hopefully the suns rays will not lighten my dark, dark hair anymore. 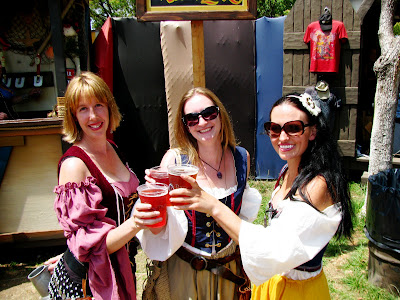 I stopped at my aunt and uncle’s yesterday morning to pick up the family Renaissance Faire costumes and discovered this fashion trend runs in the family. My uncle also has a ridiculous hat too.
My Uncle Larry’s hat is made of an old rainbow umbrella attached to a ball cap. It is nothing short of awesome! This hat will surely be a family heirloom handed down generation to generation; it’s just so cool!
Alas, hat free, I made my way down the mountain and through the Inland Empire towards Los Angeles and the Renaissance Faire. I love pumping gas in Pomona in a tight boob enhancing bodice and many many skirts, while homies drive past me pointing. This is how we roll in my ‘hood, bitches! 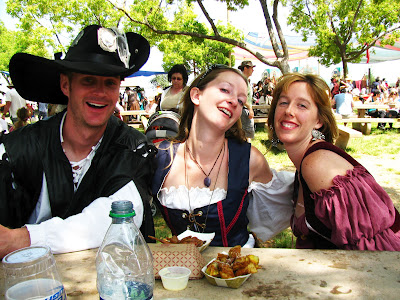 I met my pals in the Trader Joe’s San Dimas parking lot and we proceeded to continue to change into costumes in the parking lot while customers watched (If your going to strip down and then redress in 1600 century garb, wouldn’t the TJ’s parking lot be THE place to do it?
Once redressed in almost period costumes, it was off to the faire three miles away in Irwindale.  It was time for some amazing food, some honey wine and good times with friends. 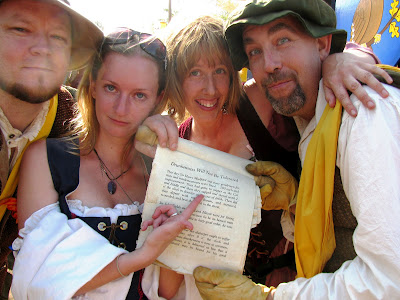 The best part of faire, I mean besides having creepy old men lear at you and for the boys, BOOBS BOOBS BOOOOOOBBBSS is the glorious food and beverages. Mead, or honey wine is pure deliciousness. This year we tried it in raspberry and it was crisp, cool and refreshing.
I was delighted to see one of my favorite beers, Hoegarden, on tap and I chose to stick with that. 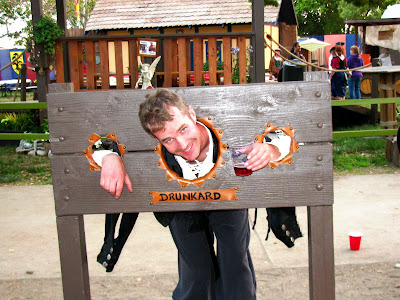 The one thing you simply must eat at faire is a turkey leg. And you must take a picture of yourself biting into it. The same could be said for the giant crisp pickles that are sold at faire. They are refreshing on a hot day. I wanted to try the smoked pork chop, but with so many choices, I couldn’t try everything, so I went for the pulled pork instead. This made me realize I need to make pulled pork again some time soon.  We also had some friend artichokes which were ridiculous good and I realized that I’m sure I can make these at home, and I just might this week. 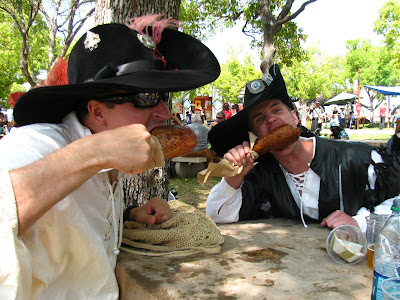 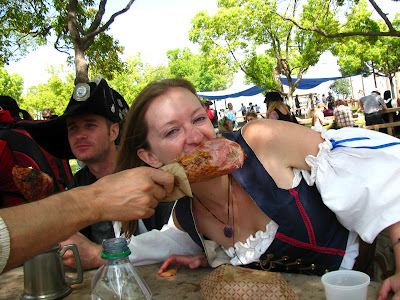 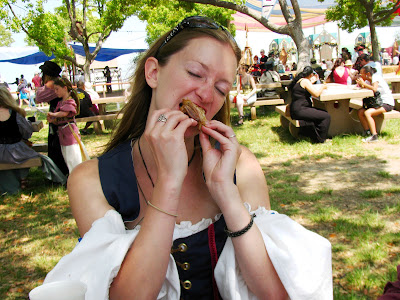 The girls had a great time shooting bow and arrows… and the boys had a good time… well… looking at boobs! boobs! boooobbbss! And drinking beer. Does life really get better then a day of costumes, beer, mead good food and awesome friends in the glorious sunshine? 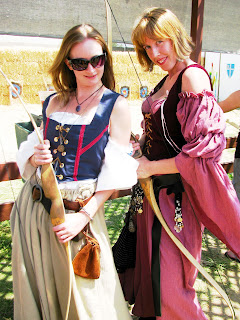 I say glorious sunshine, as yesterday was a disgusting almost one hundred degrees and humid, but luckily today dawned slightly overcast and when we arrived at Faire it was only eighty. Which was awesome as I laced up my whole bodice, then realize I forgot deodorant. Looks like I’m going to smell like the Renaissance Faire today! 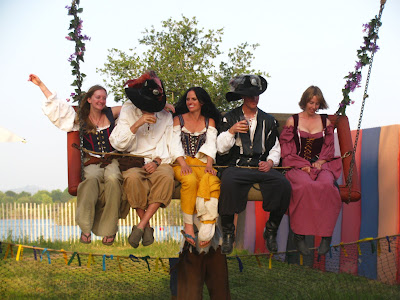 After we drank beer then played with sharp shooty things (bow and arrows) we went on the giant swing (the one “ride” at the Renaissance Faire) So much better than a Ferris wheel any day! Because you can bring beverages on a giant swing!
The sun was setting into the Los Angeles skyline to the west; Renaissance Faire was coming to a close.  If we had been on a hillside we would have been able to see the outline of down town Los Angeles in the distance. As the sun set into the Pacific Ocean we said good bye to Ye Olde Renaissance Faire and with that Scotty J carried a surly wench into off into the sunset.. 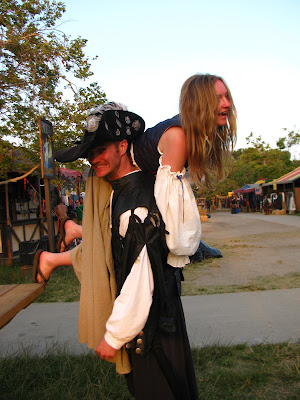