Bear Creek Made me her Bitch Again

By Amber Wood on Thursday, November 29, 2012
I told myself I would never attempt Bear Creek again, so how did I find myself running the Bear Creek Trail on a fall morning?
Boredom I guess. I get so bored running the same trails daily. Yesterday I ran eleven miles easy so I figured I could handle the 1,800 foot ascent to Bear Creek.
Okay well, I made it 1,800 feet down the pretty trail. After that the trail was very over grown and I just kept thinking about how I had to run back up this massive trail to my car.
Even with the first few steps up hill, I just wanted to hold my head and gasp
“What have I done!?”
This trail run was in all just over five miles but it was so exhausting coming back up the trail head I actually had to stop and take two breaks.

I never take breaks, ever.
When I began this run it was twenty nine degrees at my cabin. Beautiful weather to go for a run. I thought it might warm up a bit once I got on the mountainside with little tree cover and with a rapidly ascending elevation into the warmer valley below.
Thank god I wore shorts under my sweats. When I ripped off my sweats about nine A.M. I was still running in snow down this narrow trail that hugged a rocky mountainside.
I spent the rest of that run shoveling handfuls of snow into my sports bra.
It was sixty degrees outside and I was burning up.
I was cursing the sixty degree weather as I was rubbing snow all over my bare arms by the handful.
That run was such a strenuous workout but I made it back in one piece, yea.
I did not run into the aggressive bear who prowls this area and who left fresh tracks in the snow that morning.
Yes, I know what a bear track looks like now!
That is my new skill I picked up recently. I used to have a hard time seeing and identifying bear tracks but I’ve become more skilled at this recently.
I’ve seen a few fresh bear tracks this week.
Shouldn’t they be hibernating already? 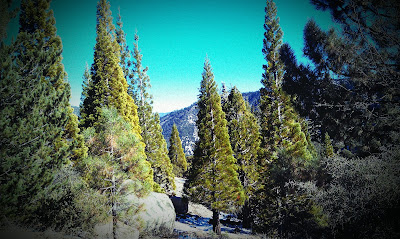 At the very end of my run, I came upon this secluded grove of Sequoias. 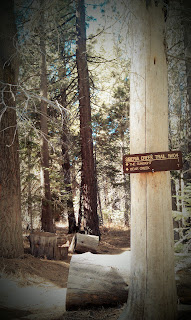 Pretty cool, as you hardly see them in our area. They are not indiginous to this area. This grove must have been planted by some one. Sequoias are such trees. Their tiny needles are a very bright almost neon green. Our maybe I was just high off adrenaline at this point in my run.
There is another trail that ascends to Bear Creek via Siberia Creek and Glory Ridge or you can go through Bluff Lake via Siberia Creek. Both of those trails, I’ve heard are about seven miles one way and just as hard. I’m planning on doing part of each of them at some point this winter, when the weather cools down to the forties.