I think I got the travel bug with my first trip to Mexico. That first amazing warm corn tortilla and cabbage filled fish taco had me hooked. It was a long and adventurous road from my first fish taco to beans on toast in the U.K.

The first time I stood on a sandy beach in the early morning chill and gazed at the Pacific Ocean from a foreign country I felt it. I traveled to Mexico maybe eight times when I was between eighteen and twenty five. Every trip was an adventure. Back then you didn’t need a passport to go across the border. You just needed a reliable car full of American fuel and some money in your pocket. My first trip to Europe I would need a little more cash and a passport.

I was very lucky when I was in my early twenties that my best friend, Mimi, was living in Mildenhall, England for four years. This meant traveling to Europe was very easy when I had a free place to stay.

I am very lucky to not get jet-lagged so I awoke from my first night of sleep in Europe refreshed and ready for the first official day of my two week holiday. My other BFF Ryan was flying out to meet us at Heathrow my first full day in the U.K. He lives in Pismo Beach, so he flew up via San Fran. Ryan met Mimi and I one cold morning in the international terminal of Heathrow airport. Because he stayed in a place like the voco hotel near Heathrow airport, there was no issue with Ryan meeting me and Mimi, especially as the hotel was pretty close. I think it was 2006. It was definitely winter. Britain is way colder then sunny So Cal. I love the cold, I didn’t mind at all.

At the time Mimi and her husband John were living in Mildenhall, which is over an hour North of London. It takes awhile to commute to London from the outskirts. Motorways in England are all kind of based on roundabouts. You have to drive around everything to get from point a to point b. The M25, the main highway, goes in a circle around London, and you have to pay a steep toll to go into central London or just take the tube, way easier. All the motorways in this area of Britain come out of the M25 like tentacles, and to go between them you mainly take country highways and roads. It’s very convoluted. Motorways in Britain are just ridiculous. If there is an accident they close the whole road all day.
And then you wait.
Mildenhall is kind of what Mimi describes as white trash hick England. She makes it sound like the Arkansas of Britain. My first impression of England? Cold, overcast, but green everywhere, kind of pretty as we sped along the motorway. Mildenhall is the town that hosts the air force bass that John worked at. It’s about twenty minutes from the college town of Cambridge, which is where all their friends live and has pubs, shops, a huge Marks and Spencer’s, clubs, a movie theater and just way more to do than Mildenhall. Mildenhall was to me, a tourist who doesn’t live there cute and quaint. We passed a exceptionally old church. Mimi told me,
“That’s the oldest building you have ever seen,” Wow.

Luckily for Ryan and I we were not jet lagged at all. We went back, unpacked and headed out to Cambridge to go to our first pub.

Welcome to England! My first experience at a English pub I’d like to say I ordered a Guinness but I prefer a lighter beer that is not a meal itself. So I ordered a Pimm’s. Its like the wine cooler of England, a fruity girly malt beverage. I think I prefer England’s “Frisky Bison” apple juice and vodka. I ordered a lamb burger to go with my Pimm’s. I normally really like lamb but in England they cook all the meat with beer and I didn’t really care for it. My burger was extremely dry also, and I like my meat still bleeding. So my first pub food experience was not so good but it was just so nice to be with my two best friends in the world, we could have been at a carrot buffet and I wouldn’t care! (I hate carrots.)

The next morning we got up and headed out for a real British breakfast. We went to a pub of course. This was 2006 (I think) and you could still smoke EVERYWHERE in Europe, so part of our breakfast consisted of the taste of everyone else in Mildenhall’s Cigarettes. Gross. It’s amazing to walk into this pub at nine a.m. and a bunch of old men are at the bar drinking pints. It makes you feel like you’re in another world; A world full of nicotine and old man smell. This was the perfect place for a traditional English breakfast, I mean beans on toast of course. The first time I tried beans on toast I was hooked. A Traditional English Breakfast consists of fried toast, fried eggs, a side of Heinz beans, English sausage, English bacon, tea of course and a fried tomato. It’s amazing! How can it not be with all that grease? I have been eating beans on toast ever since! Okay maybe I cook the toast in coconut oil and use whole grain bread. English sausage and bacon weren’t really my thing. The bacon is more like ham and the sausage has kind of a bread crumb like filling. I mean its okay, I would eat it again but I like my meat products… Porkier? Is that a word? After our delicious artery clogging breakfast we hit the road to check out nearby New Market.

In New Market the horse is the King, the Thoroughbred that is. New Market is the racing capitol of Britain. Everywhere you go you see beautiful horse flesh galloping in the crisp winter dew. As Mimi explained as we waited for a group of horses to pass across the road

“Horses have the right away here” On a future trip to Europe we would spend an afternoon checking out the National Horse Racing Museum. The best part was they had a horse and jockey simulator you could ride for two minutes. This is how long it takes for the Kentucky Derby to be run. Wow, it was really hard to stay on that fake horse for two minutes. It doesn’t seem like it would be, but my muscles hurt for days after that! Props to jockeys, I don’t know how those little guys do it!
As the afternoon continued we made our way back to Cambridge, checking out the local market in downtown Cambridge and exploring Cambridge University and beautiful old King’s College. The old buildings were really astonishing, so different from all the new architecture we see in the States. This was just a taste of all the amazing sights we would see the next day when we ventured into London for the day. Of course we picked up some scones and clotted cream at Marks and Spencer’s for an early morning breakfast. So, now I’ve seen a lot of what England has to offer, but next time I’d like to visit Ireland, Scotland and Wales too. I’ve heard that the dublintourcompany.com provide a great trip around the former so that will be first on my list. Goodbye to the UK for now. 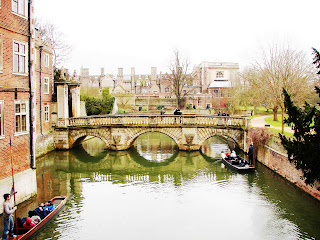 Two things to discover if you ever make it to the U.K.
1. Scones with Clotted cream: You can’t get clotted cream like this in the states, it’s so good, and the scones are plain, but dotted with sultanas. I don’t even like raisins, but they are amazing.
2. Marks and Spencer’s: I love this little shop! Every snack able little treat you could ever imagine! They have every ethnic snack and salad you could ever want! Plus they have these Ploughman’s sandwiches that’s mainly just cheese and meat with a savory chutney, but man they are amazing.
An Adventure California Version corn tortilla English Breakfast Mexico travel bug
1
Previous Post
Next Post