Another Summer Day Where the Turf meets the Surf

By Amber Wood on Saturday, August 10, 2013
Yesterday I was almost hit by a train as I sprinted across a rock strewn track towards the sandy cliffs over looking the Pacific Ocean. This was the most running I have done in days, plus I had a heavy pack on my back and it completely threw off my center of gravity as I pulled my self up the cliff side by some loose roots.  My ankle has been hurting and exercising has not been a priority. I felt like such a wuss as I ran as fast as I could across the, I hoped, abandoned tracks before the trains whizzed by.
An hour after that I heart pounding adventure I watched as muscular horse rushed by my face at thirty miles an hour, the sand flying back at me as the sounds of their hooves thundered by.
Does my day off sound like a scene from Indiana Jones?
It’s not. It’s just a typical Friday in my life.
God I love my life.
Yesterday morning Janette and made a little mini road trip top Del Mar, where the turf meets the surf. We were prepared for a day of beach time, horse racing and the highlight of the day would be a free concert of the Los Angeles based band, Fitz and the Tantrums. We were also planning to eat a lot of delicious food. Sounds like an amazing start to my weekend.
When we left the Inland Empire for Del Mar the weather was slightly rainy and thunder heads had been building all morning. It was an absolutely beautiful day in Southern California. We really don’t get a lot of days like this in the Inland Empire. It’s very deserty and hot here and we see more dirty brown smog in the sky than actual clouds. Southern California feels like Colorado (But with palm trees) on days like this.
Our mini road trip was going great until we reached wine country, Temecula.
The traffic came to a complete stop on the 15 freeway to San Diego County. Luckily I had Janette as my navigator and we ended up detouring through the hills of Temecula, past horse farms and vineyards, eventually taking old historic Highway 395 for a few miles. This was such a beautiful drive through wine country in an area I had never really explored before and I had a great time driving my Subaru like a Subaru (While Janette tried not to puke) through the twists and turns of the Temecula hills.
This little detour through the grape vines put us a little behind time wise so by the time we approached Del Mar and saw the glorious Whole Foods in the distance we were starving. We were completely over whelmed when we walked in the doors of Whole Foods and bought a little bit of every thing…
Sushi! (Jalapeno Crunchy Dragon Roll)
Pulled pork belly! (With hickory BBQ sauce and a peppercorn rub)
Peppadew Peppers, marinated olives, Muesli bread, fresh goat cheese spread, pesto, artichoke spread, sun dried tomato’s and two different kinds of micro brews; one from Montana one from Hawaii.
We were probably distracted inside Whole Foods for over half an hour, picking out the most delicious lunch and dinner possible. Together we spent about seventy dollars on lunch and dinner and snacks for the rest of our evening out in Del Mar. We were going to eat in style!
Jumping back in the Subaru we made a beeline for the closet beach. We lucked out and found parking right at the edge at the beach down a side street. Since we were just going to be hanging out by the beach, eating food and drinking beer, we easily managed to find a spot that was just right. For the ones who want to indulge in some watersports, you’d probably have to travel a bit down south and get to the La Jolla Shores, where you can just pop into Everyday California and rent a surf board to shred some waves in SD, if that’s what you’re looking for!
Anyway, grabbing our beach chairs, the beer and food, we realized that getting to the beach here would be a bit sketchy. We had to run down a little ledge and than back up a ledge and over the rail road tracks. (Before a train came around the corner)

We actually managed that no problem and set up our picnic stuff along the cliff side just twenty feet from where the trains would pass. The cliff was pretty narrow and we didn’t feel like hauling all our stuff down to the beach thirty feet below us. As we were sitting down to eat the Coaster train went by us for the first time and were amazed how quiet it was; we barely even noticed it! We both looked at each other, so thankful we had made it over the tracks safely!
Than we cracked open some beer and enjoyed our beach side picnic lunch and a little frolic in the ocean waves after that. 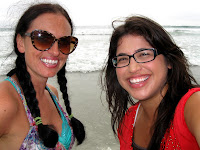 The great thing about the beach at Del Mar is it sits right across from Del Mar Thoroughbred Club, our final destination for the day. After our fancy lunch it took us just a few minutes to navigate our way to the race track. On the way in some one handed us free tickets into the track! Almost made up for the seventy bucks we spent on food today!
We made it into the track just in time for the third race. We stood in the grand stand for the third race cheering, waving our programs and watching the crowd going wild. Del Mar is so awesome for people watching.  It’s so fun to just watch all the fans, young and old getting into the race as the horses circle around the far turn. 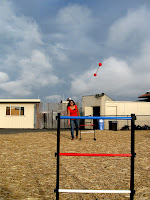 We watched the rest of the days races from the infield and made friends with these nice people who introduced us to a game called Ladder Ball. After that we spent the rest of the time before the concert making jokes about blue balls.
Not a bad way to spend a Friday.
Even if for the second year in a row, at Del Mar, I did not bet on Richard’s Kid and watched him win the feature handicap race of the day again.