A winter’s morning; Snow Shoeing and Ignoring my Neighbors 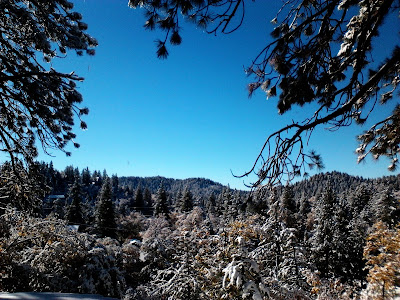 This morning, I awoke with a need, I could feel deep in my bones, that I needed to run! But my street is frozen, boo. Last night we received five inches of fresh snow.  So its snow shoeing in my neighborhood it is then. My New Year’s Resolution last year was to get a runner’s high. I do not think I have actually obtained a runner’s high, but I might actually be addicted to running; beats meth like the rest of my neighborhood! 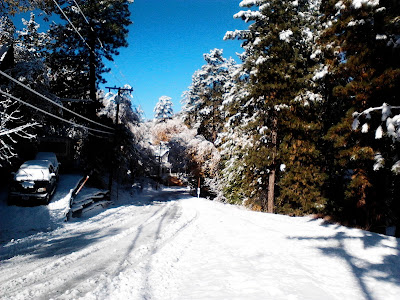 I was awoken this morning from a cat smothering sleep to the sounds of chain covered tires driving over ice; it sounded like breaking bones. What a great morning noise, well since I don’t have to leave for work any time soon. That’s the sound of my road never been plowed and therefore I can snow shoe on my neighborhood streets if I can just pull my body out of my warm cat covered bed. 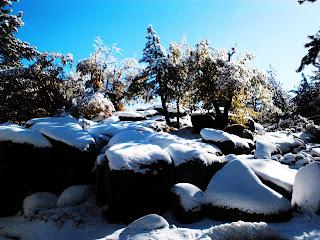 Sure enough, non of the streets in Deer Lick had been plowed when I ventured out into a just awakening morning about seven A.M. The sun had already risen over the snow covered hills in the distance and many trees were still covered in white, but it was dripping off the leaves quickly. Its only suppose to reach 43 up here today, but it seems with all the melting already in progress that its going to be warmer then that today.
Now, in most of my runs around my neighborhood lately, my neighborhood has seemed quite nice. Today I learned, what do tweakers like more then speed? Fresh snow! I met my local neighborhood drunk this morning. Well, I’m pretty sure he had more then just Folgers in the coffee cup in his gloved hand. Any one from the Running Springs area is familiar with our town drunk, Reggie. Well this guy might have been Reggie’s neighbor. I gave him a friendly wave as he approached me, and I was hoping he would take the hint that I had head phones in my ears, that I wasn’t ready to have a full fledged conversation, but he was enthralled with my snow shoes. In fact, he had 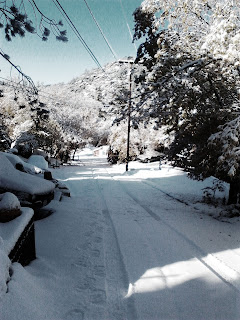 ﻿      When I told him, why you can buy your own pair for merely forty dollars on Ebay, he was dumb founded. I think forty dollars seemed like an awful lot of his meth fund, and Ebay? What is Ebay?!
He then proceeded to talk my ear off, about how he walked all over Running Springs in the winter time. Oh boy, I’m bound to run into this one again, I thought to myself. I finally managed to fanangle myself out of this conversation and continued up my nemesis, Upper Boulder. The steepest street in my hood. Its actually way, way easier in snow shoe’s, then running or walking it.
My pilgrimage around my neighborhood was actually quite nice once I lost Reggie’s bro. None of the streets were plowed, the snow was fresh and as I walked the now snow covered formally dirt roads, I hardly saw another soul. 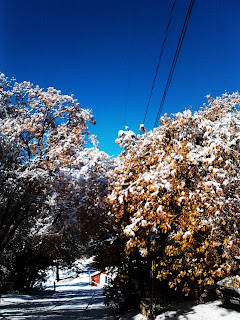 I tried to walk down the dirt road by Deep Creek Lake, but the puddles on this dirt road appeared to be about three feet deep and might have been a little frozen around the edges, but I didn’t feel like sinking in, soaking my boots and finding out. Can you believe people live on that dirt road? Could you imagine having to commute a dirt road with three feet deep puddles of slush, mud and snow? Mountain life! There is actually a super cool house at the end of this dirt road, over looking the creek with these old rail road cars built into the creek crossing. My plan was to hike back there and take pictures of the rail road cars in the snow, but that will have to wait for another day. I also would have liked to go across the highway and get some pictures, and also make my hike longer, but hobbling/ running across the highway in snow shoes does not sound very safe. I did almost two miles on this side of the highway, going up and down most streets, I got some awesome pictures. Hopefully tomorrow morning these streets will be defrosted enough that I can go for a run again.