A Delicious Pile of Meat; Eating Good at the Rennaisance Faire

By Amber Wood on Wednesday, April 23, 2014
As soon as I reached the faire ground I tripped over five tree roots in a row and stubbed my big tow at least three times.
I needed mead so that I could fly over these damn tree roots gracefully.
The Southern California Renaissance Pleasure Faire used to be held in Devore, California, thirty miles closer to my home ( And I swear way less tree roots to trip over!) About three years ago the group lost rights to the venue and now we voyage to Irwindale a few times every April to put on fancy costumes, sip on honey mead and dance around in the April sunshine with a bunch of other loony people who like things like medieval sword fighting, jousting, naughty humorous shows, cider oh yeah and boobs; did I mention there are boobs at the Renaissance faire? 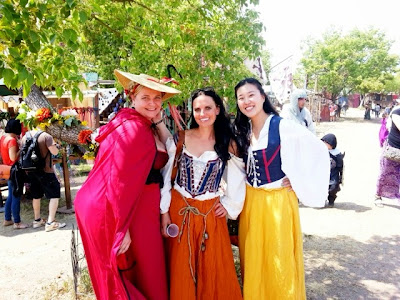 The Renaissance faire is where you go if you want to try on a assortment of leather hand cuffs.

It’s where you go if you want to eat a pile of pork ribs as big as your face ( a pile of meat!) or gnaw on a giant turkey leg. 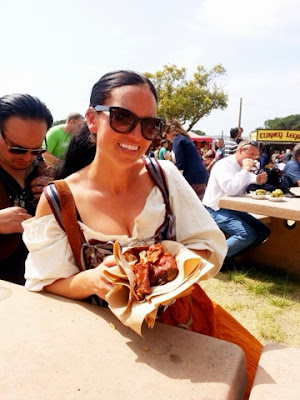 The Renaissance faire is where you check in your friends on Facebook at the privys. ( It’s tradition! Hey you do it once at the Renaissance faire and it becomes tradition!)
This could be why no one goes to faire with me, well except for other sick fucks like myself. Speaking of which last year we saw a girl at faire who had so much cleavage showing we came to believe  (Of course this conversation happened while waiting in the libations line) that she had been born with out nipples.
Poor thing.
We did not see her this year so I fear she may have succumbed to No Nipple Disease.
These are the kind of conversations you have at faire as you wander for hours down the dusty faire streets sipping on mead or cider.