By Amber Wood on Friday, December 13, 2013
I had been training to hike Mt Whitney for months.
Mainly I was just distance running with some longer hikes thrown in.
I felt like I was in okay condition to hike the twenty two miles of Mt Whitney, but I definitely could have trained harder if I had more time.
For weeks every one told me,
“You think you are in shape? Oh just wait until you hit the switchbacks!”
“You are used to running twelve miles at six thousand feet altitude? Well that will be nothing when you are on Mt Whitney”
There are ninety seven switch backs near 11,000 feet on the Mt Whitney Trail. You gain a thousand feet in elevation just in these two miles above Trail Camp.
I knew that would be the hardest part of the trail for our group of ten.
If we were going to suffer from altitude sickness, it would be there.
We had a lunch break at the bottom of the switch backs, by a little lake where the last camp ground before the summit sat, Trail Camp.
Than we started up the grey, massive sets of switch backs. 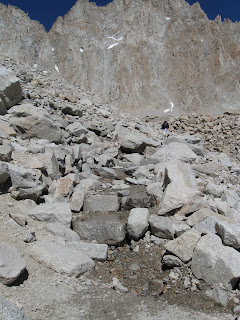 I was trying to make myself go slow.
I was trying to hike as slowly as I could make myself go behind my best friend. I didn’t want to go to fast up the mountain and get the altitude sickness.
But I’m a hyper chipmunk and cant control myself.
So I forged ahead of the group.
Maybe the high altitude was going to my brain, I started singing
“Ninety seven switch backs on Mt Whitney, ninety seven switch backs, you go around a turn you hike some more, ninety six switch backs on Mt Whitney!”
No one else had the energy to sing with me and they did not look at all like they were enjoying my little song as I practically jogged ahead of the group.
Luckily my bladder slowed me down as we had been drinking liter after liter of water and my constant one after another bathroom breaks slowed me down enough that I must have adjusted to the altitude pretty easily.
We took another break about half way up the switch backs, and when I remarked on how I thought they were not even as hard as I was expecting them to be, I was thrown a few dirty looks.
As in from everyone in our group.
One of the guys told me,
“Well, we are not at the top yet”
After our break we came to the snowy piece of the trail; that slowed us down a bit. 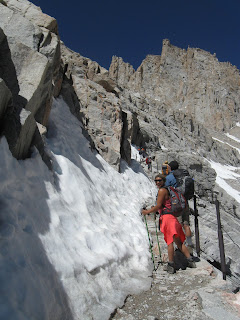 The drop off was pretty shear also so we were taking it pretty easy.
The switch backs did get a little hard at the very top, but when I saw this gorgeous view at the crest of the Sierras, well it just made the whole hike so worth it. 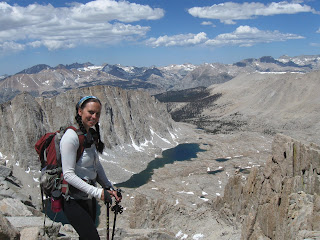 This is one of the greatest views I have ever seen.
From this high point over the Sierra Nevada Range you can look down into Sequoia National Park.
It is such a epically beautiful view.
That was worth getting up at three A.M. to hike and all ninety seven switchbacks.