4.6 and Pasta Salad with Feta, Spinach, Artichokes and Salami

By Amber Wood on Friday, July 18, 2014
Earth quakes are just a part of life in Southern California.
When you are a four month old kitten and you are chilling in the sunshine on a second story porch they are kind of terrifying.
To be fair I also thought the porch was going to break off the fucking house.
I have lived in this cabin for eight years or so and I have never been sitting on the porch during an earthquake in all that time.
Until today.
It has been a extremely weird few days.
“‘merica! and all that!”
I mean it is Fourth of July weekend and all but there is just something funky going on with the weather and the earth and my pets.
Maybe I have just been hanging out with my extremely hippie non GMO friend as of late but it seems shit is going down!
Yesterday; ridiculous thunder storms, hail and flash floods.
Last night and this morning my bulimic cats have been puking up a storm, and this morning my cat was puking up blood, causing me to ask
“What the fuck is wrong with you?”
as he meowed, scampered and played all night and morning. No joke he kept me up all fucking night, purring and crying, it seemed super weird until 10 A.M. when my entire house started shaking.
And than exhausted me, started asking myself, did those bulimic cats know something?
The cats and I were chilling on the porch this morning after I ran an intense four miles (almost 600 feet elevation gain!) when the house started to shake like crazy and being the Californian that I am I knew it was a earth quake, but seriously, being a Californian you always have to wonder, is this it, is this the one?
And I thought to myself if it was than fuck yeah, yesterday was a good day to go out on top
But it wasn’t, thankfully, my last day here on earth.
The earth stopped shaking, I conversed with my buddy across the street (hadn’t even felt it, less than a minute ago) and life goes on. 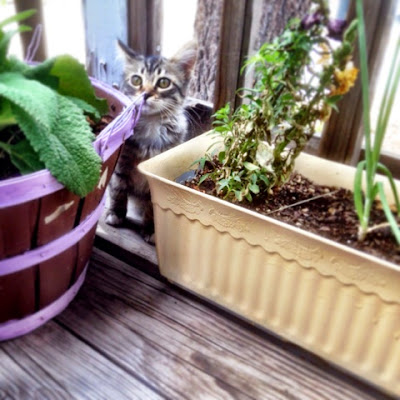 Except for this poor little baby who is still shaking an hour later.